Residents To Be Relocated After Shanty Town Fire 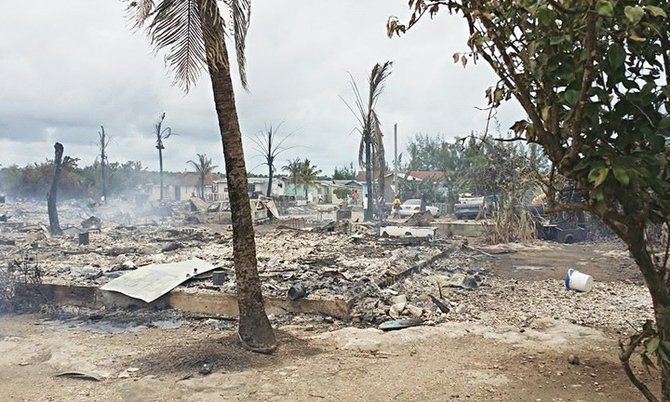 The scene of devastation at Sand Banks, Abaco.

THE government is seeking to relocate more than 150 people displaced after a fire devastated an Abaco shanty town last week.

“We understand how serious this situation is and we are sympathetic to those involved in it and we are moving as quickly as possible with this,” he said, adding that the government should reach a conclusion on this matter in “another couple of weeks.”

“Everything would have to go strictly by building codes,” Mr Curry said. “We have to prevent things like this from happening again. I’m personally in consultation with the minister of housing who is also the minister for environment. We are moving very quickly. We want to make a better environment for residents to live in.”

He said illegal immigrants, who were displaced when last week’s fire wiped out more than 70 homes in the Sand Banks area, will be among those given temporary accommodation when the government finalises its decision.

“Anytime you have a tragedy like this, the government’s first priority is a utilitarian effort, providing a temporary shelter to those who would’ve suffered,” Mr Curry said. “The immigration policy is still in force and I’m sure the Department of Immigration will use due diligence to bring under control the immigration problem on the island.”

As for the property on which the Sand Banks shanty town was located, Mr Curry said it is private property whose owners are in talks with the government to have it secured following years of challenges with preventing illegal construction on the land.

Mr Curry said there has been an outpouring of assistance from charitable groups seeking to help displaced residents, most of whom, he said, have moved in with family members in the surrounding community.

The displaced include 104 adults, 36 children of school age and 15 infants.

Regarding the incident, a 23-year-old man, Joel Josue, pleaded guilty after being charged last week with damaging and endangering property by the wilful and negligent use of fire.

According to a government report on shanty towns last year, Abaco is home to the biggest shanty town population in the Family Islands.

Combined, its three shanty town communities – Sand Banks, the Mud and Pigeon Peas – were said to have more than 1,000 homes.

Please someone tell me this was a mis-report. There is no way the Bahamas government is seeking temporary shelter for illegal immigrants. I don't believe it...Mr. Rolle must have reported this story incorrectly.

The only place illegal immigrants should be relocated is back to whatever country they illegally migrated from.

“Anytime you have a tragedy like this, the government’s first priority is a utilitarian effort, providing a temporary shelter to those who would’ve suffered,” Mr Curry said. “The immigration policy is still in force and I’m sure the Department of Immigration will use due diligence to bring under control the immigration problem on the island.”

Mr. Curry must be a jackarse...the only way the Dept of Immigration can bring the immigration problem under control is to deport people who are here without proper documentation.

I totally agree...Their temporary shelter should be the detention center.

Perhaps Government could revoke the license of some of the hotels on the island (pick one or two at random) and kick the owners and any tourists there OUT - and turn over the keys to the rooms to these "who would've suffered" immigrants.

Or maybe there are some multi-generation Abaconian families who can be kicked out on the streets to make way for them.

Yeah, that's a great idea. :-) I guess the only thing wrong with the Bahamas (in their mind) is that it's full of Bahamians.

This is insane. This government and the politicians are gravely insane. Yes it is a sad situation that occured no denying that and I am sympathetic but not so much where i disregard the law. Law is Law. This governement spending OUR money to house illegal immigrants. Im sure majority of them are here illegally. This is the time where they ask each and every one for their papers and if they dont have any rights here legally they should be relocated to the DETENTION CENTER. The others who are here legally, I have no problems with them finding a decent, liveable place to stay.

This right here is like a sign for illegals to come. Our slogan may as well be " Come one, come all, we welcome illegal immigrants of all kind. No question asked".