Teams From Africa And Middle East Expected To Shine 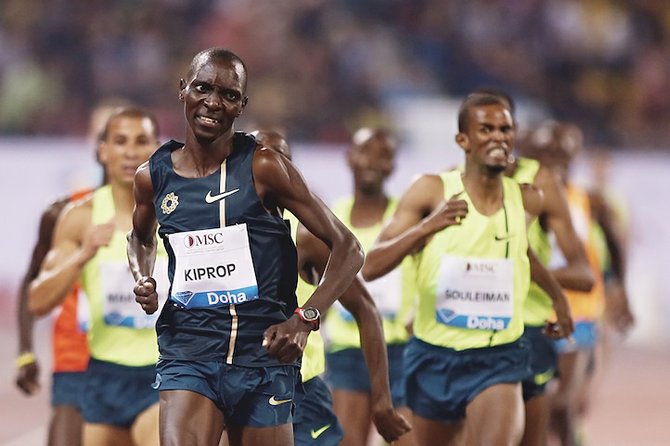 Asbel Kiprop of Kenya wins the 1,500m at the IAAF Diamond League in the Qatari capital Doha, Friday May 9, 2014. (AP Photo/Osama Faisal)

WHILE the focus of the Bahamian public and much of the crowd at the IAAF World Relays will be on the more popular sprint events, teams from Africa and the Middle East may eventually steal the show with arguably the best chance at setting new world records in their respective events.

A total of 74 athletes (49 men and 25 women) will represent six countries in the region known for consistently producing the top middle distance and long distance runners in track and field.

The seldom seen 4x800m and 4x1500m events will take centre stage when the athletes from this region take the track.

Ethiopia, Qatar and Bahrain will both participate solely in the 4x1500m, while Uganda will compete in the 4x800m.

Nigeria will participate in the traditional sprint events from 4x100m-400m.

In interviews with the IAAF, Kenyan officials expressed their interest in fielding a balanced team.

“We are very determined to do well in the categories we have entered for,” said David Okeyo, vice president of Kenya Athletics. “We hope to constitute a strong team that will make the rest of the world feel our presence in the short distance competitions this time round.”

“We want to show the world that Kenyans are not only a force in the middle and long distance but also relay competitions,” said Kenyan track and field president Isaiah Kiplagat.

In the women’s 4x1500m, the Kenyans will again be the favourites as they recently set a new world record in the event just last month.

At the country’s national trials for the World Relays, Mercy Cherono, Irene Jelagat, Ann Karindi and Perin Nenkampi finished in 17:05.72s, two seconds faster than the time set by the University of Tennessee in 2009.

A total prize purse of USD $1.4million will be paid by the IAAF for the men’s and women’s races at the inaugural edition of the meet.

Any team who breaks a world record in Nassau will be awarded a $50,000 bonus by the IAAF.

Mike Sands said the public should expect history to be made in the distance events with the talented field scheduled to compete.

“The Africans are coming and they will target some records. Of course the 4x800 and 4x1500, which are not often run events, records will also be in jeopardy. We must appreciate that those events, particularly the 4x800m, are often run in the US college system and when we find that a school like Penn State University has the leading time in the world, that is made up of college kids,” he said.

“Take into consideration these are elite athletes coming to run these same events. So when they put these teams together you can envision a world record being broken,” said Sands.