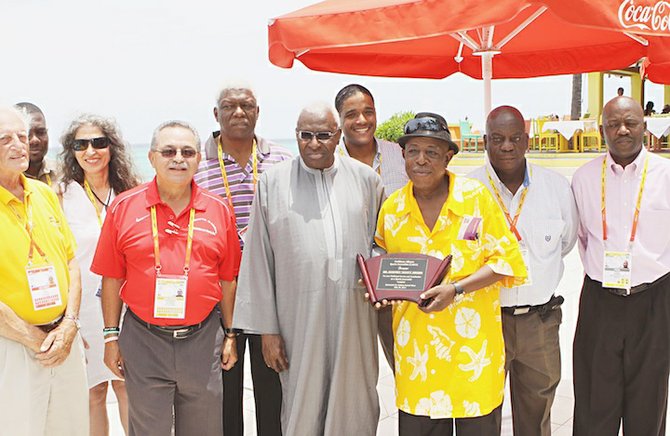 AS sports in the Caribbean continues to develop, a group of the region’s top journalists plan to ensure that the business of sports journalism will also develop to meet the growing demand.

To that end, the Caribbean Sports Journalist Association was officially launched during the inaugural IAAF World Relays Bahamas 2014 over the weekend.

The group of journalists, writers and photographers was officially endorsed by IAAF President Lamine Diack at the launch reception at Compass Point Beach Resort this weekend.

The original organising committee includes Michael Bascombe of Grenada, Andre Lowe, Kayon Raynor and Anthony Foster, Kwame Laurence of Trinidad and Tobago and the Bahamas’ own Brent Stubbs, who have been discussing the importance of unity among the industry in the region.

“We are hoping through CASJA, that we can discuss and ensure with event organisers that the logistics and accommodations for the media are handled in a proper manner. Sometimes we travel to events and are faced with a myriad of issues, including accreditation, accommodations with the hotels, access to venues and the internet,” he said.

“These are the sort of things we are hoping our members can benefit from and another is the issue of training. From time to time federations have various training sessions for their sports and there could be something involved for the media as well. We understand that sports is moving to a different level in the Caribbean, therefore the sports media has a role to play and we have to move to that level as well.”

The idea for the group was first conceived years ago after journalists in the region experienced a number of challenges, particularly at the most recent editions of the CARIFTA games in Jamaica, the Bahamas and Martinique.

“Way back in London in 2012 we met at the Olympics and spoke about it. Those meetings continued last year in Moscow where we also discussed it and only last month we decided that we will surge ahead in terms of formalising,” Bascombe said. “It is not only track and field, but sports media in general. So no matter what sport you cover, CASJA will be a representative of the sports media.”

Journalists from around the region have been very receptive as well.

Former world champion Ato Boldon of Trinidad and Tobago  has expressed his interest in CASJA. Boldon is now a television broadcast analyst for track and field and NBC Sports.

“We are hoping that as the membership grows, we will also get people with various ideas in terms of a structure. How we want it to run and that will be formalised when we have a broad membership. We are inviting everyone who is involved in sports media to be a part of us,” Bascombe said. “Many female sports journalists have expressed their interest because they feel their should be some level of diversity. We have had responses from journalists as far as Suriname and their has been interests from the Hispanic countries, the Dominican Republic, Puerto Rico and Cuba, so the involvement of people continues to grow and in the coming weeks you will see more and more people join the process.”