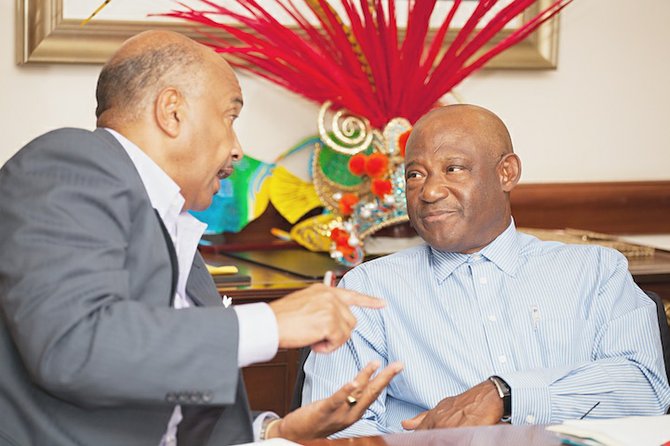 Commissioner Max Gibson and Paul Major, chairman of the Bahamas National Festival Commission, discuss plans to create an economic stimulus for the cultural industries with the Bahamas Carnival.

MORE details have been announced for the proposed Bahamas Carnival - including celebrations, balls, concerts, cultural shows and street parades.

The event is due to be staged during April and May next year.

JunkaMania is a new event that will showcase Junkanoo music and other Junkanoo inspired folk forms such as drumming and dance. Bands will perform original music. There will be a student version of this event, showcasing school bands, marching bands and youth groups performing original compositions inspired by Junkanoo rhythms.

The all-star Bahamian concert will feature the top ten local finalists from a carnival song competition and a Grammy award-winning artist.

Midnight Rush is a massive street rush aimed at drawing thousands to participate in Junkanoo without the confines of competition. There will be no costumes and no organised lines, while the motto is “Don’t Spectate. Join the Rush”.

Road Fever is the original Bahamian masquerade street party that will close out the Bahamas Carnival. It is a costumed parade incorporating live and recorded music. Competitive party groups of varying sizes will dance through the streets in a procession.

The costumes will incorporate indigenous material, such as straw, sisal and Bahamian fabric. The intention is for costumes to be much lighter than typical Junkanoo costumes to allow for greater freedom of movement.

During the course of five weeks, starting on Easter Monday, there will also be a series of private parties and events that fill out the calendar for the entire carnival season.

In a statement, the Bahamas National Festival Commission said: “The core events are all uniquely Bahamian and in substantive ways showcase Junkanoo and our indigenous music.

“The decision to name the festival Bahamas Carnival was not one that was taken lightly. The Bahamas is a brand unto itself with international recognition. Carnival is a universal label that over 200 cities around the world have adopted with tremendous success. With over 200 carnivals all over the world, who is copying whom?

The decision to hold the event in May was taken after examining the tourist seasons - the months of April and May are part of a slower season for the economy. September and October, which are the other slow tourism months, were ruled out because it is typically the height of the hurricane season.

The commission said: “We recognise members of the cultural community have serious concerns about the level of investment in cultural development over the years by the government. However valid those concerns may be, they do not negate the benefits a Bahamas carnival will bring to the Bahamian cultural community.

“All around the world carnivals have proven themselves to create economic opportunity for small businesses, which use their talents and creativity to innovate new products and services to sell to the captive audience generated by a carnival. Recording artists, for example, who have been one of the most neglected groups, will gain significant exposure from the Bahamas Carnival, both locally and internationally as the Commission will see to it that the 25 top songs from the song competition are played on US radio stations with high listenership from the Caribbean diaspora.”