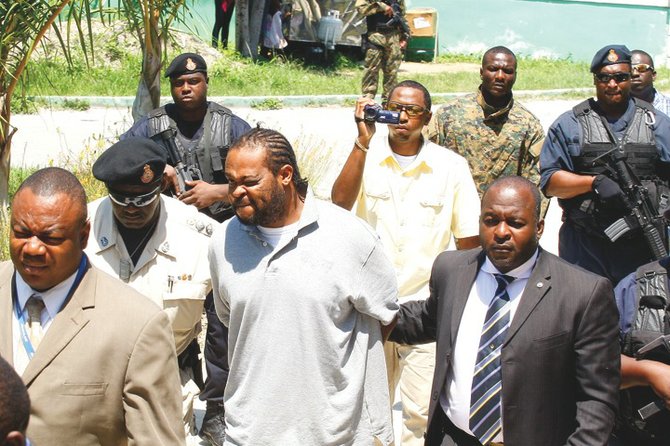 THE Court of Appeal has delayed its decision in the appeal of two men contesting a conviction for their involvement in a $6m drug smuggling operation.

Lawyer Murrio Ducille and his clients, Stephen “Die” Stubbs and Dion Minnis, appeared in the appellate court yesterday arguing what he claimed were a number of irregularities in the Magistrate’s Court surrounding wire tapped evidence.

Stubbs and Minnis were convicted of the drug plot in Magistrates Court in August 2012 along with 58-year-old Selva Hudson, of Sisal Avenue. They were accused of conspiring with 51-year-old David Arlington Colebrooke between September 5 and 30, 2009, to import and possess dangerous drugs in Williams Town, Exuma, with intent to supply.

Evidence revealed that the 3,935 lbs of marijuana came from Jamaica and was dropped off in Williams Town. Colebrooke was on the run at the time of the trial and was still missing when a verdict was handed down to his co-accused.

At the time, the sentencing magistrate told the defendants the punishment was based on three factors: their existing record, the amount of drugs involved and the men’s participation in the smuggling operation based on the evidence.

She sentenced Stubbs to four years in prison and a $50,000 fine, with an extra year if the fine is not paid by the end of his sentence. Minnis and Hudson were given five years and three years respectively.

At the last hearing before the appellate court on February 27 this year, the judges informed Mr Ducille that the same argument concerning the legality of the Listening Devices Act had been before the London-based Privy Council involving Melvin Maycock, as the evidence in that case was obtained through such means.

The judges suggested that if this question was the core of their appeal, it would be best to await that court’s ruling before proceeding on with the other arguments.

On April 17, the Privy Council ruled that the Listening Devices Act was legal, but sent the matter of Maycock and others back to Magistrate’s Court on the basis that the appellants be allowed to investigate the lawfulness of the authorisations given for wire taps to be used.

Yesterday, when this ruling was brought to Mr Ducille’s attention, the lawyer said the ruling supported their appeal. Justice Christopher Blackman said: “As I read it the Privy Council ruled the Listening Devices Act is legal and constitutional.”

Mr Ducille responded that this was the case, but his argument was that certain conditions, as noted by the Privy Council, had to be met for the authorisation of listening devices.

The lawyer noted that the authorisation document purportedly signed by the Commissioner of Police at the time was brought into effect by an assistant commissioner, which he claimed was inadmissible.

“The learned magistrate admitted it into evidence,” Mr Ducille said, adding that “he was not the maker of the document, he had no knowledge of it.”

Justice Abdulai Conteh responded that the officer worked in the organisation where authorisation “effected the operation.”

Mr Ducille responded that his evidence was hearsay, though Justice Stanley John and his colleagues were not in agreement.

The lawyer noted another instance in the trial where hearsay evidence was admitted in trial that was not an exception of the sections 38 and 39 of the Evidence Act.

Mr Ducille recalled the evidence of Patrick Clarke, who testified about coordinates he had taken from a GPS (tracking device) and had passed on to pilots who took him to photograph the area of those co-ordinates.

The photographs, he added, were later revealed to be inaccurate based on the coordinates of which he had previously spoken.

Mr Ducille also noted that phones that were tapped could not link his clients to what the police were investigating.

“How were they linked?” Justice Conteh asked.

“They got certain recordings, knocked heads and then came to the conclusion that it was Stubbs and Minnis,” the lawyer replied.

In a brief response by prosecutor Neil Braithwaite who relied on written submissions filed to the court, Mr Braithwaite said he was not of the view that the Privy Council’s ruling in the Maycock case supports any argument made by the appellants.

He further shot down the hearsay and irregularity claims made about the assistant commissioner of police bringing a document to court to enter into evidence as well as the evidence of Clarke.

The court asked Mr Ducille if he believed the sentences imposed on the appellants were appropriate in the circumstances, adding that the appeal was only against conviction and not sentence.

The lawyer had no issues with the sentences.