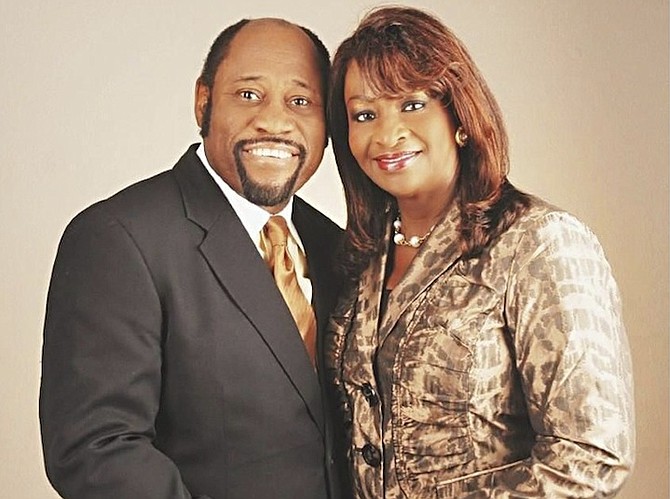 The Bahamians killed in the crash with Dr Myles Munroe and his wife Ruth in Grand Bahama. From left, co-pilot Franhkan Cooper (top), pilot Stanley Thurston (bottom), Dr Richard Pinder, Lavard and Radel Parks and their son Johanan, five. The identity of the ninth victim of the crash, a visitor from Africa, has not yet been released.

Prime Minister Perry Christie and Minister of Transport and Aviation Glenys Hanna Martin yesterday visited the crash site at the Grand Bahama Shipyard, where the Lear 36 jet went down on Sunday killing Dr Myles Munroe, the president and founder of Bahamas Faith Ministries International, and eight others on board.

Mr Christie told reporters that the government needs to ensure the investigation into the accident moves quickly and to make policy changes if needed.

Ms Hanna Martin said representatives from the US National Transportation Safety Board Transportation Board (NTSB) and from Bombardier, the manufacturers of the aircraft, are due to arrive in Freeport today for the start of a full-scale investigation into the crash.

The search for the cockpit voice recorder, she said, is crucial in determining what led to the “terrible incident.”

A team from the Flight Standards Inspectorate began its preliminary work at the crash site yesterday, gathering information, documenting the scene, and taking photographs.

Because the jet was a US-registered aircraft, Ms Hanna Martin said it was necessary for the NTSB to be involved in the investigation.

“The investigations will be a coordinated effort between that Bahamas Civil Aviation Authority, the US NTSB, and the manufacturers, and they will begin to move forward in locating the cockpit voice recorder to see what information that it gives.

“So right now it is really an investigation and we want to discourage people from speculating because it’s lots of that (happening), and it is not helpful. The inspectors are on the ground and it will be a combined cross-sectoral effort that will review the circumstances and help us understand exactly what it was that happened and led to this terrible incident.

“A key and critical piece of information will be the cockpit voice recorder, and whether there was a data voice recorder, but we are not sure of that yet, but that will greatly assist in understanding what happened here,” she added.

Director of Civil Aviation Ivan Cleare said that the pilots were given the “all clear” by Air Traffic Control to fly to Freeport.

“The weather was good enough for them to fly yesterday,” Mr Cleare said. “Of course, sometimes the weather deteriorates and the pilots would have to make a decision.

“But they were given an update on the weather as they would have come in, and it would have been up to the pilots to accept an approach or decline the approach,” he explained.

Mr Christie spoke to reporters around 1pm after visiting the crash site. He said that Dr Munroe’s death has had a “profound impact” on the country.

“We must ensure that wherever the answers take us, that if it has policy implications we can effect whatever changes we have to using this as an example of it,” he said of the investigation.

“I wanted to visit the crash site to get a sense of what happened,” he added. “When any horrific accident takes place and there is a loss of life, it is a major occasion in a country as small as the Bahamas. When it happens for someone who is an iconic leader, then it becomes a more profoundly impactful experience for the country.”

“I ask myself why would God take the life of someone who was one of his angels, one his disciples, one of his apostles,” he said, referring to Dr Munroe.

Mr Christie told the leaders of Bahamas Faith Ministries International (BFM) that life must go on and that they must put in practice the teachings of Dr Munroe.

“We are going to have to find the right way to celebrate the life of Dr Myles Munroe. He has made an extraordinary and defining contribution to the Bahamas, and worldwide.”

Dr Munroe and his wife Ruth, both 60, were on their way to Freeport for the Global Leadership Summit. Also travelling with them were BFMI’s senior vice president Dr Richard Pinder, 59, and youth pastors Lavard Parks, and his wife, Rudel Parks, and their young son, Johannan.

Piloting was Capt Stanley Thurston, 62, with co-pilot Franhkan Cooper, 34. Another passenger, believed to be a visitor, who has not been identified was also on the plane.

Despite the tragedy, the conference went onto as scheduled yesterday morning at the Grand Lucayan Resort. It was a sombre moment for those attending and conference officials as they sang songs of praise and reflected on the life of Dr Munroe.

Banners with photographs of the world renowned spiritual leader hang prominently in the lobby of the convention centre.

Ambassador Andrew Young, an American politician, and a close friend of Dr Munroe, spoke to the gathering. He said that he was blessed to have known Dr Munroe and spend time with him. He told the BFM family that the presence of Dr Munroe will always be with them in spirit.

Leo Douglas, a member of BFM in Freeport, who communicated with Dr Munroe minutes before the crash, was devastated by the news.

“I got a text from him (Dr Munroe) saying that they were about to land, and I said I would meet him at the hotel,” he recalled.

A special prayer service was held at the BFM headquarters in New Providence last night.

Weather and the airworthiness of the aircraft were not a factor in this tragedy. Bottom line here: A former Bahamasair pilot like Stanley Thurston should never have been piloting a high performance jet like the Lear 36 with an equally inexperienced co-pilot. It's most unfortunate that Myles got what he was prepared to pay for when it came to the operations of his very expensive and dangerous toy. Ending up in a junk yard full of recycled dump is not the way any of us would have wished for him to go...but.. as Myles himself used to say: "The Good Lord goes about doing his work in the most mysterious of ways!!"

This is not a mean statement, unfortunately it is the truth. It was a very old toy and servicing is questionable. How did they end up so far off. its a tragic and am so sorry for the loss of so many lives.

I take it you believe the jet itself belonged with the recycled dump material in the Grand Bahama junk yard, but not the ill-fated passengers. With all that I've heard about the duo at the controls of the jet, I'm inclined to believe the crash was caused by pilot error rather than equipment failure or weather. But we shall all have to wait on the official findings of the NTSB, assuming the jet was indeed registered in the U.S.

You can bet the property and life insurers facing possible big claims from this tragedy are consulting with their lawyers and sharpening their pencils rather than grieving for the loss of life and future of BFM without its key man. Hopefully BFM had the life of Myles well insured!

Then we must look at the possibility of sabotage.

The murder count may be 109 as of 5:30 p.m. Sunday, November 9, 2014. but there was a perfect storm. Those who have ears let them hear. "How long will they kill our prophets, while we stand aside and look?" Bob Marley

A 1970's jet with 10 diffrent owners and lots of rotations is always suspect, but the weather was nasty i was in the area driving at the time of the crash and you could bearly see the road , we had big wind gusts and possiably a few down gusts or micro bursts. the plane was off the aligment of the runway by quite a bit and it was way to low . A wind gust could have driven him down but not 2000 ft. The tallest crane on the ship yard 4 miles from the runway is in the 300 to 400 ft range and they are all lit well with red lights.

So they will be investigating the 40-year old plus records of the aircraft, the cockpit recorder, the weather conditions and the pilot/co-pilot competency. They had too many odds against them simultaneously sadly.

NTSB officials will no doubt be interviewing individuals like you who were in the area experiencing the weather conditions at the time of the crash. The Lear jet had the full complement of instruments necessary for a properly qualified pilot to land it safely in virtually blinding rain conditions with a cross wind of 20-25 knots. Higher wind gusts from varying directions would have made for a much more challenging final approach to the active runway. It really would have taken an intensely explosive microburst (very severe downdraft) to force the jet down to the altitude it was flying at shortly before crashing quite a distance from the airport. A pilot not adequately trained or uncomfortable in flying such a high performance jet by instruments alone in bad weather could well be the cause of the crash. All of this is speculation though and thankfully the NTSB is involved. If we had to wait on any agency of our Christie led government to investigate this crash, we would not learn anything for many many years to come, if at all.

Here's what several Bahamasair pilots are apparently saying: Absent the logging of sufficient instrument only hours in this type of high power low lift aircraft would cause many a pilot to forgo trusting their instruments and instead attempt to fly VFR (Visual Flight Rules) in blind conditions where IFR (Instrument Flying Rules) would be required. To fly VFR you need to at least be able to see the ground and hopefully be able to distinguish it from the horizon. In very bad weather conditions you would need to fly dangerously low in order to see the ground. Doing so at slower airspeeds in a high performance plane with low wing lift flying characteristics is as sure a recipe for disaster as one can get. Assuming no equipment failure and that the plane had doppler radar capability for detecting microbursts, the likely ruling by the NTSB will be pilot error. Sad!