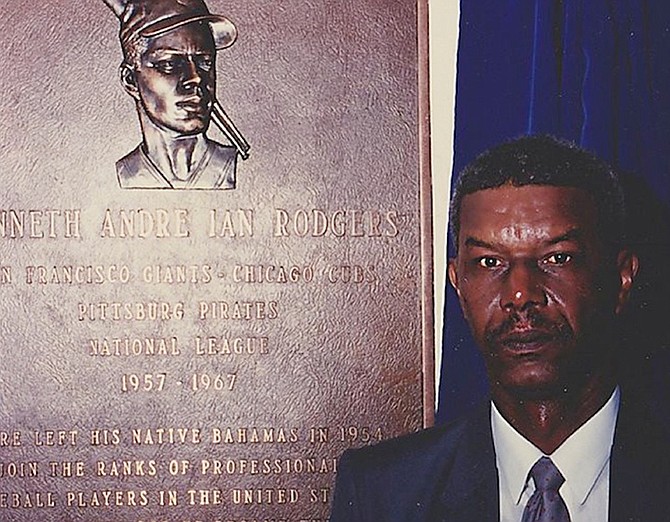 With the new Andre Rodgers Baseball Stadium set to be completed in 2015, the infrastructure will create a myriad of opportunities for local players, baseball development and the country’s sports tourism product.

Architect Michael Foster will be responsible for the stadium’s design and said the Bahamian public can look forward to a state-of-the-art facility that will be completed in a timely fashion.

“Where we were being practical about expenditure, the Prime Minister added to that expenditure by saying ‘this is what I want.’ He wants 8,000 seats rather than 3,000, whereas we were being frugal knowing the state of the country’s affairs, but a lot of this is being driven by the sports tourism initiative. I think the government is looking at the bigger picture and that means a bigger sacrifice and that means spending the money to do it. Baseball deserves it. They have arguably the top feeder system in the country and they have produced the major leaguers,” he said.

“The Dan Clayton Company does a grandstand package, so the job of the government now is to build the substructure. The locker rooms are framed to carry this stadium so basically it can go up with relative ease once the structure is solid. Then you can fit out all of the necessary things the facility will have. I see a fast track programme so it should move quickly. A lot of things will happen in the near future and a lot will be determined over the next few weeks.”

Foster indicated that preliminary plans are already underway for the Bahamas to become a destination for Major League Baseball spring training.

“My understanding is that there are plans afoot to bring Grapefruit Baseball here by 2016 for four weeks with a three game series here every week. If that happens the impact of it will be wonderful and immeasurable for what it can do for this economy,” he said.

Several of the country’s current professional baseball players were on hand at the groundbreaking ceremony and explained why they were eager for the completion of the project.

Antoan Richardson said the new stadium should serve as a means to attract even more prospective athletes to the game.

“I’m hoping that it sparks the interest of more kids to join baseball and continue the interest of kids at the older ages who were veering off because there was no other place for them to go and progress,” he said. “I remember sitting in the office in 2011 when they first spoke about it, so it’s good to be a part of its groundbreaking, actually seeing it start to come into play and things are being done. I think now we can start to think about having a stadium, having somewhere to play and even having somewhere to even come home and train.”

Richardson is currently a free agent after spending last season with the New York Yankees.

Originally drafted by the Baltimore Orioles in the 27th round of the 2001 amateur draft, Richardson stayed at American Heritage School in Delray Beach, Florida, until he was drafted for the third time, this time by the San Francisco Giants in the 35th round in 2005. He went on to play in the pipelines with both the Giants and the Atlanta Braves until the Braves called him up to the MBL, where he made his debut on September 4, 2011.

He was called up for the second time, September 1, 2014 by the New York Yankees where his most memorable moment came in Derek Jeter’s last at-bat where he scored on Jeter’s game winning-single.

“Hopefully, having the stadium will inspire us to go on to bigger and better things like spring training, so hopefully we can even see some of our major leaguers with their teams to play spring training games, or exhibition games, whatever it may be, it’s an opportunity for the Bahamas,” he said.

Albert Cartwright, is a current two time Minor League All-Star for the Reading Fightin’ Phils of the Philadelphia Phillies organisation.

Cartwright, who has played professional baseball since 2007 when he was selected by the Houston Astros in the 36th round out of Polk Community College before he was acquired by the Phillies from the Astros in 2011.

“We all played in the old stadium, I was about 12-13 at the time playing against the older generation like Mario, Eddie Ford and those guys, teaching you the game on the field its a huge benefit and something that the younger players deserve to have,” he said, “And to be able to play at home in your own Bahamaland, would be tremendous honour for the guys coming up so we look forward to see how this will help the development of the game.”

Anfernee Seymour Seymour, was chosen as the 197th pick in the seventh round by the Miami Marlins in last year’s MLB draft.

Expectations are so high for the highly touted outfielder, from American Heritage High School in Plantation, Florida, who received an over-slot signing bonus from the Marlins worth twice his slot value of just over $200,000.

Seymour, 19, hit .245 in 98 at-bats for the Marlins’ Gulf-Coast League affiliate while leading the team in steals with 11.

“It’ll be a pleasure to me, because I was once young looking up to guys like Albert and Antoan, Greg [Burrows Jr], Geron [Sands] and those guys. I watched them play at the old Andre Rodgers stadium, so it’ll be a pleasure for me to be apart of this group of young guys playing in the new stadium, which hopefully will be built pretty soon,” he said. “It looks really good, I’ve been in the United States I’ve seen many different fields and this definitely has the potential to be on par with those facilities.”

Prime Minister Perry Christie said baseball players, like other athletes in the Bahamas, will now have an opportunity to compete at home at an elite level as baseball joins the local sports tourism industry.

“We will give our athletes who are baseball players the opportunity not just to have a centre for top competition but we are going to be able to build a number of baseball fields so that we can host events where high schools, colleges and camps will be able come down and be able to create this experience in the Bahamas that will contribute to sports tourism,” he said. “We are an island nation and development of our sporting infrastructure will reflect this. I happened to have been one of the principal players in [the Thomas A Robinson]. I was arguing for a stadium that would hold 30,000 people, so they built it for 15,000 and left provisions for addition. Because I knew when we hold international events we would have Bahamians come out too. We expect the same to be true with this stadium.”