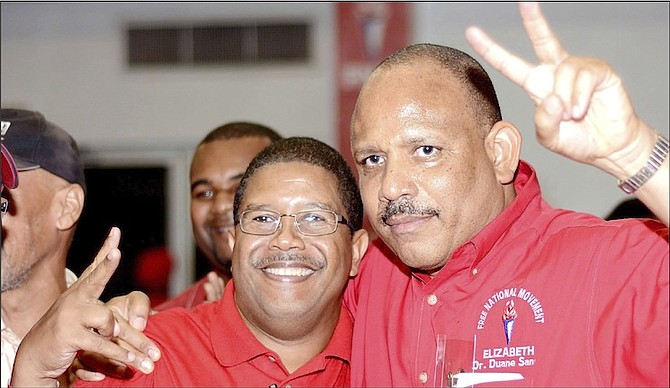 NEWLY-elected Free National Movement Deputy Leader Peter Turnquest and Chairman Michael Pintard pushed a message of unity as they spoke with reporters at the party’s headquarters in Grand Bahama.

It is the first time in the history of the party – since Sir Cecil Wallace Whitfield was elected leader of the FNM – that two of the three top positions are held by persons in Grand Bahama.

Dr Hubert Minnis was returned as leader of the FNM during the party’s national convention on Friday.

He is expected to travel to Grand Bahama shortly to meet with supporters.

“Now that the leadership debate has ended and Dr Hubert Alexander Minnis has emerged as undisputed leader of the FNM, I call on all party supporters to put aside differences and unite behind our leader and his leadership team as we prepare to present our plans for the future of this nation,” Mr Turnquest said.

On Wednesday, the party will release the official results of the national convention and introduce the full leadership team.

Mr Turnquest said that the leadership team will be a “formidable force” in the next general election.

“Having had the experience of working with Dr Minnis over the last two years and having weathered the attacks during that period, he has maintained his poise and his direction. I am confident, now that he is supported by a team that is 100 per cent on board, that we together will present a plan, and a face for this country that will inspire confidence, and that will get the job done,” he said.

The deputy leader said he expects there would be hurt feelings, but Mr Turnquest is confident that their plans and strategy will bring the party back together.

“At the convention, the leader signalled some of the plans he has to solidify and unite the party. I have no doubt that all of the contenders… will rally behind his leadership team. “We will not allow anyone, whether it is the media or other parties, who will try to create division, and to allow them to exploit any faction that may continue to have some difficulty. We will reach out across all our members and embrace them and their ideas. We have made deliberate efforts to reach all of our persons and our supporters, and I am confident they will unite and we will be a formidable force come the next general election.”

Mr Turnquest said that the delegates made a very significant statement when they elected Mr Pintard as chairman and him as the deputy leader.

“It obviously means that we understand the issues that face Grand Bahama, that the party understands the issues, and that we are put in place deliberately (because)…we have the ability to address them,” he said.

Mr Pintard, a senator, said the party will share its vision across the country for constructing a new Bahamas where industrious people are able to thrive and succeed.

“We wish to build a nation where opportunities do not depend on one’s political persuasion, but instead on willingness to work hard, smart, and honestly,” he said.

He said that Dr Minnis has pledged to work closely with the officers and members of the FNM on Grand Bahama in an effort to address the issues that confront the island.

“We are saddened by the tremendous hardship in this community and the absence of effective government leadership to address the cries of Grand Bahamians. In the weeks and months ahead, our leadership team will roll out its proposed legislation, policies, programmes, and projects,” Mr Pintard said.

Mr Turnquest added that “the nation is ailing and in need of a new prescription for the future.”

He noted that a real plan is needed to arrest crime and social degradation, provide housing and relief from aggressive banking practices, while expanding the country’s economic base in non-traditional products and markets.

Mr Turnquest added that there is a need for further development of infrastructure in the country, solving the vexing transportation issues in New Providence, addressing investment challenges in Grand Bahama, and opening up its market for further domestic and international development.

“We must move all obstacles and make the point that our people need jobs and opportunities now.

“Too many families are being dispossessed and falling into despair and hopelessness that their situation will not be reversed anytime soon,” he said.