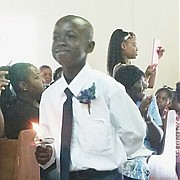 Craig Newton, who died after being hit by a shotgun blast when the weapon reportedly went off accidentally.

A NINE-year-old boy is assisting police with their investigation into the shooting death of an 11-year-old boy, believed to be his cousin, in Andros early on Saturday morning.

According to reports, the boys were playing with a shotgun at a home in Behring Point around 10am when the weapon accidentally went off.

The 11-year-old boy, identified by a relative as Craig Newton, was shot in chest and died on the scene, The Tribune was told.

Assistant Commissioner of Police Anthony Ferguson said the nine-year-old is not in police custody, but is assisting police with their investigation.

He also declined to comment on whether charges are expected to be filed against any of the parents.

“It is too early to say at this point if anyone will be charged or what the charges may be,” ACP Ferguson said.

“We do know that the children were left home alone, from our investigations there was no adult in the house at the time.

“From our information the weapon that was used was licensed, but I cannot say much more, other than a team from the Central Detective Unit in New Providence is in Andros assisting officers there with their investigations.”

Last year, a 12-year-old boy was killed and his 11-year-old brother was taken to a hospital after they were both shot while playing with a shotgun in Nassau Village.

According to preliminary reports, the boys’ father left the gun on a bed in a room where the two children were and went outside to get something from his car.

Astrio Rigby, 12, received a gunshot wound to his side, and his younger brother received injuries to his right leg.

The boys were taken to hospital by a private vehicle sometime after 1pm, but Astro died a short time after his arrival.

The 11-year-old survived the shooting.

No charges were filed in that incident.