Politicole: Minnis It Is (And What's His Name) 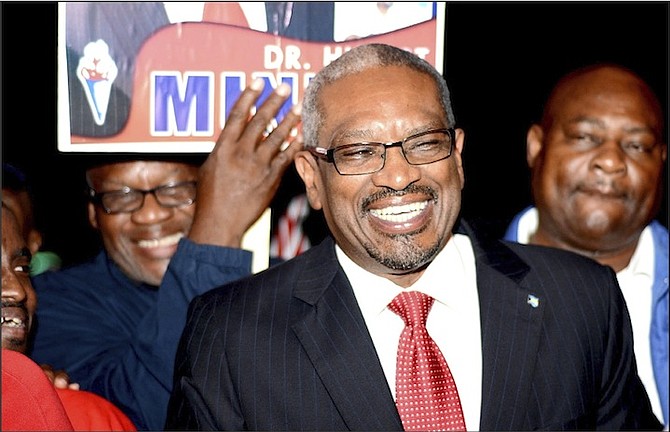 I paid a few trips to Parliament this past summer, to witness first-hand what Members of Parliament (MPs) get up to in the House of Assembly.

It was ... an education. But I can’t say I was surprised.

There was lots of boring and purposeless formality, as expected, and lots of men with big egos squeezing into tiny spaces and acting like little boys. Some were loud – too loud; I won’t call their names because it might be more fun to guess, and some were more composed, officious and less aggressive.

Some members made sure everyone could hear them downstairs, while some never said a word and gave just a few head nods or shakes, depending on whether they agreed with the dialogue.

Admittedly, there were about three MPs, maybe four, I did not know by name. Perhaps if I cared more for politics and political shenanigans I would have known every detail about each member that made it to the House in the last election, but I didn’t. This interest is fairly new for me, but I’ve observed a lot in a short time.

One of the men I did not know was Peter Turnquest. He reminded me of a church mouse; quiet, but if he caught your heel he’d nip the crap out of it.

Turnquest immediately struck me as brainy. My first impression was also that he was pretty intelligent and very well-prepared. Annoying though it was, he continually offered his share of rebuttals when things got heated on the floor and he felt the need to speak up.

He wasn’t particularly impressive, though I was curious to see what made him different. He performed like the annoying kid in school who would cause you to miss five minutes of recess because he had a “good” question for the teacher, or one who would cause the whole class to get punished because he was the only one who told on the troublemakers.

And then I realised he reminded me of myself; his unassuming nature, seemingly mild-tempered but rather high-strung, someone who would not stop talking until someone heard him. But most importantly, he was someone who didn’t appear to be someone you should underestimate. Totally me. But the similarities end there.

Now there are many theories about why Turnquest is now the deputy leader of the Free National Movement (FNM) coming out of their convention on Friday. I’m sure he was eligible because of his qualifications, although as I write this I’m not so sure what they are.

There are others who think he was chosen for his temperament, someone who wouldn’t create strife in the leadership of the party, someone who wouldn’t challenge the leader with independent, strong will and strong thinking. And then there are those who believe that Turnquest was just in the right place, having come along at just the right time, when people were tired of who they were looking at and decided he was new enough to make the party look and feel different, so it’s just sheer dumb luck that he’s there.

But whatever the theory, his newness presents a special challenge.

I remember coming home from one of my visits to Parliament and pointing him out on the evening news, and my mum said, “Who’s he?”

And just today my cousin called to find out what I thought about the results of the convention – she’s 10 years younger than me but this is our thing these days; we catch up on politics like two middle-aged women and fantasise over the possibility that we could actually have a properly functioning country someday soon – and when I asked her what she thought of him she said “who dat is?”

So, you see, Houston is not the only one with the problem.

Let me be very, very Bahamian: the man is now a whole deputy leader, but no one knows his name, let alone his face? That, I think, presents a little bit of a conundrum. How he manages it after now can either make his role as deputy leader a stronger post in the FNM, making the party stronger by extension, or it can break him politically and break the party too.

In truth, I suspect that this entire process of an opposition convention is going to take place again. By the end of next year, the FNM will gear up for another showdown and they will be choosing these people all over again – unless they learn(ed) something from all the fallout from their bickering and lack of direction and strength which led to them having this mini-convention in the first place.

I still maintain that the FNM is not a party ready to win a general election. Maybe with their leader securely in place – for now – and his deputy assigned, who should stay quiet enough not to outshine Hubert Minnis, maybe they can develop a real enough platform on which to build an election-winning campaign. But I have my doubts about that, too.

Because, already, what I’m hearing from Minnis about his desire to turn around poverty in the inner city, though commendable, is worrisome. I wonder if he actually has a plan to follow through with. You think if the inner city areas couldn’t have been ‘turned around’ they wouldn’t have been by now? My fear is that, for all his kindness – and I really do believe he is a kind man – he will be taken advantage of. I’ve listened to the talk and it almost sounds like there are many in the group he desperately wants to help who want him there because they think he’s Mr Moneybags. And his sidekick is not going to be, from the looks of things, strong enough to prevent him from being bulldozed by the very people he wants to help.

In parliament, both Minnis and Turnquest get steamrollered; though Minnis does not meet his opposition well, and says crazy, dim-witted things off the cuff, Turnquest does get a jab in here or there and he keeps talking anyway; he could care less who’s trying to shut him up. It’s actually funny to watch because it’s like the nerd on the basketball court, with the friend whose physical stature gives the appearance of a weakling, surrounded by jocks, and the nerd is being ignored and he keeps on talking while the weakling is being picked on and keeps answering back with statements that only make him get picked on more.

Maybe, just maybe, the FNM can get it together for five minutes long enough to seem serious enough to stand against the current Progressive Liberal Party (PLP) government. Goodness knows they have a mouthpiece now like never before.

Michael Pintard as chairman is probably the best thing to come out of this recent convention for the FNM. He may not always make sense, but he has some talented vocal chords on him to push his words around with the right amount of flair. And that’s the other thing; he’s a writer. He’s a word artist. He’s a creative artist. He’s accustomed to playing up a crowd. He knows how to get his audience’s attention in a way most other politicians/speakers can’t.

He knows which buttons to press to get people to listen to him and think twice about what he’s saying. He’s exceedingly confident – I believe some have described him as arrogant. That’s not all to say that people will just be inclined to buy into him hook, line and sinker, but he will be able to dazzle them long enough to make them think twice about their apprehensions. I guess, really, he’s charming. And so we’re back to that.

Leaders need some degree of charm and a great deal of confidence to get themselves heard, paid attention to and followed. They can’t just show up on the job, especially out of nowhere, never having been heard of or seen before, and expect to make a profound impact. They could be working their butts off and getting a lot done behind the scenes, but a big part of politics and political representation is the appearance of what a person is doing. I hate to say it, but, even if a politician is not doing anything and he looks like he’s doing something, people tend to believe that he’s doing something.

It’s just the nature of people. They are drawn to the Pied Piper types. Human beings enjoy the rush of being part of a groundswell movement that feels like it has its own heartbeat. And that’s why both the PLP and the FNM should not underestimate the Democratic National Alliance (DNA).

Turnquest and Minnis are good men, but good men don’t often make good politicians. On an election ticket they look good together and, for all intents and purposes, their partnership may be much better aligned than a Minnis-Butler-Turner partnership, but it won’t make one bit of difference if they have no mass appeal and even less difference if Turnquest remains a veritable political unknown, while Minnis remains politically deficient.

Very well written article! I couldn't agree with you more.

Why does the Deputy Leader have to be well known? What is the role of the Deputy?

Name a Deputy in the past (FNM or PLP) that was an exemplary, outspoken, charismatic politician.

Mr. Darren Cash said this is the team that DR. Minnis wanted. I believe Mr. Turnquest put his hat in the race the night before. It does appear to be very fishy.

I too believe that charisma is important because it can help with national appeal, but I would ask the writer to define what is her idea of a good politician in the Bahamas. It would seem that the answers would show how regressive our politics has been.

Bahamians haven't seen the need to elect persons who put country first and this should be a top core requirement for leadership.

A deputy leader of a political party and a Deputy Prime Minister are two different things .......... there is no post of DPM in the Constitution

Charisma has it's place but what I like about Dr. Minnis is HE'S DIFFERENT. I think he has good intentions which will take him to the top. I also believe we will see more of what he is capable of (all good) in the next few years as he will come into his own.

He represents a nice change to the political climate and with the abolition of Loretta Butler-Turner as his second in command, a definite end to the Ingraham era (thank you Jesus).

I believe that Dr. Minnis will make an excellent Prime Minister.

Anyone is better than CHRISTIE