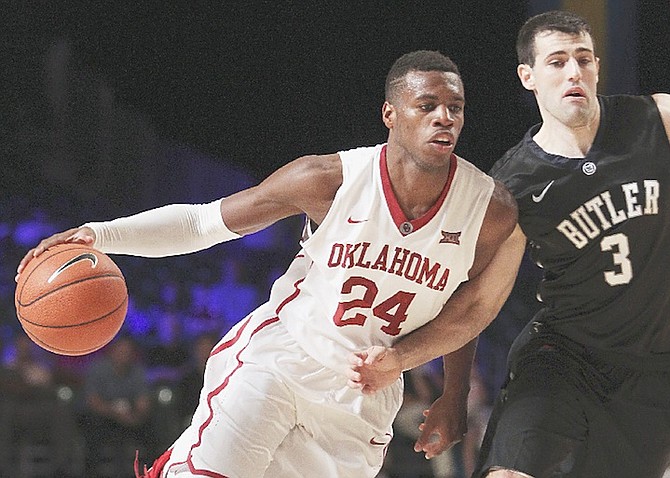 IT WAS a rough shooting day from the field for Buddy Hield, but a balanced scoring attack from the Sooners propelled them in the Battle 4 Atlantis final.

Hield finished with five points, seven rebounds and and two assists in Oklahoma’s 59-46 win over the Butler Bulldogs in yesterday’s semi-final at the Imperial Arena. Oklahoma will face the No.2 ranked Wisconsin Badgers in the final.

Three Sooners finished with three players in double figures and they scored 17 points off the bench in the nearly wire-to-wire win.

Isiah Cousins scored a side high 13 points to go along with eight rebounds, Jordan Woodard and TaShawn Thomas each chipped with 10 points while Dinjiyl Walker scored eight off the bench.

Hield shot just 2-10 from the field and 1-8 from three-point range, coming off his 24-point outing in the opening round. “I just tried to do the little things we needed to get this win. I tried to feed off my teammates listening to what Isiah and Jordan were telling me on the wing and we just tried to stay connected defensively,” he said. “We knew we would have to win the game on defence and we were able to make enough plays down the stretch to come out with the win.”

Kellen Dunham led Butler with a game high 17 points, but no other Bulldog scored in double figures. They shot just 24 per cent from the field and 17 per cent from three-point range.

Oklahoma was even worse from beyond the arch at just 11 per cent but the Sooners shot 46 per cent from the field.

In the first half Hield was held to just two points, but the Sooners’ bench play and balanced scoring attack kept them ahead.

Dunham’s three tied it at eight near the 15-minute mark, but Oklahoma responded with 15 unanswered points, apart of an 18-1 run.

The Sooners scored on back-to-back layups from Thomas and Woodard followed by a fadeaway jumper from Bennett for a six-point lead.

A steal by Hield led to a layup from Booker pushed the run to eight and Booker made two of three at the line on the ensuing possession for a 10-point advantage, 18-8 at the 10:40 mark.

The Sooners’ lead reached as much as 23-8 before the Butler scoring drought was broken when Andrew Chrabascz made one of two from the line. The Sooners took a 36-24 lead into the half.

Oklahoma head coach Lon Kruger said the quick turnaround of games presents a challenge for his team, particularly on offence, an area they look to improve.

“We know how tough it was going to be going into the ballgame with the short tunaround. What was good was our defensive awareness and we can take a step forward from that,” he said. “We need to create a little more flow and movement offensively. This group is very genuine in their interest in making plays for each other. We have alot of different guys who can score and playing against very good competition can help us grow in that area.”

In the second half, Cousins was the spark on the offensive end to help the Bulldogs at bay. He scored a pair of baskets, including a three-pointer from the corner to give the Sooners a 19-point lead, 47-28 with 9:47 left to play. Hield made his first three of the game with just over seven minutes left to play in the half.