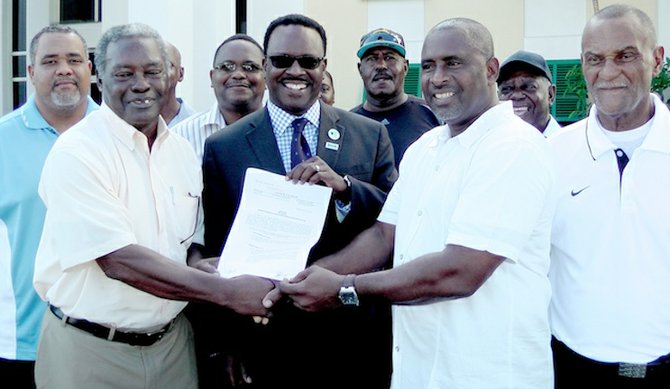 WITH the Baseball Baseball Association and the Bahamas Baseball Federation now coming back together under one umbrella, the Ministry of Youth, Sports and Culture is looking at the next phase of restoring the creditability of the sport with the construction of the new Andre Rodgers National Baseball Stadium.

According to Dr Daniel Johnson, the Minister of Youth, Sports and Culture, work on the new stadium is expected to begin in January. The state-of-the-art facility is expected to be erected on the plot of land opposite the Government High School where the Seventh-Day Adventist is currently hosting a Revival Camp.

“With the signing of this agreement, as a show of good faith on our part, I’ve instructed the National Sports Authority to get the architects and planners in this week because we have located the site for the reconstruction of the Andre Rodgers National Baseball Stadium,” Dr Johnson said.

“Once all of the associations see the plans, we hope to break ground the first week in December as we do a special tribute in honour of Andre Rodgers. We hope to have several of his former professional baseball teammates in the United States to visit the Bahamas as host of Antoan Richardson, our present Major Leaguer, when we will break ground for the new construction that should commence on January 1.”

The facility, when completed, should have a 3,000-seat capacity in the initial stage. There will be accommodations for locker rooms, vendors, lighting and green space. Additionally, there will be eight smaller diamonds erected for the use of practice fields and the staging of junior league programmes and tournaments.

Rodgers, a talented shortstop, was the first Bahamian to play in the Major League. He made his debut with the New York Yankees on April 16, 1957 and finished his career with the Pittsburgh Pirates on September 30, 1967. He died aged 70 in December 2004.

Once the baseball stadium is completed, Dr Johnson said work will commence on the construction of the new Churchill Tener Knowles National Softball Stadium, which was also demolished to make way for the new National Stadium. The new softball stadium will be located just across from the Banker’s Field at the Baillou Hills Sporting Complex.

The original softball stadium was constructed in honour of Tener Knowles, a resident of Grand Bahama, who was the second Bahamian to be inducted into the International Softball Federation Hall of Fame. He was enshrined in the class of 1991 as an administrator and organiser. He followed the late Leon ‘Apache’ Knowles, who was inducted in 1987 as a coach/player.

Additionally, Dr Johnson said the Bahamas Lawn Tennis Association is in the process of constructing a proper stadium court, the Bahamas Golf Federation is nearing the completion of their nine-hole course, the Bahamas Football Association is looking at upgrading their pitch and there will be a new multi-purpose indoor arena that will be built on a site to be announced.

“We’re looking at making the entire area a one-stop sports mecca,” Dr Johnson said. “There are talks with the hotel division of the College of The Bahamas with the idea of designing a small hotel that the college students will run so that we can host any type of games for athletes, coaches and officials.

“So we have a lot of things on the agenda that we hope to have established over the next few years.”