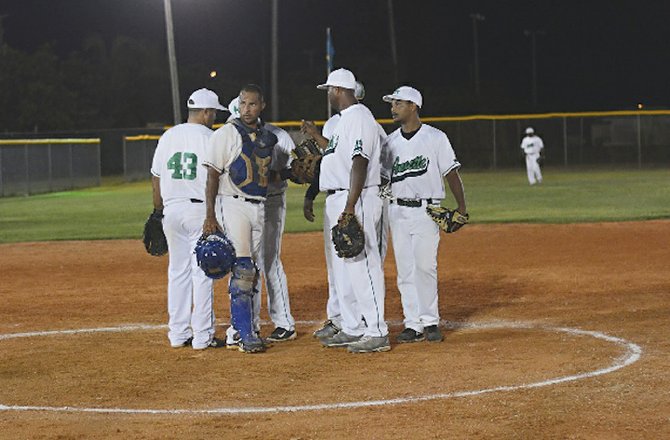 The Arnette’s Sporting Lounge Hitmen and their die hard fans celebrated last night as if it was 2013 all over again when they won their first New Providence Softball Association championship.

The defending men’s champions had every reason to as they came back and completed the back door sweep on the BTC Elite Warriors in the fifth and deciding game of their NPSA playoff series.

After avoiding being swept by the BTC Elite Warriors in losing the first two games of the series, the Hitmen brought out the brooms in the Banker’s Field at the Baillou Hills Sporting Complex as they pulled off a 17-14 slug-fest to advance to the Carl ‘Bang Bang’ Johnson best-of-seven championship series.

“It wasn’t the conventional way as I had expected, but we swept them the back door and that showed the heart of a champion,” said Hitmen’s manager Darren Stevens. “I told the guys that it wasn’t over. We are going to take it one game at a time and that is what we did. We believed in each other and now we are back in the championship to defend our title.”

But Stevens said they are going to be ready for the challenge.

The Truckers, managed by Perry Seymour, were in the stands watching, and from all indications, they are eager to get the series underway after they had a couple days off to rest since sweeping the Chances Mighty Mitts in three games last week.

But for Arnette’s Sporting Lounge, they just wanted to get back into the final and they played like they wanted it a little more than BTC.

Tied at 14-14 going into the bottom of the sixth inning, the Hitmen struck for three runs that got started with a one-out single by Keiron Munroe, highlighted by Rudy Fox’s run-producing single and ended with Adrian Pinder’s RBI field’s choice as they went ahead for good.

All the Elite Warriors could do is watch as relief pitcher Alcott Forbes struck out their first two batters Cardinal Gilbert and Deandre Rigby and Brad Wood, replacing Pinder at third on the defensive end, made a diving catch to rob Anthon Rolle of an apparent hit to end the game.

BTC had taken a 14-12 lead in the fifth inning as Richard Bain got a one-out RBI single and Eric ‘Papi’ Johnson followed with a two-run triple before Greg Gardiner got a RBI single.

But that was short lived as Arnette’s Sporting Lounge tied the score in the bottom, thanks to an error that sent Forbes home, while Hosea Hilton, limping on a bad leg and knee, scored on a wild pitch.

Pinder had gotten on base on the error that sent Forbes home, but he eventually died on third after Ken Wood made a dandy of a catch on a line drive shot by Rashad Seymour to kill the rally.

The defensive play came after Greg Gardiner made one in the top of the fifth, doubling up Jordan Gibson, who was hit by a pitch by Forbes and attempted to advance to second on a hit by Gilbert.

However, Gardiner made the line drive catch and picked off Gibson. Forbes then struck out Rigby to end the inning.

The game saw a couple of pitching changes, the first coming in the bottom of the second when Elite Warriors’ manager Erin Adderley relieved Avery Rolle of his starting duties as the Hitmen scored five runs on four hits to take a 9-4 lead.

Richard Bain came in from second and worked the next three innings before he was relieved by Cardinal Gilbert in the fifth.

As for Arnette’s Sporting Lounge, Duval Storr started and lasted mid-way in the third before Alcott Forbes came in from shortstop to finish off the job.

The biggest impact of all came against Forbes, who was greeted by Bain with a three-run triple as he faced his first batter. The Elite Warriors went on to score four runs in the inning before Forbes started to settle down.

And the Elite Warriors had the biggest blow of the game in the first inning when Sherman Ferguson crashed a two-run shot over the right field fence as they opened the game with a 3-0 lead.

But that too was short lived as the Hitmen responded in the bottom of the frame, thanks to a RBI triple from Angelo Dillet and a two-run double from Martin Burrows as they took a 4-3 lead.

The Hitmen never trailed until the Elite Warriors managed to tie the score in the sixth.