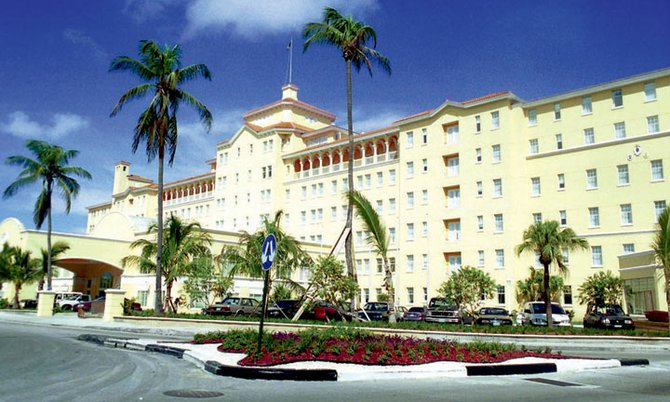 WHILE the Christie administration approved the sale of the British Colonial Hilton, it had no hand in selecting China State Construction Engineering Corporation to purchase the historic hotel and its adjoining property, Tourism Minister Obie Wilchcombe said yesterday.

This first public defence of the reported multi-million dollar deal, which has triggered a wave of criticism, came as PLP Party Chairman Bradley Roberts blasted naysayers in the FNM for hitting out against the deal.

“I think Bahamians might be concerned that it was sitting in the hands of the government. The fact is no, it was not a government owned property. I think that might have been the misconception of what was taking place here.

“It was negotiated between the two entities,” the minister added. “Other companies had put in their bids as well but it was the owners who made the final decision and we had nothing to do with that at all. Except for we had to approve it at the end of the day and the government sees no difficulty with it. I see no difficulty with it.”

When asked if he could place a dollar value on the Hilton’s selling price, Mr Wilchcombe said he was told that CSCEC agreed to pay Hilton owners somewhere between $60m to $100m.

However he added: “We don’t get into the details at times but I know they (CSCEC) are going to spend almost $700m (regarding the country’s GDP).”

According to Mr Wilchcombe, it was during a previous administration that the hotel was first sold. Mr Wilchcombe said a deal of this magnitude had been imminent for years.

The sale of the Hilton was formally announced on Friday evening. It has attracted criticism from some who feel it will give China a larger stake in the local economy. The CSCEC is currently building the $3.5 billion Baha Mar resort and has a $150m equity stake in that project.

In response to the critiques, Mr Wilchcombe said foreign direct investment on Bay Street was an important part in the transformation of the tourist hub which he said has not been successful in capturing the complete interest of visitors.

“The historical value of the Hilton and what it represents is precisely why some of the major hotel owners and brands would want to have it,” he said. “Baha Mar is going to be a tremendous draw in the western region of the island with the major brands they have then there and we have Paradise Island and Atlantis that have been attracting visitors for years.

CSCEC is expected to begin development on the project early next year. Mr Wilchcombe said in addition to the multi-million dollar deal, he plans to seek approval from the government to expand its incentive programme to get Bahamians more involved with downtown Nassau’s development.

Mr Roberts said in a press statement that it was a previous FNM administration who formed initial ties with the Chinese.

Mr Roberts said: “Did these men just wake up from their ‘red Kool-Aid induced Rip Van Winklesque cryogenic slumber’ and are merely talking out of their heads? Or maybe they were and are still just zombies. Those could be the only sensible explanations for their senseless banter and political posturing in the media.

“I strongly advise these gentlemen to wake up to the realities of the real world and come out of their cocoon. Our strongest diplomatic ally and trading partner, the United States, owes China more than $1.3 trillion. China is the largest foreign holder of US debt.”

He accused the previous FNM administration of neglecting Bay Street, an important and strategic component of the country’s overall tourism product offerings.

Mr Roberts added that the Christie administration is moving forward by turning its attention to the revitalisation of Bay Street and the redevelopment of the northern water front of New Providence.

Why would the Government have to defend the sale of the Hilton to the Chinese? Isnt the Government looking out for the best interest of the Bahamian people? We get 500 jobs guaranteed: cleaners, waiters, drivers, maids. How about asking the Chinese to rebuild all the schools, so that our kids and grandkids don't slide into planned and organized labour slavery? Its not the politics that rules the world, its the capital - and it is particularly concerning when the investor is a tyrannic system.

Grassroot- Should they sell everything to one group? It is not good for such a small economy to be dependent on the will of a single giant. Who owns the most jobs, own the economy- and the government. They already have Bahamar and now this? It would have been better to ask them to rebuild schools or maybe the College of the Bahamas. One should understand the wisdom - especially in the wake of the 2008 crisis - of a diversified economy- and diversified ownership in that economy. I remember when we thought Japan couldn't lose and where are they today? If China sinks- we should prepare ourselves not to sink with them.

of course Greentea, it is the most stupid thing to sell all to the same group. A small economy like the Bahamas can not afford concentration like that. well of course its not the Government that sells, its the government cronies that sell, bcz they know they get approval for FDI. I bet this was the work of father and son Bethel....

That was an amazing display by the Valley. Who funded them and who chose the theme? That person is either a prophet or the "man behind the curtain". The Chinese come to Bay St.

This is wrong on each level, are leaders sell out the whole country. Most of the BAHAMIAN don't see this ( more than half brain washed,I once were at fault but now I see ), why give them jobs when you can educate them. The ( EDUCATED ) Chinese / anybody is coming to the country to give us jobs, this hurts me to my core, the Bahamians should be giving the foreigners jobs to build up are country and not the other way around ( like America ), when I tell my American friends were I'm from there response is "WOW" you live next to the beach.... I tell them "it's a long,long,long story, a very long story, even the short version is long," are leaders put us back so far, we are in slavery again, The Bahamians don't own beach front property, we don't own big business establishment, so what is it that we own so? It will be stupid for all Bahamians to sit back and keep getting jobs, years down the line all the Bahamians can say they have is a "job", and struggle to keep a government low cost home. There's millions of dollars walking into the country, where's is it going? Why do foreigners have more rite than the Bahamian people? Why do we teach are youths to kiss foreigners hip? My wife cries when we read the Nassau news and see how the minority makes it bad for the majority.

Vince - "I tell them "it's a long,long,long story, a very long story, even the short version is long," that is the funniest and saddest statement I have heard all day. So true. Stay in the fight.

Vince - why do foreigners have more rite than Bahamian people? Its the money. Don't blame the foreigners, blame ourselves. We are quick in taking it, we certainly know what price to ask, we certainly don't know what value we give away to them for the few rubels we cash in.

You folks commenting on this article should know that the The Tribune website gets less than 100 hits on an average news day, which means there are relatively few of you posting and reading each others comments on this website each day. I've stopped commenting for that reason aside from posting the occasional comment to let you "less than 100" folks know why you are wasting your time posting comments to this website!

When the Chinese buy up this little $8 billion economy, then we can all speak Mandarin. The USA will soon take note that the Red Flag will be blowing right across the street from its Embassy .................. then what will be the response??????????

the Chinese already have. all they need are the strategic assets: 1. Freeport (Hutch Whampoa), 2. Bahamar, 3. Hilton, 4. Land in Andros, 5. Port in Abaco, go figure. They certainly wont buy the straw market.

Why not? All the products are made in China...

the schools will soon be teaching a second language class for all Bahamians, it will be called English....

mudo, we sold the country once before to the Colombians, this time we are smarter and getting more money, our previous teachers taught well....

I could assure you that the State Department has taken note. It makes sense from a strategic perspective for the Chinese to have a partner in the form of the Bahamas next to the USA. The US have Taiwan and now China have The Bahamas. Queen eats pawn, now is your move US.

I wouldn't want these discussions turn into anti Chinese and other Asian who are a good and proud people's. We should the welcome Chinese as visitors, investors and residents.The Chinese government's masquerading as a private corporation is the main issue to focus on. The vast majority of Chinese citizens do not trust their government. Look at what is taking place on streets in Hong Kong. Eventually, it will spread to China and that scares hell out the red communist government as it should. Do they have trillions, very much so but for how long?

The guardian reports "It was noted on a number of occasions on Friday night that the government had been instrumental in ensuring that China could purchase the Hilton, and that Chinese investment in the Bahamian economy can only be expected to grow. ". Did they or didn't they? According to the guardian, they bragged about the part they played in completing the deal.