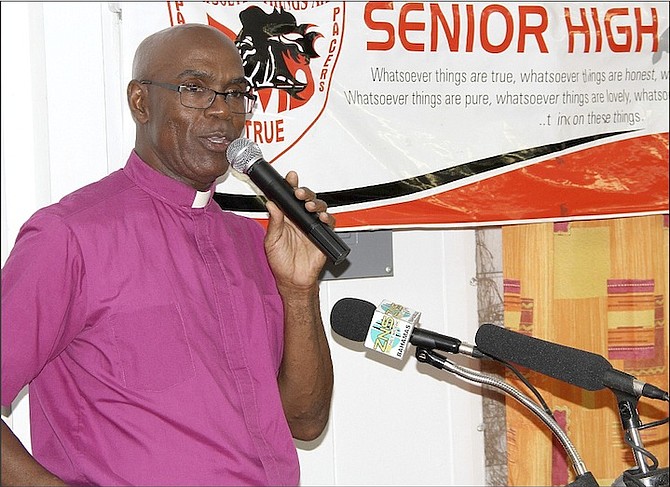 ARCHDEACON James Palacious yesterday called on the government to implement a national family planning programme and employ guidance counsellors and truancy officers to “double” the government’s preventative efforts towards crime.

At a “Father’s Day” breakfast held at the RM Bailey High School, Archdeacon Palacious said while he wasn’t “being insensitive” towards government implemented programmes, such as Urban Renewal, if the government continued “the same old, same old” it will continue to get the same results.

“As a short term measure, we really need a comprehensive national family planning programme,” he said. “We have to teach people, sex is a beautiful thing within a certain context. When you start to deal with 60-odd per cent of the children born out of wedlock, we cannot build a society like that.

“Too many of our youngsters are forced to be out there, some of them into prostitution or anti-social behaviour. Unless we can change that, we’ll continue this downward spiral that our society continues to head into.”

“We don’t have money to pay $25,000 a year to a probation officer or social worker or guidance counsellor, but we could find money to put people and house them up in Fox Hill prison,” he said. “I’m putting it to us that if a $25,000 a year civil servant prevents two children from going to prison in a given year, they already break even. If you prevent three, you’re making money. Forget the social fallout and all that kind of stuff. We’ve got to be real.

“The social fabric is falling apart, and that’s what we need to attend to. You could afford to sell British Colonial Hilton to whomever; you can find another 5,000 jobs wherever.

“But if we continue to produce the kind of animals that we are producing, nobody will come here, and no one will want to come out of their house to go anywhere.”

According to RM Bailey Principal Collin Johnson, the “Father’s Day” breakfast was conceived while he served as principal at the Government High school in 2010, when he said out of “every 10 persons that came to register, there were nine mothers.”

He said the decision to hold the breakfast in October as opposed to June is to “get fathers involved at the beginning” of the school year.

Yesterday’s breakfast was the third to be held at RM Bailey.

Mr Johnson said he hopes the initiative will be copied in other schools throughout the educational system.

Yeh Jimmy just like you ....... screwing da maid and all. Not a good messenger. But I agree with the idea. Thats why we have to get rid of the Haitians, Bahamian familiies are having one/two children and Haitians having five/six children on average.