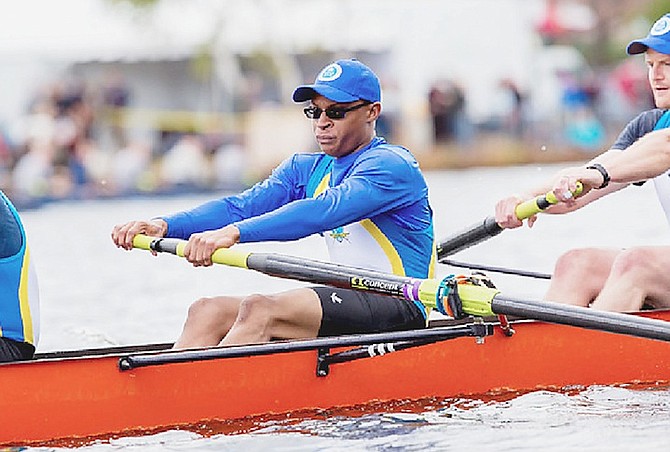 A BOAT representing the Nassau Rowing Club plied the waters of the Charles River at the 50th running of the prestigious Head of the Charles Regatta, the world’s largest rowing race, on Sunday, October 19.

This year’s regatta attracted over 400,000 spectators to the shores of the Charles River to watch roughly 11,000 competitors from 776 clubs from around the world.

The NRC fielded a coxed four in the Men’s Championship 4+ event, featuring Kyle Chea, founding and current president, and Tevin Creary-Roberts, another founding member. Social members Dane Gallagher and Eric Sipos completed the crew, and Jessica Panico, who coxed Vassar College to gold in the Women’s DIII Eights at the 2010 Dad Vail Regatta, sat at the helm as coxswain.

The event consisted of 15 boats featuring crews from programmes such as Harvard, Stanford and the University of Washington. Cambridge University and the Sydney Rowing Club brought an additional international flare to the race.

Unfortunately, the NRC crew could not race in the Club Fours event, as Chea was selected to race for The Bahamas at the Pan American Sports Festival with double scull partner, Brendan Ginns.

HOCR rules state that any rower competing “under the name of their nation’s governing body in national or international competition in the current calendar year is ineligible for the Club event-division.” The crew was only finalised a few weeks out of the regatta, with two rowers withdrawing due to injury.

Throughout the race, cheers of “Go Bahamas!” could be heard from supporters on the banks and bridges. Commentators along the length of the river were sure to broadcast that the Bahamian crew was on its way, and one at the Cambridge Boat Club even joked that she was available if the club needed a coach.

“Rowing in the first crew from The Bahamas in the history of HOCR is such a great honour,” said Chea, who represented his alma mater, Vassar College, in the Men’s Alumni 8+ event in 2012.

“The Charles is unlike any race I’ve rowed so far, it requires a combination of fitness and technical ability, so it’s an interesting challenge. It’s an historic and iconic regatta, and I hope this inspires other NRC members, and other aspiring Bahamian rowers.”

Creary-Roberts reflected on his first HOCR. He currently rows for the Rollins College varsity squad.

Faced with some equipment trouble and a stiff 17-mile per hour headwind, the NRC crew placed 15th in the event, completing the three-mile course in 21:50.27. Sipos sat at the stroke seat, setting the rhythm for the boat, with Creary-Roberts linking it to Gallagher and Chea in the bow. The crew was sure to highlight their roots, affixing Bahamas flags to the boat, and wearing caps donated by Baha Mar.

“Conditions were difficult, and as a crew, we had to figure out how to adapt during the race without fully understanding the idiosyncrasies of each other’s rowing style,” Chea reflected. “We had no false hopes given our competition, we came to row our own race. Having practiced once and then having to race against some crews composed of much bigger guys that have won major championships, I’m satisfied.”

“We certainly heard and felt the love and support as we raced down the course,” Panico said. As coxswain, who gave technical feedback and tactical commands to the crew, she noted: “For group of rowers who had limited time practicing together, we produced a high quality of rowing, and we really pulled off a race to be proud of.”

The crew was not the only one representing The Bahamas that day, as another NRC rower, Emily Morley, raced for Ithaca College in the Women’s Collegiate Eights. Ithaca placed fourth in a field of 30 boats, earning them an automatic entry for next year’s regatta.

When asked about NRC’s plans for the 2015 regatta, Chea plans to “submit some club entries next year and see what we get.”

“Competing at HOCR when we can will be a great way to showcase how the NRC is developing rowing in The Bahamas, and will hopefully attract some coaching talent to facilitate that development,” said Chea.