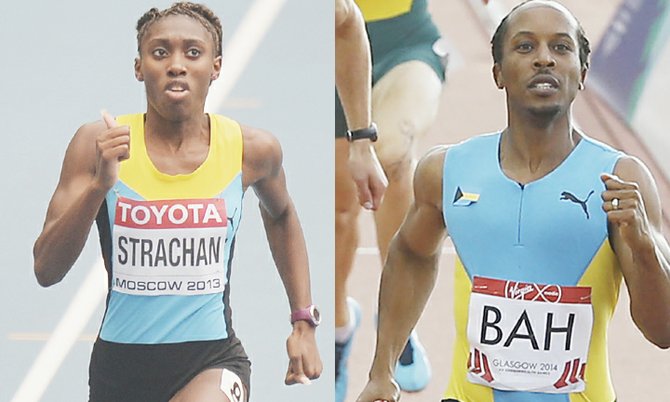 SPRINTER Anthonique Strachan and quarter-miler Chris ‘Fireman’ Brown will both represent the Bahamas on the Americas team for the International Amateur Athletic Federation (IAAF) Continental Cup September 13-14 in Marrakesh, Morocco.

The Americas, the defending champions of the Continental Cup that was held in Croatia, will be competing against teams from Europe, Asia/Pacific and Africa, the four regions which have replaced the national teams from each country in which was then called the IAAF World Cup.

On November 21, 2008, in response to growing feedback from the public and the sport’s stakeholders, especially the TV rights holders, the IAAF Council agreed to change the format of the event and the IAAF World Cup was transformed into the IAAF Continental Cup.

The changes were made to the composition of the participating teams in order to make the event more understandable and interesting for the public, and to achieve a better balance of strengths among the teams. It should be noted that the IAAF World Cup was instituted over the weekend of September 2-4, 1977, in Düsseldorf, Germany.

The complete list of the Americas team for the Continental Cup will be released today, but Victor Lopez, president of the Association of Panamerican Athletics, the organisation that is responsible for the Americas region, said they are delighted this year to welcome both Strachan and Brown on what he has called the “Americas dream team.”

In order to be selected to the Americas team, the athletes must adhere to the following requirements:

• In the relays, more than one athlete from a particular country may be selected as part of the relays pool; the relay teams that compete for Team Americas may be composed of athletes from the same country or from different countries.

• The selection will be based on the IAAF-recognised performances up to and including August 3.

According to Lopez, Strachan will represent the Americas in the 200 metres for women, while Brown will be a member of the American men’s 4 x 400m relay team. Both events will take place on the final day of competition on Sunday, September 14. This will be Strachan’s debut in the meet, while Brown will be back for his second appearance, having competed in 2006 in Athens, Greece in the 4x4 relay as a member of the Americas team that was runner-up to the United States.

“We have a very good team that we will be announcing tomorrow (today),” Lopez said. “It’s what we call the Americas Dream Team and we are happy to have Anthonique Strachan competing in the 200m and Chris Brown in the 4x400m relay from the Bahamas. They are two very outstanding athletes and we welcome them to being a part of this year’s team. I think we have assembled some of the best athletes from within our region to help us go to Marrakesh to defend our title. We feel very confident that we will be able to achieve that goal.”

Lopez said the selection committee was able to produce a team that will represent the region very well. He noted that the athletes were selected based on their performances.

She trails five Americans, led by Tori Bowe (24-year-old) with 22.18 from a Diamond League meet in Eugene, Oregon on May 31 and is just ahead of Jamaican superstar Shelly-Ann Fraser-Pryce (28), who did 22.53 at the Jamaican Invitational on May 3.

At the same meet, Grenada’s Commonwealth Games champion Kirani James ran a world leading time of 43.74 to beat American LaShawn Merritt, who got second in 43.92.

James, 22, will not be competing in the meet because of his school commitments and will be replaced by Merritt, 28, in the 400m.

No other Bahamian track athlete is listed in the top 6 to be eligible for either an individual or participate in a relay event, although LaToy Williams is 10th in the men’s 400m with his 44.97 that he ran to win the Bahamas national title on June 28.

congrats to these excellent runners!