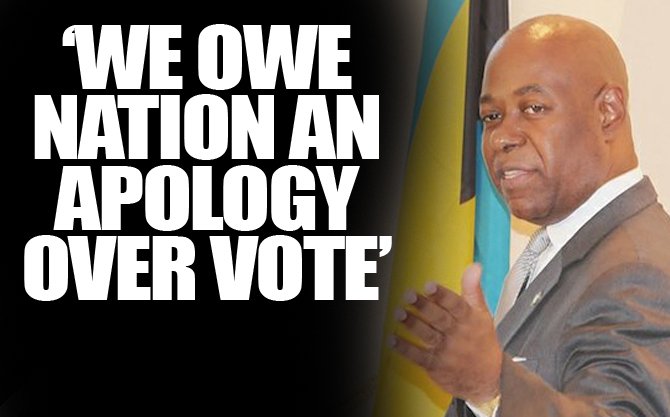 TOURISM Minister Obie Wilchcombe said the Christie administration “owes” the Bahamian people an apology for its decision to go against the majority “no” vote of the January 28, 2013 gaming referendum.

However, he said, the government could not avoid moving forward with regularising number houses in the country.

Mr Wilchcombe explained yesterday, as he spoke to reporters after a tour of a hotel on Rose Island, that it was the government’s initial intention to respect the outcome of the referendum, which cost taxpayers $1.2m.

However, he said, this position was abandoned after the Central Bank of the Bahamas warned that unregulated web shops were expected to harm the financial services sector.

As the government prepares to debate the newly tabled Gaming Bill and regulations, Mr Wilchcombe insisted that the government was not concerned with criticism from detractors.

“We do owe the public an appreciative apology, for first of all participating in the gaming referendum and secondly we had to revisit it,” Mr Wilchcombe said.

“But when the Central Bank raises a red flag and says a problem is developing we have to, because of our financial services sector being in jeopardy (and) facing difficulties, then we had to make a decision and the best decision was to regulate (the sector). We had the Attorney General travel around the world and talk to individuals to ensure that we were putting the legislation the way it needed to be done and it could stand up to scrutiny. We think we have done a good job.

“We are not concerned about criticism, we took a giant step that should have been taken years ago, but couldn’t be taken years ago (because) the Bahamian people weren’t ready for it. We had a referendum for instance (and) Bahamians said ‘no’.”

Before the 2013 referendum, Prime Minister Perry Christie pledged that his administration would abide by the results of the non-binding poll. After the vote, he ordered web shops to shut down their gaming operations; however a group of web shops filed a court action to block their closure.

Earlier this year, Mr Wilchcombe revealed the government was considering regulating and taxing web shops and that the taxes would be retroactive to July 1.

The government’s choice not to stick with the gambling referendum results sparked a firestorm of criticism not only from religious groups, but from the Free National Movement.

Party leader Dr Hubert Minnis told The Tribune in the lead up to the tabling of the Gaming Bill that such a move should warrant an early election. Dr Minnis has insisted that any decision to revert from the referendum would signal a shift from democracy to dictatorship. He has lashed out at the government for wasting public funds on the vote.

Bahamas Christian Council president Ranford Patterson has said he would not support future referendums because of the government’s failure to honour the gambling referendum’s results.

Why is it the our government is always forced to do something? Legalize web shops, join the WTO, introduce VAT, obey the privy council, sign 20+ TIEA's. Are we sure we are independent? Can't we set our own course? I feel like an eight year old. We are 41 years old, can't we make our own decisions? The answer is NO. I don't know if we need to waste time electing a government; we should just appoint a joint committee of the U.S., U.K., WTO, World Bank, OECD to rule us.

What a moron. Central Bank tells them an illegal operation will harm our economy so their only answer is to legalize the criminals after we voted no. Now we're told to expect about 12 million in revenue which is not enough to even pay the government's fuel bill every friggin month....

Man the PLP are just dumb. They are in way over their heads....

You voted "no" to regulating the webshops.

You didn't vote "no" to them being allowed to continue - that wasn't even an option on the referendum paper.

Sadly, 99% of Bahamians did not understand the English used in the questions, and assumed that's what it meant, even though nowhere did it actually say that.

I am so fed up with this whole topic. Can we just legalize it and move on?...Please?!

He did say they "owe" an apology,but notice he did not apologize. He is nothing more than an ass wipe.

The Bahamas is a member country of the United Nations sice September 1973.There never was a true sovereign Bahamas since then and never will be. Still,no matter the chaos, Jesus always in control.BELIEVE.

If Perry Christie, Minister Of Finance, did not realize the implications of all of this illegal money flowing through the system, he should resign immediately. This is our future we're talking about, in the hands of a man who tells us on numerous occasions that he knows nothing.

This is a bunch of crap and they know it. Mr. Christie's intention was to always legalize the web shops whether the people wanted it or not. He just didnt expect the people to say no, since so much actually play numbers. So yea it was a shock to him, but on the other hand he already promised the number bosses that hey this is going to get legalized. They are his supporters in regards to money so how can he go against them? The PM and all of his officials are a bunch of hypocrites, liars, pretenders, thiefs and much more. Obie came up with a lame excuse to why we wasted 1.2 million on a referendum! My Lord My Lord, help us!

They can have their apology back and shove it up their ***.

The 1.2 million dollars that was wasted should be put back out of their pockets immediately and if they cannot come up with the taxpayers money they flushed down the toilet they need to be locked up for negligence. Make them accountable.

Christie, Wilchcombe and Maynard-Gibson need to fervently deny that they and the PLP ever received a dollar from the illicit activities of the illegal web shops to fund their political interests. They cannot just say that the FNM did it so we did it. Politicians and political parties that take funds from criminal enterprises are guilty of aiding and abetting the laundering of the proceeds of crime and the Bahamas has statute laws with dire consequences for all such individuals engaged in money laundering activities. Perhaps much more importantly though, if Christie, Wilchcombe, Maynard-Gibson and the PLP did in fact take money from the racketeering mobsters like Craig Flowers in exchange for promising to pass legislation legitimizing or regularizing their criminal enterprises, then these same politicians and their party are guilty of receiving bribes and all concerned should be prosecuted forthwith to the full extent of the law. Given Maynard-Gibson's position as Attorney-General and her role and efforts to date in strongly lobbying for the illegal web shop owners and their illegal industry, she would have to abstain from any involvement whatsoever in the investigation and prosecution of all those guilty of accepting illegal bribes from the numbers' bosses.

If any "Honourable? Comrade member of the House of Assembly (matters not if sitting on the government or opposition benches) even more so after having received an appointment to cabinet, they have an obligation to arrange their private and "campaign" affairs so as to prevent real, potential or apparent conflicts from arising. How can you even stand on the floor of the House or sit around the nation's cabinet table, to discuss the "regularizing" of the numbers rackets, knowing your very election to the Peoples House, was directly/indirectly financed by monies from the numbers operators? Granted, while there may be little to no sense of "Honourable" left in bones of some sitting up in that useless House, hopefully we are still a nation of laws. I am angry at what is being done in name of the "people." It's a damn shame. Comrade Senators, oh yes, this includes you too, so watch your damn asses. The "real people" is watching how "Honourable" you really is? We do still respect our laws, don't we?

bullshit, just know no re election for all of you old timers

The PLP owes the Nation an apology not only over the vote but for portraying itself as a creditable force for change at the last election. This Party prayed on the gullible within the electorate, pretending to them that they had the answers to crime, the economy, national health etc,etc. They told lie after lie on the campaign trail making outlandish promises that anyone with a grain of knowledge of the Party's history and past performance in office, would have known was fantasy. They rubbed salt into the wound by holding a pointless referendum wasting $1.2m dollars of public money. Approaching the half way stage of their 5 year tenure they are behind on every single initiative. They have delivered NOTHING and accounted for NOTHING. And Wilchcombe believes the Party owes the Nation an apology over the Vote!!!! This is the least of it! If the PLP had any honour, the PM and the entire Cabinet should resign forthwith on the grounds of their rank incompetency.

Comrades some say the costs of the numbers "opinion poll" was $1.2 million and still others have put its total costs closer to the $3. 1 million mark? Regardless of the exact millions of taxpayers spent, has the Christie administration ever published an itemized breakdown of the where's and the who's monies went to?

Tal, no doubt this $1.2m figure doesn't take into account the loss of productivity suffered by the business community and the public sector on referendum day. The real cost will probably be closer to the $3.1m you mention.

The sane option is grow a set and shut them down, seize all the assets of those owning and running the number houses. That aught to blow your 12 million a year revenue out the door! Not like they're unknown or anything! You go directly to them for campaign financing every 5 years......
Next we'll have the drug traffickers seeking the same pathways to legitimacy. The Bahamas is so screwed, perhaps we can approach the Hague to recover all the money they've pilfered and stashed internationally since day one. TIEA's should help with that, recovering that would help with National debt levels.

Comrade The-Oracle love the ring to your 'pathway to legitimacy' but unlike some we been reading about (a job applicant) , before I does cut and paste, i'd like ask for your consent?

Man if you vote no to legalizing a criminal activity of course it means close em down. Why do you think perry said he'd close them down if the vote is no? DUH!!

Yeah.....let's just move on!!! A mistake was made having the referendum and good decision came out of it which is to legalize the industry!! Jobs kept.....not lost!

If you really believe they are doing this because they care about ten 4.50 per hour jobs for their campaign workers I have some land under the OLD bridge to sell you

Really??? At what cost? Been looking to buy a piece of property under there!

Which good decision? Do you mean the decision to run rough shod over our democracy? To spit in the face of Bahamians and say sorry?

The "referendum / opinion poll" was not a mistake, it was a set-up. Do they really expect us to believe that some of the supposedly top lawyers in the country couldn't see how this was going to play out?

Either they are stupid or they think we are.