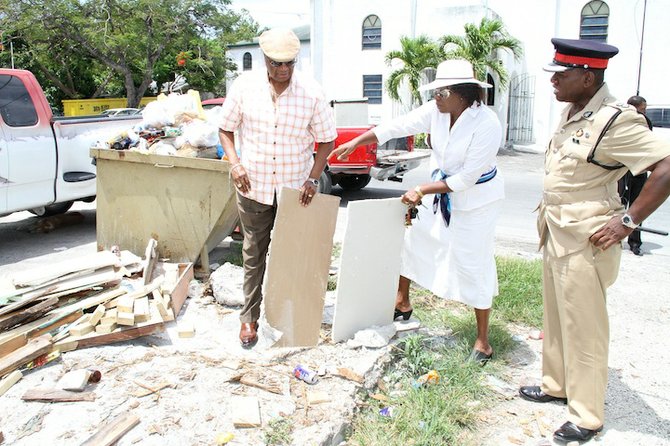 Urban Renewal is transforming lives in the Bahamas, free of political intervention, and is more than just a crime prevention tool. In a wide-ranging interview with The Tribune the organisation’s prime movers dismiss criticism of its operation, outline future goals and initiatives and pay tribute to their supporters and partners.

CO-CHAIRS of Urban Renewal, Cynthia “Mother” Pratt and Algernon Allen, have been responding to criticisms of the organisation and recently reiterated its vision at the Radio House studios of 100JAMZ, the ‘People’s Radio Station’.

“Mother” Pratt and Mr Allen, shared not only the focus of the social initiative but highlighted some of Urban Renewal’s goals, achievements and future plans.

“Some people have been asking what Urban Renewal is doing. What have we done?” asked Mother Pratt, the former Deputy Prime Minister. “We’re transforming lives. That’s what we are doing! We are making a difference in young people’s lives.”

“It’s about providing resources and opportunities to those less fortunate. We need to reach the children of this generation. To provide a path before they are taught by their older siblings to become criminals of the next generation,” she said forcefully.

As she nodded approval Mr Allen, the former FNM Cabinet minister, said: “Mother Pratt and I will not allow such a vital programme, like Urban Renewal, to be kicked around like some political football.”

“Urban Renewal does not compete with, nor tread on, the toes of government or any other party. It is a tool for social transformation,” explained Mr Allen. “In fact it complements and augments each government ministry, as well as other respective agencies.”

Urban Renewal has been touted primarily as an instrument for ‘crime prevention.’ “This is a great disservice and oversight,” Mr Allen complained. “It is an instrument of social transformation and in that process benefits all matters of anti-social activity. “Last Friday, thousands of children were provided books, materials, backpacks, uniforms so that they could be properly equipped for their back to school. Daphne Bannister deserves recognition for her invaluable assistance along with the kindness of Ron and Diane Cacatori and Rick and Rita Case from Florida. They enabled us to be in a position to help so many.

“Our friends from Florida have provided thousands of text books, teacher aids, filing cabinets, projectors and school furniture,” he said.

“My question,” asked Mother Pratt, “where on earth would these thousands of young children be without the programmes that we have already done? We have transformed thousands of lives.”

“We even had barbers, hair braiders and provided the children with simple lunch,” continued Mr Allen. “When the PM asked me to be co-Chairman with Mother Pratt in the aftermath of the 2012 election, I insisted on several things.”

“First, that Urban Renewal must not be driven by partisan politics. Second, that we cannot play ‘politics with poverty’ and as such Urban Renewal had the potential - if seen as an unbiased organisation - to be a powerful agent for social and economic change.

“Third, we had to have an independent body in the form of a foundation and a Board which could work alongside the foot soldiers finding ways to raise the funds, resources and establish the private sector partnerships which are so critical in order to make this programme a success. In this manner, we have the integrity, transparency and accountability that is needed.”

“I’m not sure many people know,” revealed Mother Pratt, “but Mrs (Eileen) Carron, The Tribune and 100JAMZ - through the kindness of their friends and partners - have been with me from the very beginning. That’s right! The Beginning!”

“We were doing urban renewal 20 years before Urban Renewal was even thought of,” she said proudly. “Together we have touched the lives of over 45,000 children; built 34 homes; provided computers; books; raised monies for a variety of PMH needs; provided assistance with parks; community centres, clothing and other needs. Together we’ve done things I never thought possible!

“Urban Renewal has touched the lives of schools, churches, clubs, communities, charities and countless others. I know Mrs Carron (doesn’t like publicity) but The Tribune/100JAMZ and Dupuch/Carron family have done so much for this country. It is sad that very few people know about it.

“Mrs Eileen Dupuch-Carron has never asked – as far as I am aware - in all these years whether anyone is PLP or FNM! We are all Bahamians. She is a Bahamian, a daughter of the our Bahamaland first and foremost!”

“Difference?! If Urban Renewal was not making a difference then Algernon and I would not be here,” she added. “We have 11 Urban Renewal centres in New Providence, nine in Freeport, two in Abaco, two in Cat Island, one North Andros, one opening in South Andros and one in Eleuthera.”

Mr Allen explained: “The centres have programmes focusing on youth activities; supervised homework; computers; education/learning, music, wholesome entertainment in a safe, secure environment in which our youth can have fun, socialise and learn.”

“Two years ago we started a band with 30 members,” Mr Allen said. “Today, thanks to the amazing generosity of a permanent resident who has adopted the Bahamas as their home, 450 musical instruments were donated to us. Today we have 1,000 members in the band,” a beaming Mr Allen revealed.

“Sociologists, educators and psychologists all agree I am told that music is a most transformational tool. Band have been a staple of youth development in the third world and developed world providing economic growth and team spirit. Music integrated with youth cannot be overly emphaised,” he continued.

“The Urban Renewal band is drawn from the lower socio-economic groups in the country,” Mother Pratt said. “When you see the children coming out of their homes with their uniforms and instruments the parents, neighbours - indeed everyone - can see the pride that they have.

“However, our success has left us in a dilemma,” she lamented. “We desperately need 600 more instruments!” with a big smile.

Mother Pratt revealed it was their intention to re-institute the Urban Renewal sports leagues for basketball, softball, track and field and boxing.

“Boxing! That’s right, boxing. Little boys seem to love to fight nowadays. Lets develop a sport that harnesses their energy, provides discipline and structure and teaches young men to have pride and to become leaders fighting for what is right,” she explained.

“Many of our less fortunate young men will never grace a classroom because they are being constantly suspended because they fight with one another. Boxing will champion this energy so that they can have a sense of pride in fighting. But fighting for their nation in our national teams.”

Mr Allen called it a “true blessing for me to meet, discover and have the privilege to know selfless, trailblazing women like Mother Pratt and Mrs Eileen Dupuch-Carron. Women who love, care for, inspire, provide opportunities for those less fortunate and can change the direction of nations.”

“They - and others - represent and espouse that which we call One Bahamas. They are an example and aspiration which I hope to emulate.”

Seriously. The only picture ya'll could find is them digging up in garbage? KML!!! Is that a metaphor? BOL!!

And everything Mother Pratt has said underlines that this is a duplication of the work of Social Services. It is good work, but good work executed inefficiently. Social Services should be getting the budget to hire people trained in this type of work. Real Urban renewal calls for economic investment in depressed areas, starting businesses and transforming the community that way. (It is not opening a new webshop in Bain Town that's a depressor, it's a silent tax on poor people.)

A powerful PR tool and means by which is reward your friends and punish your enemies! Mother Pratt claims no victimization in the program and I believe that she is honest in her duties but the truth is that from the outset the program was and remains political. Only PLP getting the spoils!