BOC recognises gymnasts who qualified for 2015 Pan Am Games 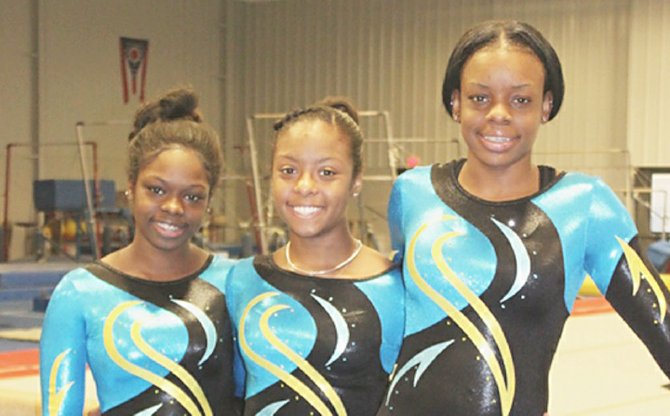 AS a team, Kianna Dean, Simone Hall and Joneka Johnson made history when they qualified the Bahamas in gymnastics for the 2015 Pan American Games to be held in Toronto, Canada, July 10-26.

On Tuesday, the Bahamas Olympic Committee recognised the competitors - two of whom were present along with their coach Trevor Ramsey and the Bahamas Gymnastics Federation, headed by president Barbara Thompson. Both Hall and Johnson were praised, while Dean was absent as she’s currently in school in the United States.

“This in itself is a great achievement for sports and the Bahamas on the whole,” said BOC president Wellington Miller. “On behalf of the Bahamas Olympic Committee and all our member groups, I would like to wish that you have a productive trip to Canada in 2015.”

Thompson noted that while the federation feels it is long overdue for them to achieve this milestone, they have still not decided on exactly who will represent the Bahamas next year, but she noted that all three competitors are eligible to compete.

“I have to say thanks to the Bahamas Olympic Committee for enabling the Bahamas Gymnastics to advance. It’s been a long road, but we have finally developed the programme where we have qualified gymnasts to compete in the Pan Am Games next year,” she said.

Thompson said they are so proud of the three level nine gymnasts who competed against a large field of competitors, most of whom were elite gymnasts, from 24 other countries to earn the Bahamas’ historic spot at the Senior Pan Am Championships August 25 to September 1 in Mississauga, Toronto, Canada. The only level that separates the two is level 10.

“We’re very grateful for the support of the Bahamas Olympic Committee and others,” Thompson said. “We would like to have more support, but we are making our mark and these young ladies are setting the example for the future gymnasts of the Bahamas.”

Next year, the Bahamas will be among the more than 20 countries that will compete at the Pan Am Games.

Ramsey, a long-time coach of the Nassau Nastics, said it was a long and tedious process to get the gymnasts prepared to compete at the championships and qualify for the games.

“Gymnastics has been going on in the island since the 1990s and we’ve had some tremendous struggles,” he said. “These girls have definitely achieved a milestone in accomplishing what they have accomplished at the Senior Pan Am Championships. I’m very proud of them and I hope to see more athletes follow them.”

With the Pan Am Games less than a year away, Ramsey said it will take another mammoth task to get the gymnasts prepared to compete. He noted that the Sr Pan Am Champs will only serve as a motivation for him and the gymnasts to get back into the gym and train even harder.

“We have a lot of work ahead of us going into the Pan Am Games,” he said. “These girls will definitely need the support of their family members, the community as a whole and their schools that they attend because they will need the time off to go to the meets to compete in leading up to the games.”

Hall, the 20-year-old student of the Bahamas Baptist Community College where she is studying bio-chemistry, said the experience she gained at the Sr Pan Am Championships was very overwhelming, but it will serve as a motivator for her to get ready for the Pan Am Games.

“I hope to be better prepared than I was,” said Hall who, if selected, will be looking forward to competing on all of the apparatus during the competition - uneven bars, balance beam, floor exercise and vault. “I’ve learned a lot and we have a lot to do and a long way to go to get to the Pan Am Games.”

And for 19-year-old Johnson, a tourism major at the College of the Bahamas, said it was good to have broken the ice at the championships because now she knows what she will have to do in order to get ready for the games.

“I just want to get better and be able to compete at a much higher level,” she said.