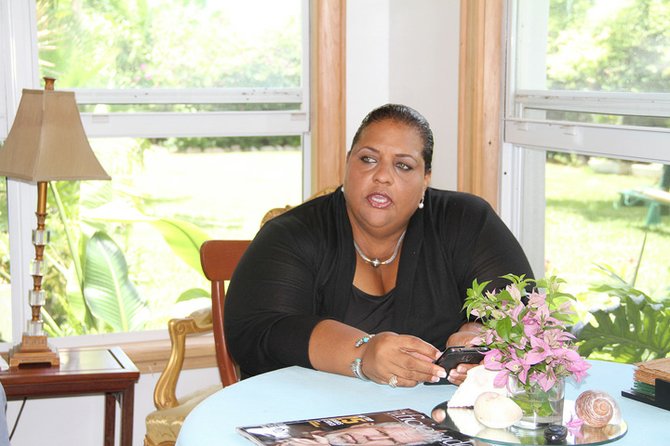 FNM DEPUTY Leader Loretta Butler-Turner said she feels “uneasy” and “violated” after one of her cars was stolen from her yard on Tuesday night.

Mrs Butler-Turner said she has been living off Shirley Street for more than 20 years and has never been a victim of crime before the car theft. Despite being shaken up, she said she is thankful that her teenage son, who was home at the time of the robbery, was unharmed.

“They came into our yard, which has security gates and is guarded by three dogs and stole my Mercedes Benz,” she told The Tribune. “My husband left the keys in the car because he, like me, felt the surroundings were safe. We went out in my husband’s truck and came back around midnight,” she said.

“We were suspicious when we met our gate open, then we noticed the car was missing and I started to panic because I knew my son was home. Thank God he was okay though. I have lived in this house for 25 years and never had anything like this happen. Never had a burglary, nothing, but I am grateful my son and my house are safe. I have never had a fear in my house, but this gives me a lot of thought.”

Luckily, Mrs Butler-Turner said her car was found around 8am yesterday in an area where people are known for “stripping” stolen cars.

“I met with the police and they were very effective, but they did not find the car. A friend of mine did and told me where the car was,” she said.

“I am advised that classic cars like mine are stolen for parts because they are more valuable than the newer ones and much more difficult to come by. The police have it now and are doing their investigations so hopefully they find who is responsible very soon.”

When asked if she thought the theft was related to death threats she said she received a few months ago, Mrs Butler-Turner said: “I honestly do not know at this moment.”

In June, Mrs Butler-Turner revealed that she had received a graphic death threat in March and then a phone call warning her to be careful.

Mrs Butler-Turner said she turned the letter over to the police in March, but felt the need to go public with the threat months later after receiving the warning phone call. In the threatening letter, Mrs Butler-Turner said the writer went into graphic detail of what was to happen to her in the moments leading up to her murder.

Oh my, if Comrade Husband intentionally left the keys Loretta's luxury Mercedes Benz in car she might have some explaining to do with her insurance company, before they will pay out the full value of a stolen car's claim. They could come back claiming irressonsibiity contributed to the car's theft?

Comrade husband? Omg, you're such an idiot.

And a "friend" knew where her stolen car could be found! The police need to interrogate her son!

No area in Nassau is safe enough to leave CAR KEYS in the damn ignition! These people on coke eh?

You lockin' your front door tonight??? The issue is 'not being stupid and lockin' up your valuables'.

My, my me Comrades tis' only the Tribune's latest breaking story taking place in all we Bahamaland is one including politics, crime and high celebrity. Talk about getting lil helping hand from ya Shirley and Deveaux Street friends at deflecting away from not inviting ya own red party's leader to your 'Abaco friends of Loretta get together?" Papa was invited but not Minnis and I'm guessing Comrade Brent? Finally, Papa may just have met he - what arrogance match?

Welcome to the world that regular Bahamians deal with every day.

Since Loretta has so many damn automobiles at her ready disposal, she could've loaned one them to her government car-less Her Majesty's Prime Minister contender Minnis, for his PM's police assigned driver to chauffeur him around Nassau Town? Minnis could have had a Benz just likes PM's?

Who leaves their keys in their car and just walks away in Nassau? Whether you drive a Pinto or a Benz, who does that?

Comrade Publius, Loretta driving a Pinto has be the most hilarious post ever posted on any blog page. Even Minnis and Papa Hubert would be laughing at such an imaginary thought.

I didnt say she drove such a car. The question was no matter what kind of car one drives, who in Nassau basically invites someone to steal their car by leaving one's keys in one's car

it is a small penis

When Brave Davis made light of the fact that he was a victim of crime, he was criticized. Now when Loretta Turner says how she feels as a victim, she is criticized. What do you all want?

Too bad BLT wasn't in the car when it was stolen!

Maybe, just maybe one of HER unintived guests arranged the removal of her car. If she ever drove it I'm sure the driver's seat needs to be fixed and the steering wheel has stretch marks on it.

Way to go madam deputy who wants to be head honcho.

Welcome to the real world woman!

Ever had the experience of getting up one morning and cannot find your keys? Then you go outside to check the car and after not finding them you return to the house only to see the keys hanging in the lock of your front door. You realize they were left there all night, then the thousands of things that could have happen thru the nite if someone found them,run through your mind. Now imagine how you must feel if you intentionally left your keys in your car and it (your car) is stolen...don't be no fool! It is a crime to do it in the US.

Nobody nowadays leaves keys in the car ignition. If i had a garage and i locked the door and the gate,i would still take my keys out of the car. Sometimes it would be understandable if you were to leave them in the car then dash inside for something,but to do so and then go out until midnight? What about the house keys,were they attached to the car keys? Maybe i don't get it because i am just an average Bahamian who doesn't fell that this wouldn't happen to me .

Sir Milo B. probably turning around in his grave...at his idiotic grand chirren!!!

Although Mrs. Butler-Turner may have left her keys in the car, who is to tell the key wasn't over the sun visor or in the arm rest. Point is like she stated her vehicle according to her was safe because her yard has a security gate and three dogs. In the view of an insurance claim, which I'm sure she has the least bit interest in, that's the only reason her actions is looked down for. Whether she had placed her key in the kitchen cupboard or under her pillow, wherever she left it in her gated yard, she felt was a suitable place. The focus here really should be on the person or persons who don't know what is there own to touch. I know how she feels cause the other day my house gas tank was stolen out the yard. No I don't have a gate, nor do I have dogs but to go outside and see that an individual has violated my private space like that was disturbing. Some people just don't have respect for others belongings, privacy or comfort. Now although Mrs. Butler-Turner may have recovered her car, she could ever leave home in comfort cause now she have to wonder what else these low life have entered her private property to remove or if some other bold person have now come to harm her and her family.

Look at the bright side of it Mrs. Butler-Turner. For someone to come in your yard, God knows what there intension was. Like you said, your son was home, so if they had came to break in your son may have gotten harm. Thank God the car distracted them and they just left with that. Don't question what happened, find good in whatever bad these evil people do.

I think she added "the keys were left in the car" just in case she knows the person who stole it and can say that "she forgot... they 'borrowed it'" so her friend doesn't go to jail.