The most beautiful place from space 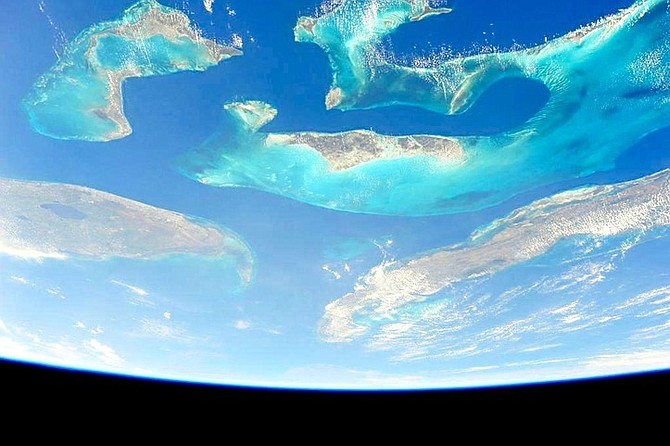 The picture tweeted by Scott Kelly.

The picture tweeted by Terry Wirts.

THE Bahamas is a global favourite for travellers – but now it has been given an out-of-this-world recommendation.

Earlier this year, NASA astronaut Scott Kelly started a year-long mission aboard the International Space Station, and on Sunday, he sent out a photograph of The Bahamas from space through his Twitter account.

He said in his tweet: “Had first video conference with my youngest daughter today. Showed her the most beautiful place from space. #Bahamas.”

Kelly is joined on the year-long mission by Russian cosmonaut Mikhail Korniyenko, with the goal being to better understand how the human body reacts to living in space – data which could ultimately help in plans for a future mission to Mars.

He is not the only astronaut to cast admiring glances at The Bahamas from orbit – fellow astronaut Terry Virts also tweeted out pictures of The Bahamas yesterday.

In his message, he wrote: “South #Florida, #Cuba, #Bahamas. From my view, the most beautiful and colorful waters and reefs in the world.”

Virts has been aboard the International Space Station since November, and is due to return next month.

Yes the "picture of the bahamas is beautiful"; though life here is nothing like the picture. Perhaps the rich can afford to cherry pick and enjoy the beauty, all the while being able to afford such insulation as to not experience the ugliness. For the rest of us, we much at minimum struggle to feed & shelter ourselves, while for the poor even the basics elude them. We watch our corrupt leaders steal away all the wealth of the nation, passing on benefits only to their crony capitalist pig friends. Rather than saying "let them eat cake", in the bahamas our leaders give us rotten milk, mouldy bread and unreliable government services. We're supposed to be one of the wealthiest nations in the regain; a skewed statistic that derives it's numbers by including the grand sums of money stolen by our "elitist thieves" into the nations income statistics; thankfully they do this, or we might be rivalling some of the poorest nations about now, statistically speaking that is. Of course for those Bahamians struggling, the majority, they don't believe the statistics. We're a nation who's people are so proud, we fail to acknowledge how poorly we're really doing by our own people.

What really p*sses me off, are the PLP apologists. When I travel to the Cayman Islands on business, I see what could have been. Caymanis have the same standard of living as Switzerland. Bahamians don't know how bad they really have it. The hope of a better tomorrow is beaten out of them by the grind of a substandard existence, and yet like loyalist zombies, they defend the PLP and its criminal government. It is like a mass retardation or brain washing.

We want better. We deserve better. We won't get better. The PLP cronies have stolen the beaches and hilltops from the Bahamians and have sold it to the highest bidders. Bahamians are expected to live out of sight of the beauty of our land.

The worst thing to happen to The Bahamas, is not Sir STAFFORD SANDS, it's the PLP. What disgrace these people are to this beautiful country!