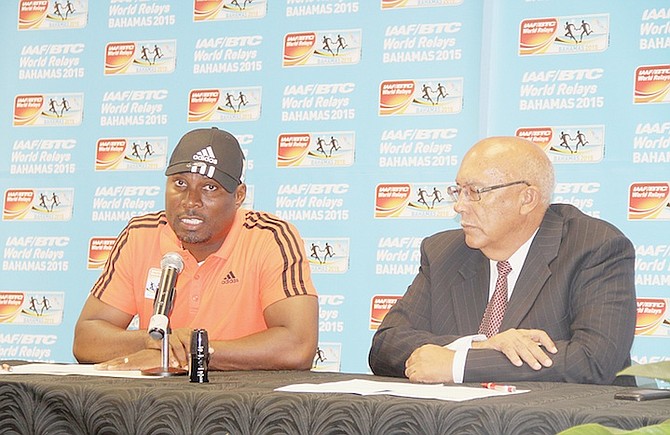 JUST in case anyone thinks they are going to come to the Thomas A Robinson National Stadium this weekend to capitalise on a marketing deal or to create havoc at the IAAF/BTC World Relays Bahamas 2015, they need to think again.

Drumeco Archer, legal advisor and James Carey, director of security for the Local Organising Committee, made it crystal clear that there are some stringent rules that will be adhered to as they addressed the media during a press conference yesterday.

Archer, an executive of the Bahamas Association of Athletic Associations, said they want the public to be aware of what they call “ambush marketing,” which consists of unauthorised marketing, promotional and public relations activities related directly or indirectly to the event or the organisation.

“These unauthorised activities give the impression that the event organiser has endorsed the relevant goods and services,” Archer said. “This is illegal. The general public is advised that in the following instances, ticket holders will be denied access into the stadium, if clothing that is passed off as the official brand of clothing gets into the stadium, for the purpose of ambush marketing, will be stopped.”

“The public is advised that following IAAF protocol, unauthorised vendors will be prohibited from conducting any commercial activity around the venue within the specified perimeter that would have been established by the police protocols and security,” Archer said.

“The event organisers reserve the rights to confiscate unauthorised paraphernalia and or commence legal action for any such infringements of its commercial rights. Such rights will be strictly enforced and with only a few days away, we wish that this event is as Bahamazing as it was in the first edition.”

As such, Carey said the RBPF has put together a comprehensive programme with its checks and balances to ensure that persons are properly screened. To that end, Carey advised the public to ensure that they give themselves ample time to get to the stadium before the event starts so that they can go through the process.

“Everybody entering the stadium will be screened and if necessary they will be searched,” Carey said. “In the High School Relays, some people objected to being searched, but that is a requirement of the IAAF, so that is an unavoidable exercise that we will be conducting.”

Security and police officers will be on hand at the entry points at the western entrance for the athletes, the eastern and southern for the spectators and the southwest for the VIPs.

“We must prevent the entry of offensive weapons, fireworks, videos and professional cameras with lenses that are longer than 6-8 inches,” Carey said. “We will be looking for drugs, we will be looking for laser lights. These items can have an impact on the games. They can be confusing to the athletes.”

Other items on the prohibited list are strollers for babies, umbrellas, pepper sprays, containers of any kind, backpacks, cans, water and food, which are for the safety of those spectators when they arrive. Once inside, Carey said there will be sufficient vendors with items such as food, water and drinks on sale.

However, small purses that can fit in the ladies’ laps, small cushions to sit on and medications that are necessary will be allowed in the stadium.

For those persons who wish to support their countries or favourite athletes, Carey said they will be allowed to display banners and signs, but not to the detriment of the spectators around them.

“The stadium is a no smoking zone. So if you’re going to bring in cigars, we will ask you to put them in your car,” Carey said. “The NSA and the IAAF reserve the rights to take anything that may be deemed inappropriate for this event.”

With 14,500 tickets already sold and an additional 2,500 seats inserted on the curve between the 200 and 100 metres at the northern end of the track, Carey said there will be a lot of people in the stadium and so they are advising women to avoid bringing their large handbags because it will be very congested and no place to store them.

“This is an event that has made television, so we have to create that atmosphere and that environment,” Carey said. “Let me point out that concession was made for cowbells and whistles because we want to capture that junkanoo spirit at the Bahamazing event.”

The National Sports Authority has made special arrangements for persons with disabilities on both the eastern and western segments of the stadium. So far, six persons have made requests. Once those persons arrive at the stadium, they will be escorted by volunteers to their designated areas.

Carey said they are expecting the spectators to cooperate as the police will enforce the rules and regulations.

For those persons wishing to bring their children along, there will be a free kiddies’ corner for those under 12 at the eastern grandstand that will be opened at 5pm.

Children will have access to bouncing castles and a few other fun rides. Some of the elite athletes have been invited to stop in and take photos with the children.

No ambush marketing or creative ideas.

ALL KICK BACKS COME TO US!