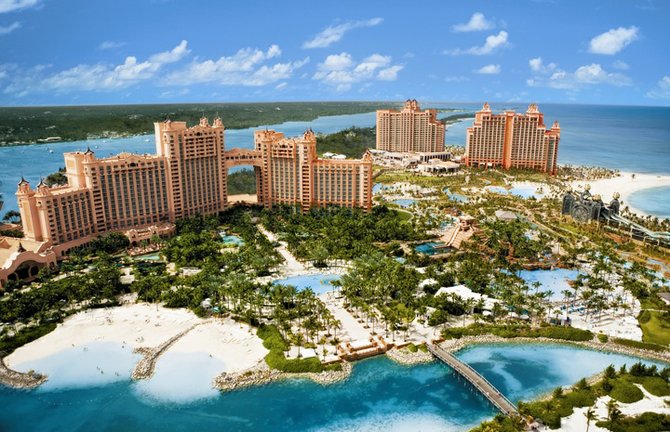 LABOUR Minister Shane Gibson yesterday said suggestions that the new national minimum wage could have a negative effect on the Atlantis resort’s ability to maintain its workforce were “unfortunate”.

Yesterday, The Tribune reported that there is some suggestion that the leading resort on Paradise Island might consider job reductions in the wake of a 40 per cent hike in the minimum wage.

A senior source told The Tribune that the new $210 wage rate for the private sector was not being “favourably received” due to its effect on the company’s profitability and capacity to compete.

Mr Gibson said despite being “concerned” about the report, he nor the government can tell a company how to run its business.

However, he said he remains hopeful that the Atlantis resort can make “certain adjustments” to prevent lay-offs at the Paradise Island property.

“Back in 2002, when minimum wage (was first introduced), if you look at the rates back then and what they charge now, they (Atlantis) made certain adjustments,” said Mr Gibson.

He added that the National Tripartite Council, which presented a figure for a minimum wage increase to the government earlier this year, had a representative from the private sector.

“The Chamber of Commerce, who represented the employers at the negotiation table, took their concerns into consideration and still agreed that this was the right way to go,” he said.

The new national minimum wage took effect on Saturday and brought private sector minimum wage in line with that of the public sector.

Earlier this week, the hotel source said “adjustments” would have to be made at Atlantis in light of the wage increase. When asked if this included potential job losses, the source said it is a possibility.

“You can be assured that we will not continue to bear these costs. We will make adjustments where we have to,” the source, who did not want to be identified, stated.

“There was no conciliation with respect to the minimum wage increase. You would think that tipped positions would have been excluded from this newest tax on businesses.

“How does someone making $40,000 a year fall into the minimum wage employee category when there are mandatory gratuities attached?”

The source explained that while the resort can pass expenses related to value added tax (VAT) to customers, it was in no position to do so with every other cost thrown at it and stay competitive.

“This is just crazy mathematics,” the source said. “We will take whatever measures are necessary to sustain our business, however painful those measures may be.”

Mr Gibson last month dismissed concerns that an increase in the minimum wage will lead to higher levels of unemployment.

You know what's so weird? He calls this "unfortunate", but he should have used another adjective.... "FORESEEABLE". I really wish these people would stop pulling decisions out of their butts and put persons in place with vision who can have the ability to see long term consequences and have plans in place if the worst happens,. I am simply sick and tired of our BLINDsided members of cabinet

None of the above scandals I won't play forget will be highlighted with any ear shot come election fever,sick of these worthless politicians.

The thing is Guy, if they could get away with not paying at all they would. Organizations (including the Bahamian Gov't) work for the main objective of generating profit. So workforce reductions not because it can't be afforded, but that it would cut into the profit of those at the top.

More poor people, more people willing to do crap jobs for next to nothing. The grand scheme is as long as Bahamians can't help themselves, they will always be disenfranchised because that's what makes this country profitable for investors and gov't alike

Shame on Atlantis,, All they care about is their profitability, I can understand why the source does not want to be identified, they should hang their head in shame. Atlantis has and will hire only the persons they need to work. So the Source will do well to explain what they mean by job loss. They do not hire people because they love them far from it. They hire people because they need them to work.

Interesting to note that the 40% increase applies to the the private sector only, NOT THE GOVERNMENT, and by the way Birdie the private sector is engaged in business to make a profit not to operate at a loss simply to keep union leaches or non productive employees on the payroll. The private sector doesn't have the luxury of the Treasury as a safety net, nor can they increase prices like the government increases taxes. You have obviously never run a business as you clearly know nothing of the overheads businesses in this country have to contend with.

While I agree about it only applying to the private sector, the governments lowest wage is apparently right around the $210. Gibson is claiming that the new minimum wage will bring it in line with the government's pay scale. How true that is, I don't know.

The young you lady working at Burger King will only take home $210 minus National Insurance deduction deserves the raise, the young lady working at Atlantis will take home $800 per week, with gratuties, every week. A friend's daughter has been working for over two years since her accounting degree,where her parents are $180,000 poorer and she doesn't make that much.

Shane Gibson pandered to the unions by increasing minimum wage by 40%. Did this government throw out any lifeline to the hundreds of Bahamian businesses that are suffering and closing down like the plague? Come visit Freeport/Grand Bahama or visit some of the Southern islands if you think Nassau is in bad shape. When a new worker enters the job market and he is out there pounding the pavement day after day, looking for a job, he would prefer to find something that can at least sustain him until he finds something better, than to go two, three years and not find anything. Despite the recession, the cost of living in the Bahamas has gone up 20-30 percent. Some food stores and other businesses adjusted their prices for the anticipation of the minimum wage increase when they adjusted for VAT in December-January so they had several months windfall. Why is gas at the pumps and electricity still almost at an all time high in the Bahamas when these commodities have dropped 40-50% around the world?

Talked to a minimum wage worker at island luck, they said the raise only brings them an added ten dollars after everything and they're trying to figure out affording VAT increased to 15%.

Well imagine if these retards bring NHI in January! That will mean an additional 6% in costs to Employers in a matter of months (40% increase in minimum wage, 10% increase in national insurance and 6 % in NHI, not to mention the costs in the implementation of VAT and the costs of accounting for it. So when you see a corresponding 50% increase in the costs of goods and services and/or a significant decrease in employment and a substantial increase in the number of businesses closing then you know because I told you so.

Ok so prices may not increase by 50%. But they will go up between 15 and 35 % based on what percentage labor costs is of gross sales/turnover.