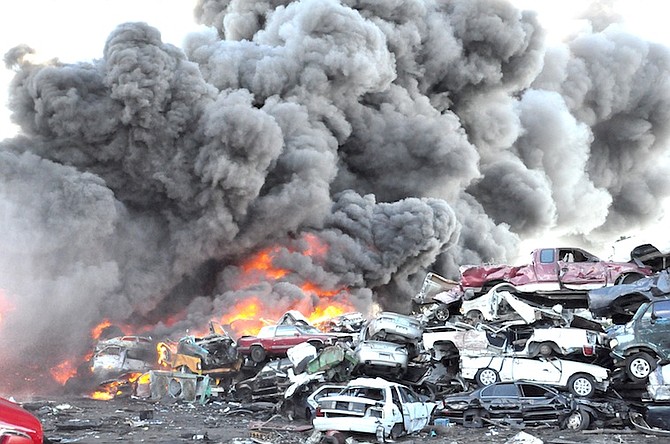 A MASSIVE junkyard fire in Grand Bahama has raised concerns for better supervision and monitoring of auto salvage and scrapyards in the commercial industrial area on Queen’s Highway.

On Monday, it took police firefighters – assisted by fire personnel from the container port and airport – several hours into the evening to contain the blaze. The fire was still smouldering yesterday, a senior fire official reported.

Police Fire Chief Ernest Hanna told The Tribune that there had been a previous fire at the junkyard at the rear of Kent Motors.


“The fire is not extinguished yet; it is in the smouldering stage because of the amount of scrap metal, other debris and old cars there,” he said.

“It is not an easy process to extinguish a fire like that so we isolate the burning area so it would eventually burn itself out, without causing a nuisance to other adjacent businesses.”

Around 3.25pm on Monday, the Police Fire Department received a call about a large rubbish fire at the junkyard.

Thick, black smoke billowed into the sky and could be seen for miles. Four units responded, as well as fire services personnel from the container port and airport. As a safety precaution, a portion of the highway was closed and traffic was re-routed for commuters.

An official from the Department of Environmental Health was also at the scene.

The blaze was brought under control a few hours into the evening, Mr Hanna said.

The fire and smoke threatened adjacent businesses in the area, including KSR Rent A Car and Wide World Travel.

According to KSR owner Shawn Graham, the flames came close to his business and engulfed the entire back fencing on his property. In addition to fire and smoke, he reported there were also several explosions.

“All the cars were blowing up in the back there and the flames were all along the fence on the backline of my property from one side to the next,” he said.

According to Mr Graham, some time ago, the junkyard owner had cleaned up the yard, creating a big mound of debris on the site.

“Sometimes they would take a little piece of debris and start a little fire to burn the debris instead of calling a dump truck, and I have lodged complaints about it to authorities saying that it will cause a big fire,” he claimed.

Mr Hanna, who was transferred to Grand Bahama in December, said he is not aware of any complaints made to Fire Services concerning onsite burning at the scrapyard. Starting fires are illegal and persons could be prosecuted, he said.

When asked the cause of Monday’s fire, Mr Hanna said that information they received suggests that there might have been a bush fire nearby that spread to the junkyard.

“That is the information we are receiving now, but we were not able to determine as yet how that fire may have started,” he said.

Mr Hanna said that no one had called about a bush fire in the area on Monday.

“A place like that we will have to pay attention to and it is our intention to speak to the owner because, at a junkyard, a fire could be ignited by many different things.

“You have heavy machinery and the friction of metals and then residue of gasoline and other chemical inter-mixing, and on a hot day you could have a spontaneous combustion,” said the fire official.

“Our intention is to see how we can as much as possible fireproof his property, and how to store the vehicles much better so that in the event of a fire we would be able to manage it without causing stress to people and adjacent businesses to his property.”

Mr Graham was concerned about the lack of water hydrants in the area. He said that the only nearby hydrant was at Dolly Madison and that the fire truck had to leave the scene.

“All of the businesses here pay port fees to the Grand Bahama Port Authority, which should ensure that there are water hydrants in the area,” he said.

"Mr Hanna, who was transferred to Grand Bahama in December, said he is not aware of any complaints made to Fire Services concerning onsite burning at the scrapyard." Fire? What Fire? I een smell no fire!! So Typical! they've been burning the plastic off of wire there for ages. Do they remove fuel and oil from junk cars? Doubtful. Do they store waste oil and gas properly? Doubtful. Is it a toxic waste site? Absolutely. Can you say "politically connected"? The Port is, as always, oblivious.