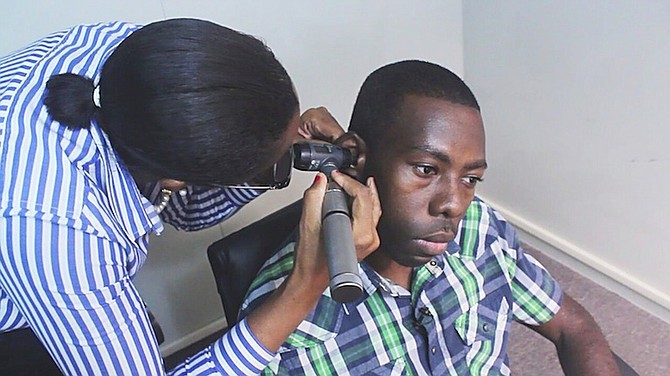 Three years ago, Wesley Paul suddenly went deaf. He had just no residual hearing in his left ear and minimal hearing in his right, and he was no longer able to communicate, continue to work in the financial sector or participate in one of his favourite hobbies – singing.

While it remains unclear what led to his hearing loss, Wesley recalls having an earache in August 2012. He took over-the-counter medication and never got medical attention, instead he compensated for the deficiency by relying on his left ear for listening and receiving information.

Early in 2013, he subsequently lost his hearing in his left ear. He was sitting in the movies one night and heard a sound he describes as ‘fire crackers’ and then suddenly was thrust into a world of silence. He did not know how to sign, lip-read or communicate by any means. This changed his life drastically – he lost his job and could no longer communicate verbally or socialise with family and friends. He found himself retreating more into this world of silence to a point where he felt a profound sense of hopelessness and felt at times there was no reason to live.

The 33-year-old was fitted with a hearing aid, but struggled to communicate. Losing hope at ever regaining the life he once enjoyed, Wesley had what would turn out to be a life-changing meeting with local audiologist Dr Kim Scriven.

She had recently partnered with the Med-EL company out of Austria – one of the world’s leading manufacturers of implantable hearing devices – to open one of their hearLIFE Clinics at Bahamas Medical Centre, offering several types of hearing implant surgeries including cochlear implantation at Doctors Hospital.

Wesley was deemed an ideal candidate, and on July 4, 2015 underwent the first cochlear implant surgery to be performed in the Bahamas at Doctors Hospital. His surgery was deemed a success.

“Wesley was selected because he met all medical and audiological criteria, had very good post-linguistic skills, was highly motivated with the drive and determination to regain some normalcy and improved quality of life, and the fact that he had only lost his hearing a few years ago,” Dr Scriven explained.

A cochlear implant system helps to restore the sense of hearing for people with severe-to-profound sensorineural hearing loss. For children and adults with this type of hearing loss, hearing aids provide little or no benefit.

A cochleari is the only medical device capable of replacing one of the senses. It works by bypassing non-functioning parts of the inner ear and providing electrical stimulation directly to nerve fibres in the cochlea. A cochlear implant system consists of two parts: an externally worn audio processor, which sits comfortably behind or off the ear, and an internal cochlear implant, which is surgically placed just under the skin.

Dr McKinnon, who practices and teaches in Tennessee, grew up in a hearing impaired family and knows firsthand the challenges profound hearing loss can pose to the individual as well as his or her family. Cochlear implant surgery, he explained, restores quality of life and function that benefits the patient, the family and the society.

“This technology takes one of the most daunting problems – an inner ear that no longer works – and helps us give a very effective solution for that, whether you’re a child or an adult.

Paediatric implants have done wonders for deaf children because they now can achieve similar education and employment opportunities as a normal hearing peer when they are implanted in the first nine to 12 months of life,” he said.

Wesley’s implant was activated a month after the surgery and since then he has been undergoing rigorous therapy with Dr Scriven and speech language pathologist Sharon Clarke to learn how to communicate and adapt to life using a cochlear implant.

“It has only been one month since the activation, but Wesley has done remarkably well. Not only is he able to hear sounds around him, but on the objective tests he also did very well, scoring almost 80 per cent on the speech test in quiet without any visual cues,” said Dr Scriven.

“His conversational skills are impressive as he now seldom requires repetition by the listener and doesn’t rely on lip-reading as often. Results of standardised testing also validate the progress he is making as he is now able to correctly respond to questions with little cueing and repetition. He is also beginning to watch television and listen to music again, which he loves.”

Most adult post-lingual cochlear implant recipients like Wesley will undergo up to a year of therapy in order to regain the highest possible level of hearing function.

For Dr Scriven, who sees first-hand the struggles so many patients experience due to profound hearing loss, the ability to provide cochlear implant Surgery at Doctors Hospital is significant.

“For the country, it further validates our position in the rest of the world as that ‘little dot’ of a country on the map that is able to provide medical treatment and services at a very high and professional level, but in the kind of environment that only adds to the individual’s healing process. For this reason, too, it will also add to our medical tourism value, persons would be more inclined to the Bahamas for standardized medical care in a tried and proven destination, known for treating the customer right,” she said.

“Thanks to Barry Rassin, Charles Sealy, Cheryl Seymour and the rest of the team at Doctors Hospital, Dr Robert Ramsing and Dr Sy Pierre, the entire team from Med-El in Austria, the staff of hearLIFE Clinic Nassau and all those who partnered with us to make this first time venture the success it was. This collaborative effort and its subsequent results speak volumes about the positive things that can be achieved when everyone works together with the same vision and purpose,” she added.

To learn more about cochlear implants at the hearLIFE Clinic at Bahamas Medical Center, contact 242-698-1145 or visit www.hearlifeclinic.com/bs or www.bahamasmedicalcenter.com.