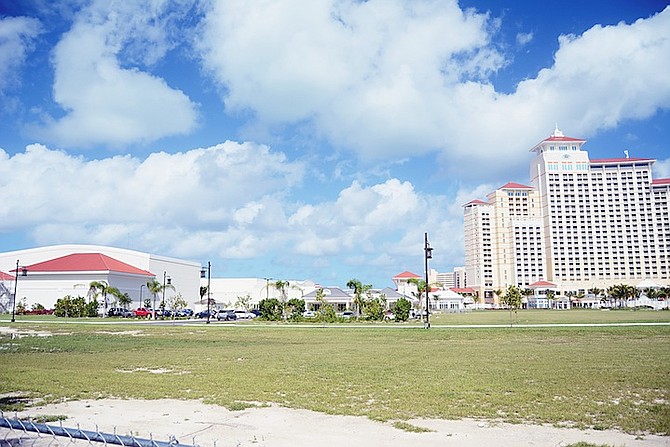 PRIME Minister Perry Christie said he expects Baha Mar to be completed early next year, although he did not give a specific date for the restart of construction at the resort or when the property might open.

“About two days ago I wrote a very strong letter to the president of the China Export Import Bank setting out the fact that a very significant number of world-class operators have gotten involved and made applications for the property to assist to put money into the property to bring it to a conclusion and an opening,” he said. “These are big American companies. We have seen some of China’s biggest companies themselves and they have indicated a preparedness to buy in to the development.”

Reiterating comments he told the press weeks ago, he said: “So for the Bahamas we have a situation where the construction company has taken the position that it does not want to start construction without paying their subcontractors and that includes the Bahamian subcontractors. And I’ve argued that I’m not prepared to accept that those contractors will be paid less than a dollar for a dollar for the work performed. So I’m anticipating that 2016, very early in 2016 that we’re going to have a major move for Baha Mar.

“Already we have a commitment to finish the convention centre to ensure that the Inter-American Development Bank (IDB) conference that will be held here in March will be ready together with the Melia facilities so therefore I’m content with the fact that the receivers and the bank have agreed for a partial mobilisation of construction and that in itself will suggest to me that once they partially mobilise, they will expand themselves to completing it early in the New Year and so again, you’ll hear more about it as we progressed into the year.”

Despite his statements, Mr Christie suffers a credibility problem with some Bahamians, having said numerous times over the last year that the conflict at Baha Mar was close to being resolved.

Getting Baha Mar open has particular importance following last week’s announcement from the Department of Statistics that unemployment in the country had risen 2.8 per cent to 14.8 per cent.

Last week, the Free National Movement (FNM) released a statement saying Bahamians will have a “bleak Christmas” because Mr Christie “sells fantasies and promise of relief on the horizon.”

Baha Mar filed for bankruptcy on June 29 in the United States, however the cases for the resort’s Bahamian companies were later thrown out of court.

In October, the Supreme Court approved the EXIM Bank’s request to have the property placed into receivership.

this is laughable - when is he going to realize that no one is taking him seriously anymore?

There's a reason they call him "the emperor", you know. He personifies the emperor in THE EMPEROR'S NEW CLOTHES.

If the Prime Minister is once again predicting good news, this could be the end of Baha Mar altogether. He must be either smoking some good $***, or off his medications. Every one of his past predictions of a positive development has led to another setback.

This man really must think Bahamians are stupid.

bey all of them seem to think so! it does get me vex when they talk bald-faced non-sense

It may not happen, but PGC is right nevertheless. Never second guess the Great Leader.

Comrade Perry Christie: Prime Minister picks up: "2015's Most Prolific Letter Writer Award” again begging Chinese Bankers to please in sweet name Jesus - restart Cable Beach's Baha Mar – if only in-time to its reduced on world tourism stage billing recognition as The Convention Center of Caribbean’s Rivera.
Is the PLP’s planned 2016 Party’s Convention to be paid out PLP’s treasury, or considered as donated facilities to the PLP’s political 2016 General’s cause?
No better said than I leave the last words to the late Androsian Clarence A. Bain's ghost reflect on after his early morning walk along Cable Beach... "Great God Almighty, what manner $3.5 Billion extravagance thing is this I sees and still my PLP Cabinet Colleagues - leaves it all sittin there to sea salt decay whilst padlocked-up tight."
Oh boy, Clarence wait til your ghost does motor boats by that "God Almighty even more extravagance of izmirlian's 'Dock'.
Comrade Banker and I be sitting right there at docks end as you boats on by.

The Bahamian people are tired of you Mr. Perry....you sir are a disgrace. Can't believe nothing you say at this point.first things first get the hell out of parliament.you and your bunch of thieves for a cabinet......no shame.

The facts are Perry Chrisrie single handedly caused the protracted delay (and possible demise) of Bah Mar. When Izmiriland realized that China Construction America was dragging its two feet and not trying to complete Bah Mar in a timely manner and also that it was doing shoddy work it asked that CCA be fired from the project. After China Exim bank refused this request, Bah Mar had reason to believe that the Chinese (bank and construction company) were in cohoots with each other. So it (Bah Mar). sought to protect itself by filing for bankruptcy. Perry Christie flew his team of misinformed "negotiators" to China more than once to meet with the Chinese, even in the absence of Bah Mar reps. And now months later, the Bah Mar projects sits whistling in the wind. Unfinished and unoccupied. A white elephant to some, a black eye to many. Now China ExIm bank is saying it no longer wants China Construction (America) on the project. Wasn't this the point of contention in the first place? And while China ExIm bank and the Christie government may have severely disenfranchised Bah Mar by failing to fire CCA, the bank is trying to get full value on the sale of Bah Mar. Shouldn't they be trying to make amends with Bah Mar to lessen the penalties when they a$$ get sued by Bsh Mar?

Guess what there are over 100 entrants for the havana yacht race in February and more expected.by the time these idiots figure it out, if at all, those of us will be watching the floor show at the tropicana and sipping mojitos. anyone that believes that it will matter at all, is crazier than the emperor. cuba baby 2016. !! by the way you best start learning mandarin.

Christie's new Chinese friends have given him the proverbial shafting where it hurts most and he can't even feel it! He must be sitting on a very big soft cushion of cash and other assets in order not to feel the political pain associated with the royal shafting that has been given to him by his new Chinese friends.

This is a country trying to steal the whole project, not a company within the country. They could care less if the Baha Mar fills up with amazing conventions, rich gamblers as the Riviera of the Caribbean.

The Chinese Construction Company of Americas put two provisions in the Chinese Exim bank contract to cough up the money; All Chinese workers; and the construction company could not be fired, even if they were late (more than a year) and did shoddy work.

I have no idea of the financial arrangements with the PM, but it seems reasonable that a country likes dealing with the leader of another country. Since the Bahamas seems to be standing solidly behind helping the Chinese government steal the share of the project they do not own, they have chosen sides.

Other Caribbean countries pay attention! If that hotel does not open on time neither you nor your citizens will benefit. You may want to get some guarantees of your own that if the government-supplied companies can't do the job from the other side of the planet, you have the right to take over. It may be their cash and their workers, but it is your land, sunshine and surf!

Enough with the nonsense and false, unsubstantiated statements. The PM is the consummate example of the phrase that no publicity is bad publicity. I think he is such a narcissist that he feels he just has to be a part of the conversation. A PM’s job is not just to be heard, but to provide value, he does none and just keeps faking false reports and alleged insight as to his knowledge of the status of this project. It’s like he’d rather say something wrong and with no fact to act like he’s in the know and spread gossip before he gets the truth….then say anything at all. Somebody please call this man out……..maybe a reporter, go back and do a study/research every time he has made a similar statement on “Having it on good authority”, “This is when we expect”, I know there is an “eminent announcement”, “In the short term” “very soon” (I don’t think he knows the meaning of these last two timeframes…) and then please publish this number, I think people will be surprised (or not) in the number and perhaps he may actually see this report and decide to shut up once and for all until somebody with the authority to speak directly to an announcement and date is the once to share the info.