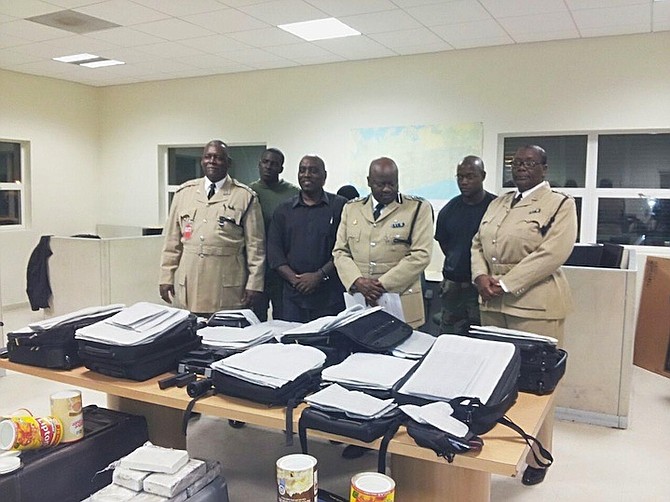 Grand Bahama Police seized $620,000-worth of suspected cocaine at a residence in the Lucaya area on Monday night. Three men were taken into custody in connection with the drug seizure, police reported.

Senior Assistant Commissioner of Police Emrick Seymour reported that DEU officers executed a search warrant at a residence, where they discovered seven kilos of cocaine in a room.

He said during a further search, officers found cocaine hidden in the lining of 15 black travel bags, including backpacks and camera bags.

A 9mm Glock pistol was also recovered from a closet in a room, and 22 .40 rounds of ammunition were also discovered hidden in the ceiling.

Mr Seymour said that officers seized a total of 48 pounds of cocaine. The occupants of the residence – three men of Grand Bahama ages 30 to 40 years - were arrested.

Police believe the drugs were going to be smuggled out of the country. Mr Seymour said the discovery is evidence of the extent that criminals will take to conceal illegal drugs. He also showed reporters Lipton ice tea containers, where some of the drugs were also hidden.

“The discovery shows the innovation of the criminals; they are using all means to advance their nefarious acts,” he said.

He applauded the officers for the significant discovery.