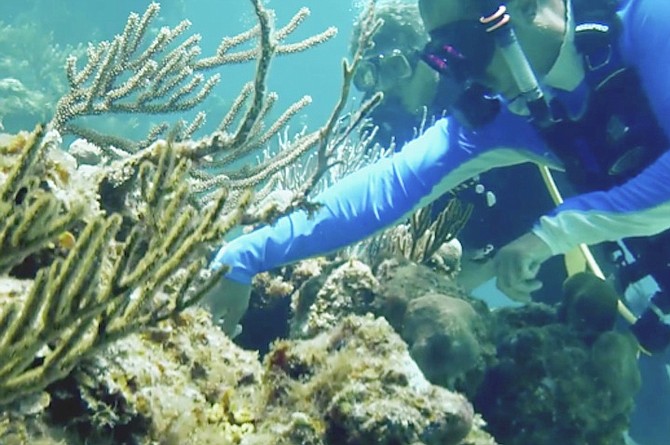 THE once pristine reef system surrounding the tiny island of Guana Cay in the Abacos has suffered extensive damage since construction of the controversial Baker’s Bay development, environmentalists claim.

The Save Guana Cay Reef Association (SGCRA), which mounted a five-year legal campaign in opposition to the project, warned of serious implications for the reef – recognised as one of the best dive sites in the world – and the rest of the previously unspoiled island.

“They burned the entire forest, they tore down the mangroves, they dug it all up. They’ve got a golf course and the chemicals are seeping into the reefs that are there. It is environmental rape and pillage.”

Mr Smith fought alongside the SCGRA from 2004 to 2009 for the rights of Guana Cay residents. During a recent visit to the island, he dived on the reefs with association president Troy Albury to examine the extent of the damage.

Mr Albury explained that nutrients applied to maintain the condition of the golf course drain into the surrounding water and lead to accelerated algae growth.

“Algae is always in competition for turf area on the reef. When you have algae growing, coral cannot grow and even when there is coral growing and existing, the algae gets close to it and starts to destroy it.”

While the situation is dire, Mr Smith said it was not past the point of no return. “This used to be one of the most beautiful dive spots in the world, and it still has the potential to be if they would stop destroying it with all the chemicals,” he said.

Mr Smith cited Guana Cay as a perfect example of the destructive power of the “Anchor Project” theory of national development, which ruins traditional communities, often without living up to the promises made by the developers and the local politicians who facilitate the deals.

Mr Albury said the once idyllic community has been severely affected by the location of a large-scale resort on the island. “We have traffic now, we have crime, we have car accidents. We actually now have a policeman on the island, because we are having problems with people breaking into houses. Before, you knew everybody,” he said.

The SGCRA president said the community has been waiting “for a long time” for Baker’s Bay to fulfil its obligations under the heads of agreement that allowed the project to go ahead. These included building a community centre, reserving the water sports business exclusively for Bahamians, creating a beach park, building a solid waste facility for the whole island and providing housing for police officers.

“In addition to that, there were also promises of environmental monitoring, and none of that ever came into play,” he said.