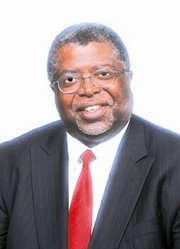 OUTGOING Chief Justice Sir Michael Barnett said the criticism levelled at the judiciary over the grant of bail is “at times discouraging” as he urged critics to take stock of the facts over the issue.

His advice was geared towards critics who attribute the court’s discretion to grant bail to persons accused of serious offences as the reason for escalating crime. He added that it is “unfair” to blame the country’s crime woes solely on “flaws” in the legal system.

His remarks came during a ceremony to mark the opening of the new Legal Year and a month after Attorney General Allyson Maynard-Gibson expressed hope that the judiciary “will do everything to prevent what appears to be judge shopping” over bail.

Late last year, Police Commissioner Ellison Greenslade expressed concern about bail, highlighting a case where bail was granted to a “prolific offender” nearly a month after another judge rejected his request.

“We (judges) work in challenging conditions and have often been the subject of unfair criticism but our work is transparent,” said Sir Michael.

“By law, our proceedings are for the most part public proceedings and our decisions and reasons are matter of public record.

“I note it is at times discouraging to hear criticisms (of) our decisions when those criticising us have not informed themselves of the reasons for our decisions and the evidence and the circumstances that are presented to us.

“I urge those criticising justices, particularly for the exercise of our discretion to grant bail, to familiarise themselves with the record of the proceedings before engaging in any public discourse.”

He said that the court was not immune or asking to be immune of criticism, adding: “We ask that such criticism is only made when persons have properly informed themselves of the facts.”

In the summer of 2014, the Christie administration outlined restrictions in a bill to amend the Bail Act that sought to lessen the number of violent offenders who receive bail.

Under the former Bail Act, people charged with such major crimes as murder, armed robbery, rape, possession of automatic weapons, possession of a firearm with intent and kidnapping are prohibited from receiving bail except when the court believes such people have not been tried – or are unlikely to be tried – within a reasonable time, so long as certain conditions are met.

Under the amended Bail Act, applicants, as opposed to the prosecution, will have the onus of proving that they should be granted bail. The court will be forced to consider the safety of the victims of their crimes when deciding whether to grant bail.

In response to the passing of the amended legislation in September 2014, lawyer Wayne Munroe said the government should focus on promptly trying accused criminals to keep them off the street instead of the “unnecessary” new bail restrictions.

Yesterday, Sir Michael noted that while the additional courts will “have a positive effect, we must not be under the illusion that this is the solution to the vexing problem of crime.”

“This society must find a way to address the problem of dysfunctional families, witness intimidation, persons seeking to avoid jury duty, for a prison system that pardons some criminals and for an unforgiving society that is not willing to give persons who have spent time in prison a second chance.”

“These are all matters outside the control of the justice system. And so it is with respect, unfair and in my view misleading, to blame the flaws of the judicial system as the cause for the increase in crime.”

This society must find a way to address the problem of dysfunctional families, witness intimidation, persons seeking to avoid jury duty, for a prison system that pardons some criminals and for an unforgiving society that is not willing to give persons who have spent time in prison a second chance I think the learned judge is admitting that the judicial system, in particular, and society, in a broader sense is broken and needs fixing. Since judges sit at the top of the judicial system (or at least so it is perceived ) then it is not unfair to levy criticism at them if justice is not appearing to be done. The judiciary must have their independence from other segments of the government so it is he who sits at the top of this section who must know what needs to be done to fix the system and make it effective and iniate efforts to ensure that actions are taken to make the judicial system wholesome and effective. Witness tampering, jury avoidance, and a firmer discretion on the granting of bail are all areas where a judge can have an input. If society feels that crime is going unpunished or punishment is not harsh enough or punishment is not swift enough, then the erosion of values will continue and so will crime continue to increase. When only 5% of the persons who commit murder and when 60% of those who are charged with murder eventually get bail, that does not reflect an effective legal system.

It is common knowledge that the state and general condition of the court's records is far from satisfactory. Michael must therefore have had his tongue in his cheek when he said: “I urge those criticising justices, particularly for the exercise of our discretion to grant bail, to familiarise themselves with the record of the proceedings before engaging in any public discourse.”

He has his chance and failed to show any improvement within the judicial system which is a total mess here, more than that , a disgrace.

I had my turn, got my knighthood, couldn't change anything, and now can look forward to a huge pension.

As she can already look forward to a huge pension, perhaps that's why Alison doesn't want the job.........comes with way to much headache never mind the criticism.

On the international stage our judiciary is a joke. That is why Cayman, Bermuda and even the BVI get all the business.

Go to any of the Financial Seminars and you hear that The Bahamas courts are very slow and that they cannot recommend The Bahamas as a viable jurisdiction. That is a contributing factor to the fall of our financial sector, the one sector with good paying jobs.

This man has done nothing....lazy. He is a disgrace.

The CJ is a pawn of the government .......... appointed by the PM. Please explain how he can do his job without tenure and without political interference??????? Just like the COP