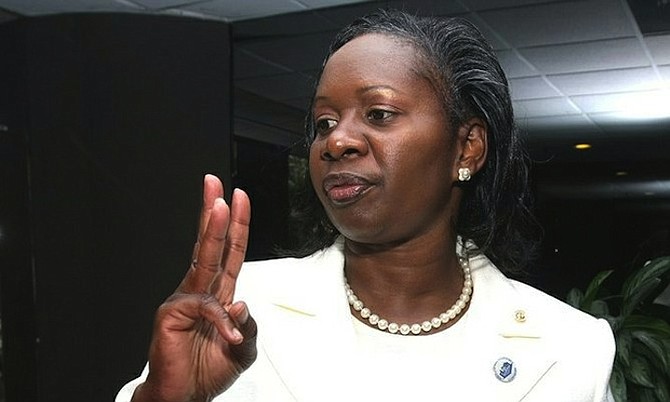 BAHAMAS Union of Teachers President Belinda Wilson said today she has been approached by a political party to run in the next election and despite making "no commitments" she can "never say never".

On a local talk show Mrs Wilson said the BUT and its members are her first priority at this time but if she decided to enter politics, the decision will be hers and hers alone.

She also stressed that she currently has no allegiance to any of the three major parties.

"So I have not been involved politically involved in 14 years. I have been approached but at this time I have aspirations and I have made no commitments. I note that you never say never but that consideration will be left to me and me alone if I chose to do so.

"At present I must say to you that my priority is the BUT and I intend to use it and the passion and knowledge I have to ensure the BUT gets the best agreement right now and I am able to carry out the mandate the members have given to me as leader of the union."

Mrs Wilson also stressed that she intends to move the union past "the latest internal drama", adding it is "up to the Executive Committee to decide whether they are willing to work with her".

"I am willing to healing the wounds, I can say that I am truly amazed with what God has done with me," she said. "I hold no animosity and I am prepared to work forward and work with each individual. But they must in their own heart decide whether 'I can work with Belinda for the betterment of the union'. But Belinda Wilson is here for this season and I intend to carry out the will of the people and the will of God in my life."

Mrs Wilson was reinstated on Tuesday as president of the BUT after a brief suspension. She was suspended in December over two undisclosed, alleged "violations".

The appeals committee of the BUT lifted that suspension after it found no wrongdoing on the part of Mrs Wilson or BUT Treasurer Laurie Knowles, who was also suspended.

Belinda is a typical Bahamian union-cum-political animal ............... She needs to team up with Doc Rollins and Greg Moss.

Man...she must be as crooked as they all thought if they think she is fit for politics!! Must figure her to be corruptible enough for that nomination!!

Why? Why? Because she's loud?

I believe it is the FNM party and DR&gt; Minnis who has asked her. If she does not say what party. why is this a story at all.. I guess she just wants to blow her horn and say look at me: I suppose since the teachers are always voting for her . The FNM party may feel she can win a seat. It seems that many of the teachers are only after money and they could not care less about the "D" grade. just give them the money, and the tax payers will have to pay VAT..

I believe it is the FNM party and DR&gt; Minnis who has asked her. If she does not say what party. why is this a story at all.. I guess she just wants to blow her horn and say look at me: I suppose since the teachers are always voting for her . The FNM party may feel she can win a seat. It seems that many of the teachers are only after money and they could not care less about the "D" grade. just give them the money, and the tax payers will have to pay VAT..

Wasn't she an independent candidate in one of the previous general elections?

Does it really matter what party has approached her...if it's even true. But ergo this country's major problem; just about anyone holding a title or heading an office....even with obvious warning signs of dubious behavior is politically-qualified and shown support to continue the BS that is drowning this country. Until the post of AG is no longer a political appointment, these acts of misappropriations/misuse are not overlooked, and the perpetrators (Government Officials and Heads of Trade Unions) are put behind bars for their criminally-heinous acts.....rather than being praise or revered for their boisterious attitudes and belligerent personas; then and only then will we not have the idiots we have in front-line politics nor will we have another set of idiots tooting their own horns of impending political-careers.

My God........ Is this what our country has come to??? Please tell me that this is either a cruel joke or another one of her tall lies. Are we actually to believe that a lagitamate political party has asked this rude, bossy, coarse, hard-heel, big-lip, ill-mannered, bungie-nose, crab-foot, brash, street-walking, jungaliss to represent one of their constituencies???

For the sake of what's left of the Bahamas, I pray this isn't so.

@birdie: Don't be ridiculous! Only one party rewards people for having a criminal background and or being booted from some organization for questionable practices.

That's what I'm saying. Her character has PLP written ALL over it! birdiestrachan is a bias, partisan PLP supporter who would advocate for the PLP no matter what kind of scandal or skulduggery they are mixed up in. Birdie is a perfect example of what's wrong with Bahamians. Blind supporter of an unscrupulous government...... brainwashed by non-existing ideals...... and stuck on stupid. (Typical PLP)

What criminal background does she have?

Ya'll can't be talking about that union debacle. Union heads obviously have an agenda against her if they accuse her of stealing money they signed for. What the execs didn't know they signed off on the money? Pulease. They knew damn well they signed for it. But what they also know is once you say it out in public then the person is guilty.....