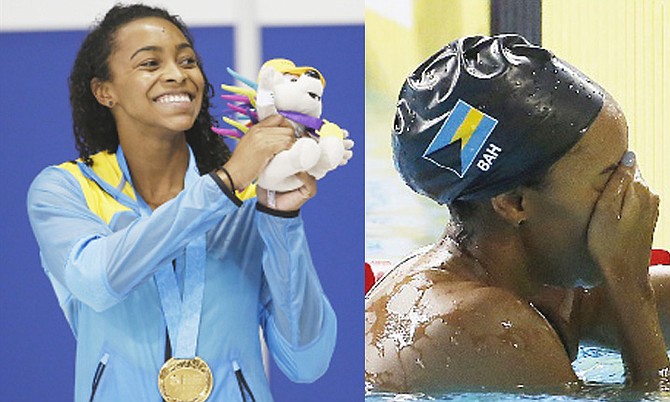 A Pan American Games record, two Bahamas national records and a pair of medals, inclusive of a gold and bronze, has left ‘The Golden Princess’ Arianna Vanderpool-Wallace beaming with excitement and more confident as she left Toronto, Canada, to prepare for the 16th FINA World Championships in Kazan, Russia, next month.

“I’m happy with my performance,” Vanderpool-Wallace told The Tribune over the weekend after another historic performance for the Bahama’ most decorated swimmer. “I’m hoping to be a bit faster at world championships as I will have to be a couple tenths faster to be on the podium in Russia.”

Vanderpool-Wallace, 25, was one of five Bahamians who left their mark on the Pan Am Games that saw the swimming competition come to a close Saturday night with Joanna Evans joining Vanderpool-Wallace and Dustin Tynes in inking their names in the record books.

On Friday, Vanderpool-Wallace put her stamp on her appearance at the meet by setting the Pan Am record of 24.31 seconds to win her heat in the preliminaries of the women’s 50 metre freestyle. The night before, Vanderpool-Wallace had opted not to contest the final of the 100m butterfly after she placed third in her heat and sixth overall in 59.33 for her first national record feat.

The decision obviously paid off for Vanderpool-Wallace, the two-time Olympian, as she came back in the final of the 50m free to pick up the gold medal in 24.38 and in the process was posted as her second national record as she erased her previous mark of 24.34.

“I’m glad I scratched the final of the 100 fly,” said Vanderpool-Wallace, whose résumé has her winning a medal at every international meet she has competed in except for the World Championships and the Olympic Games. “It’s not one of my main events and I would not have been in medal contention so I’m glad I saved my energy.”

Earlier in the meet, Vanderpool-Wallace picked up the Bahamas’ first medal at the games when she got the bronze in the 50m free. But Vanderpool-Wallace said there was no time for her to reflect on her double dose of medals, which has the Bahamas currently sitting in the top 20 on the chart.

“There wasn’t really much of a celebration,” admitted Vanderpool-Wallace, who shared some quiet time with her parents, Vincent and Tietchka Vanderpool-Wallace that night in Toronto. “I’m proud of what I accomplished in this moment but my journey isn’t over so there isn’t really time to celebrate. Perhaps after worlds there will be more in store.”

But looking back on her performance in the latter event, Vanderpool-Wallace wasn’t sure whether she was more thrilled about the Pan Am record or the gold. She gladly accepted them both for what they’re worth.

“Both the Pan Am record and the gold medal mean a lot to me,” she said. “I knew that I was capable of doing the two, so to have actually achieved my goal is a huge weight off my shoulders.”

And with the bigger challenge of competing against the rest of the swimmers around the globe at the Worlds, Vanderpool-Wallace said she would love nothing better than to make some more historic moments for the Bahamas.

“Right now with my time that puts me in 4th place in the world,” said Vanderpool-Wallace of the 50m free. “The other girls that I will be competing against will be fresh as it is their first summer competition so I will be heading back to my training base of Charlotte to get some rest and some fine-tuned training in before going to Russia.”

And just like Pan Am, Vanderpool-Wallace, who is coming off her sentational four gold medals at the CAC Games and a silver (in 50 butterfly) at the Commonwealth Games last year, has some lofty goals to chase after this year before she gets ready for the Olympic Games in Rio de Janeiro, Brazil in 2016.

“I’d honestly just like to swim faster than I did at this meet, and if that puts me on the podium that would be excellent,” said Vanderpool-Wallace, who will be making her second appearance at the Worlds where she was 26th in the 50m free in Rome, Italy in 2009. “But I’m just interested to see how I do and where that will put me going into the Olympic year.”

Vanderpool-Wallace’s feats at Pan Am produced just the second and third medals ever won by the Bahamas at the games and they highlighted a strong showing by the Bahamas’ five-member team. The first Bahamas medal at the games came in 2007 where Vanderpool-Wallace joined Alicia Lightbourne, Nikia Deveaux and Alana Dillette to win the bronze in the women’s 4 x 100m medley relay.

While she didn’t win a medal, Grand Bahamian Joanna Evans came close when she got fifth in the women’s 800m free in 8:37.18 on Saturday to lower her own national record of 8:39.61 at last year’s CAC Games in Veracruz as swimming came to a close. The performance came a day after Evans clocked 4:14.51 for sixth in the final of the 400m free. She qualified by winning her heat in the preliminaries in 4:15.51 for the fourth best time. Her national record is 4:12.14 that was done last year at the Junior Olympics in Nanjing, China.

Dustin Tynes, the only male competitor on the team, made it to the B final in both of his events. In the 200m breaststroke, he swam 2:18.13 for sixth in his heat and 14th overall in the preliminaries and came back in the B final for sixth in 2:18.14. Tynes’ time in the heats broke Jeremy Knowles’ 15-year-old national record of 2:20.31 that he set at the 2000 Olympics in Sydney, Australia.

Now that they are done at Pan Am, Vanderpool-Wallace, Evans, Tynes and Weech, will be joined by Vereance ‘Elvis’ Burrows in Russia where they will compete at the FINA World Championships. While Burrows didn’t make the team for the Pan Am, Morley didn’t get the cut for the Worlds.