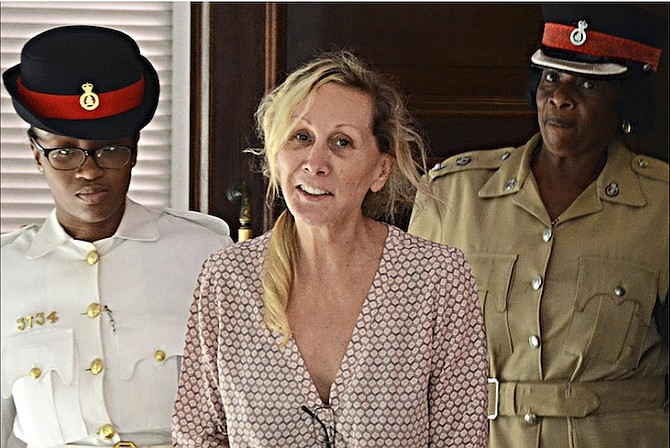 A WOMAN accused of her husband’s murder will learn today whether she will remain in custody until the outcome of the Crown’s appeal against a judge’s decision to grant her $200,000 bail.

Australian national Donna Vasyli, who spent four months on remand at the Department of Correctional Services, was unsuccessful on two previous occasions in getting Senior Justice Stephen Isaacs to release her on a bond.

However, her latest application, heard on July 9 and decided in yesterday’s hearing before Justice Bernard Turner, saw the widow of 59-year-old Philip Vasyl receiving a $200,000 bond from her trial judge.

The judge observed that Vasyli “has become much thinner than when I first saw her and it would be a blight on our prosecutorial system were she reduced to a chronic state of ill health.”

“Death while in custody always results in a national spectacle, in this case, it would result in an international one,” the judge added.

Vasyli, as conditions to her bond, would need two suretors to post bail.

She would also have to surrender her passport to the court, be fitted with an electronic monitoring device, be placed under house arrest until the completion of her trial and report to the Lyford Cay police station three days per week on or before 6pm.

Notwithstanding the conditions imposed by Senior Justice Isaacs, who could not give his ruling in person due to illness, Crown prosecutor Neil Braithwaite informed Justice Turner of the Crown’s intent to appeal. He then asked for a stay of the order pending a decision by the Court of Appeal, much to the dismay of Vasyli’s lawyers Elliot Lockhart, QC, and Murrio Ducille.

Mr Braithwaite argued that the Bail Act provides for a stay of a bail order upon the Crown’s indication of its intent to file an appeal within 48 hours of the decision.

Mr Lockhart countered that the statute law did not override a judge’s discretion guaranteed by the Constitution.

Justice Turner told counsel that he would give a decision today at 3pm.

Vasyli, meanwhile, was remanded into custody until that time.

The accused has been in the state’s custody for the past four months. Senior Justice Isaacs had denied her bail within days of her March 30 arraignment in Magistrate’s Court and then on a second occasion on May 1 after the Court of Appeal had remitted the matter to him to explicitly state why he had denied bail.

In May, the Court of Appeal rejected her bail appeal, prompting her lawyers to consider taking the case to the London-based Privy Council for a final decision.

Her lawyer made a subsequent application for bail, which was heard on July 9.

Vasyli had pleaded not guilty to the murder charge in a formal Supreme Court arraignment before she was given a trial date for September of this year.

At the bail hearing on July 9, Vasyli’s lawyers argued that their client’s health has deteriorated since her incarceration due to the conditions at the prison.

Mr Lockhart drew the judge’s attention to Vasyli’s affidavit, which said that she has been constantly feeling weak and nauseous and has been experiencing headaches since a hard fall on June 15.

The lawyer emphasised that his client’s health was at risk the longer she remained in custody and unable to get the necessary medication she required on a regular basis.

These concerns, he added, were highlighted in supporting affidavits filed by two officials with the Australian High Commission, who noted Vasyli’s apparent weight loss.

Mr Lockhart also stressed that his client had a constitutional right to having adequate time and facilities to prepare her defence against a criminal charge.

He said he and Mr Ducille would not be able to be properly instructed in this matter given the limited visiting hours and conditions at the Department of Correctional Services.

Mr Lockhart also rebuked the Crown for not only charging his client on weak evidence but for not supplying her counsel with additional documents they had promised at Vasyli’s formal Supreme Court arraignment. He also said that DNA evidence was still not forthcoming, even though the accused’s legal team would be required to proceed at trial in a few weeks.

Crown respondent Neil Braithwaite countered that all of the arguments being raised by Mr Lockhart were not new and had been considered in both of Vasyli’s earlier bail hearings, in the Supreme Court and the Court of Appeal.

The latter, he said, upheld the judge’s finding that bail should not be granted ahead of trial.

At the earlier hearing, Mr Braithwaite maintained the Crown’s position that there was no material change in circumstances.

Senior Justice Isaacs, in his written ruling delivered yesterday, came to the decision after considering a number of authority cases including Hurnam and Bradley Ferguson.

“Whether she appears for her trial may have seemed a difficult question on her first and second bail hearing days and weeks after her arrest respectively but there is much more gravamen to the applicant’s assertion that she will, including the fact that she has family, two homes and a business in the Bahamas,” the judge noted.

“Additionally, as her case has taken on a certain notoriety, it appears in her home country of Australia, as well as in America, I expect as she has a son that lives in Florida, those countries I assume would not welcome her before her trial is disposed of.”

The judge further determined that her lack of antecedents made her an unlikely danger to society or will interfere with the course of justice.

“I would be remiss if I did not add my own observation that the applicant has become much thinner than when I first saw her, and it would be a blight on our prosecutorial system were she reduced to a chronic state of ill health,” the judge said, emphasizing that while death in custody “always results in a national spectacle, in this case, it would result in an international one.”