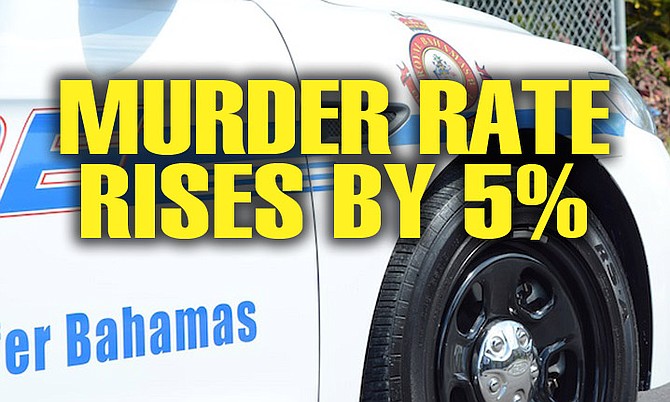 MURDERS are up five per cent compared to the same time last year, an analysis into the country’s homicide figures for the first five months of 2015 has revealed.

The Tribune’s analysis into last year’s police crime statistics found that at the end of May 2014, the country recorded 60 murders. This year’s count stands at 63, the most recent a fatal shooting in Yellow Elder Gardens on Friday night.

According to police, the latest murder happened shortly after 9pm when the victim was walking in a park off Graham Drive, in Yellow Elder Gardens. A man armed with a handgun approached and shot him multiple times before fleeing. The victim was pronounced dead at the scene. His identity has not been released.

He was one of five people murdered in separate incidents last week.

FNM Leader Dr Hubert Minnis, when contacted by The Tribune yesterday, said the government is “missing the point” on crime. He said the government should put emphasis on reducing the youth unemployment rate, which he said would cut down the number of “angry” young people engaging in criminal activity.

Dr Minnis said yesterday: “The prime minister said if it requires him putting policemen on every street corner he would do it. But he’s missing the point. Crime is rising, murder is rising, and unemployment is rising. The unemployment rate in the young population is astronomical – 31 per cent. Those that are dying are the young people.”

The bloodiest month for the year so far has been February, with 15 murders, according to The Tribune’s records, followed by May (14), March and April (12) and January (10).

In contrast, there were only eight homicides in February 2014 but 16 in May and 14 in April raised the total to 60 after five months, according to statistics provided by the Royal Bahamas Police Force last year. June and July were relatively quiet months with four and seven murders respectively.

Last week, Prime Minister Perry Christie said during his budget communication that the government has invested a “significant” amount of money in the Royal Bahamas Police Force to help it obtain additional power and resources to enhance its presence and visibility around New Providence.

Stressing that crime remains one of the greatest issues facing the country, Mr Christie said: “…Investments in police equipment, in the form of cars, surveillance and protection equipment, are highlighted in this year’s capital budget.”

Ultimately though, in reflecting on the steps that must be taken to curb crime, Mr Christie said last week that the solution must be holistic, not “piecemeal.”

One of last week’s victims, 31-year-old Merit Forbes, was remembered by friends who covered the blood-stained area where he was killed in Pinewood Gardens on Thursday evening with sand and placed a flower on top. Some, on social media, said Forbes – who was charged with murder in 2011 – was trying to turn his life around. He was out on bail when he was killed.

Police Chief Superintendent Paul Rolle said Forbes was repairing a vehicle in his neighbourhood when he was ambushed by men shortly after 6pm. The men pulled up in what is believed to be a dark coloured truck or jeep.

One man got out of the car and discharged shots in the victim’s direction, prompting him to attempt to flee. Then, another man got out of the vehicle and discharged several more shots, fatally wounding him. Forbes died at the Princess Margaret Hospital. Police have launched an island-wide manhunt for the suspects, although, according to Police Assistant Commissioner Stephen Dean, they are not yet following any significant leads.

Georgette Rahming, 21, was shot dead on Tuesday night at her home on Palmetto Avenue, off Baillou Hill Road, and on Tuesday morning, 41-year old Trevor Smith, of Catnip Close, Fox Hill, was shot and killed on his way to work during an armed robbery off Soldier Road.

If you add the unclassified deaths that will push the homicide rate even higher , Meaning all the additional resources that was pumped into crime fighting (new police cars and equipment, increased work hours for police, urban renewal, defense force officers on the streets) yielded negative results. The bottom line is that murder, for more than 70% of the people who comit this crime, is unpunished. Now imagine what the results will be like for persons who rob, steal cars break into homes or businesses? Even rape. The conviction for person's committing murder (even more than one) is too low and the punishment is not severe enough to be a deterrent.

The police need to understand the crime these people are involved in. I think I know more gang names than they do. Do they even have potential victims on their radar or do the just allow the retaliations?

Almost think gladiator matches in the arena for these bredren would be better to settle it.

Honestly , the jail in a community is just plain stupid. Don't expand it there.

you and Mr. Christie are both missing the point as to what is needed to arrest the crime dilemma. Back in 2009 you withdrew your support from me even though you'd promised me it. In the closet you commended but publicly stood aloft to punching your card in support of my rehabilitation into mainstream society. Within two (2) years from today's date you will be soliciting my support.

That now said but not to lose the point, you and Mr. Christie are wrong to believe that jobs, in the guise of the lack of money, is the pain that aches the hearts of our youths. If I had not held fast to my Faith and believed in myself, I too would have washed up, as well, on the 'shoals of crime'. According to your own words I am clear to say that you, nor Mr. Christie, have the message of HOPE.

In the movie titled 'Shawshank Redemption', Morgan Freeman highlighted it best "Hope is the greatest thing ever". And you, nor Mr. Christie, can ever appreciate this fact. Please give my regards to Pat.

Crime section of Tribune only reports the incident and the court session. What about more details of the incident and profiling the backgrounds of these people afterward. How did they enter? What was their occupation? Do they have kids? What kind of weapon? Updates of whether police suspect motive. Were they acquaintances? Nature of crimes if they had a record? Their clique?

Are they scared to report in depth? I've seen every minor update on the Australian, what about who's killing our boys?

Does anyone have an update on where the guns come from and what is being done to stop them. Most of the murders are committed with guns. The weapons and the ammunition have to get here from outside.

Comrades don't you think the PLP cabinet needs to explain to citizens and residents, how is it they have cut the policeman's enforcement budget but the PM's office budget for 2015/2016 will be increased from three millions to just shy of eight millions? Pray tell me, what exactly is da PM planning to spend taxpayers eight millions on?

They report the murder rate - but how about the birth rate? Has that increased also? It is a balance you know.

If you keep finding tacks in your driveway every morning, and many times miss some that you try to pickup and end up with flat tires - is your ONLY solution to keep buying more and more expensive and durable tires?

Would anyone even THINK to consider "Where the hell are all these tacks coming from?"

Comrades to put the tiny nation of Bahamaland with a population under 400,000, where the 12 months budget of PM Christie was just increased from USD$3 millions to USD$8 millions, let's take a minute to put it in its correct taxpayers funded prospective. You need to know that the Prime Minister of Canada's, far leading some island nation, yearly office budget was just increased to CAD$8.25 millions and Canada has a population of 35 millions people.
Would the PM please explain to the people of the tiny island nation of Bahamaland - what exactly in the hell will he spend USD$8 millions taxpayers monies on?

Tal - we need to organize a nationwide buying strike for July 9th. Nobody buy a damn thing that day (except bus money to get to work or urgent needed medicine). Pack a lunch to work. NO MONEY to be spent.

Get a bunch of people together too (like 100 cars) to drive SLOW along Bay Street and slow up the taxi drivers if they don't agree to strike.

This is a load of bull - and it's time to do something.

Refusing to spend money is a way of "doing" something without anyone knowing you are.

Can this be organized? Will people participate? Does anybody give a damn that we are sinking into the ocean?

ONE HUNDRED AND FIFTY is the amount of murders to expect before December 31, 2015, based on the number of murders that took place in the first five months. Some Eightyseven more families, mostly Bahamian, will feel the cold, chilling sting of death., when someone in their family, more likely a male, is murdered before the end of this year. Wake up Bahamas!

and more than likely the not gang related (cause we can't call it that)...gang related retaliation style murders of our model well mannered children...

Comrade The Madhatter, protests can take many forms and can be effective but to call for a mass boycott against local business is not a protest against government. It will have zero effect or influence over government policy.
I am sure you must realize that in our Bahamaland, it has always rested with the poor black people who are the only one's to turn out to wear the free to shirts to protest, while the whites and black middle classes stay secluded in their homes. Every major battle ever won, be it worker rights or wage benefits, or major pieces of social legislation that have ever been won in Bahamaland have all come about via the direct and exclusive efforts and sacrifices of the black working poor.
.