Brides-To-Be Spend An 'Evening By The Watters' 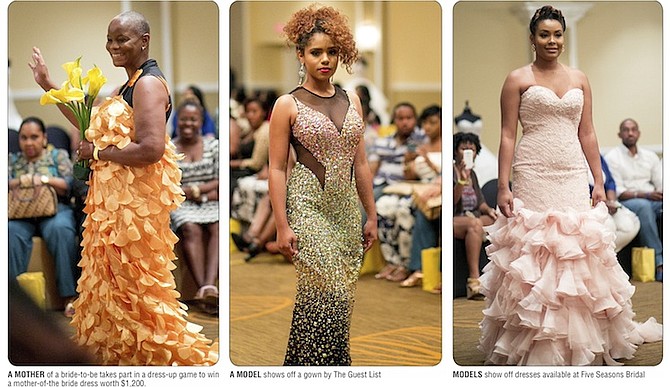 WATCHING shows like TLC’s “Say Yes To The Dress” and “Four Weddings”, make many brides-to-be yearn for professional advice and consultation for their big day.

And here in the Bahamas, we have our very own bridal consultant powerhouse in the person of Tennille Darville of Five Seasons Bridal.

Her professional expertise, knowledge and love of weddings has allowed her to make the dreams of scores of couples come true in recent years.

To show the public just what they have to offer for the upcoming bridal seasons, the boutique on Sunday hosted its third annual runway show.

Held at the Meliá Nassau Beach Resort, the event featured “An Evening by the Watters”, where a selection of Watters wedding gowns were modelled throughout an entertaining show emceed by Kedar Clarke and Anastarcia Huyler. Other designers available at the Fives Seasons Bridal Boutique and gowns by The Guest List were also showcased for audience members, which included future brides, grooms and whole wedding parties. There were also games and prize giveaways, including a grand prize which included a wedding dress and accessories, a tuxedo, two bridesmaids dresses, makeup, photography, a cake and a two-night stay at the Meliá and more.

As an attendee and buyer at the annual New York Bridal Show, Tennille she always experiences an event for which organisers go all out, allowing her to sit next to people like Lori Allen from Bridals by Lori and rubbing shoulders with Randy Fenoli from “Say Yes To The Dress”. “They treat us buyers and store owners with a certain level of VIP status when it comes to the atmosphere and the eats and drinks, but in the end it is all about the dresses. Being in that arena and having that experience, I wanted to bring that to the Bahamas. We carry the same dresses that all of the stores in New York sell. I wanted our Bahamian brides and grooms to have an experience that we have when in New York. With my shows I aim for elegance and sophistication,” Tennille told Tribune Woman.

She herself prefers intimate settings, which is the reason why she keeps the Five Seasons Bridal Show relatively small, with only a few select vendors.

“These are vendors that we work with on a regular basis and have never let our clients down. There were only a few new vendors this year because we are branching out. With our vendors and their services we provide to the bride and groom that are looking to get married a one-stop shop, and the level of vendors that we are providing are of the highest class,” said Tennille.

Recalling the first time the event was held, Tennille said it was completely overwhelming. She said at the end of the evening as the guests were leaving, she just stood in awe and could not believe the amount of support she had received.

“It was held at SuperClubs Breezes and they ran out of chairs. We planned for about 250 people and there were more than 300 people in that room. Last year, we held it at the British Colonial Hilton where we planned for 300 people and almost 400 people showed up,” said Tennille.

Anticipating that interest in the showcase would once more increase for 2015, the company sought a bigger and comfortable space. They decided to go with the Meliá, where the Five Seasons team was welcomed with open arms. Planning for a 400-person turnout, Tennille was a little disappointed to discover that they fell short of expectations.

“I also have to take into consideration that there are a few varying factors this year. For the first time we are hosting on a Sunday; we usually hosts on a Friday night. We had to increase the price because of the bigger space, so the tickets went up slightly. When I think about those variables, obviously things will change. I am a realist and I think people are mindful, cognizant and they are being very careful how they spend their money, so it is understandable. Overall, the room is still full of a lot of exciting people today. Brides and grooms are ready to get married, so I am excited and happy about the turnout. The girls will tell you, three days after the show I am back at it, in planning mode again,” said Tennille.