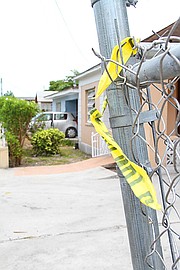 A 36-year-old man became the country’s latest murder victim when he was shot multiple times while visiting his girlfriend on Monday night.

The shooting death occurred shortly after 10pm off Wulff Road and is the country’s 64th homicide for the year, according to The Tribune’s records. He is the sixth person killed since last Monday.

Police said the victim was sitting on a wall with several men in front of a home on Peach Street, when a man armed with a handgun approached him and shot him several times before fleeing the area on foot.

The victim was pronounced dead at the scene. He has been identified by police as Vance Franky Fenelus of Peach Street.

Police are also investigating a shooting incident that left a man fighting for his life in hospital.

According to reports, shortly after midnight on Monday, two men who knew each other were involved in an argument at a home located at Butlers Way off Carmichael Road, when one of the men shot the other in the chest with a handgun.

The man with the handgun then fled the scene. The victim was rushed to hospital, where he remains in serious condition.

Police are investigating and are seeking the whereabouts of the gunman responsible.

So use to it now...another day at the beach!

FNM supporters probably did it.

Some are saying that some of these killings are gang related. If a known rival gang member is caught on another gangs turf he is executed. If a member of a gang is killed then other members carry out revenge killings. Some say there are more than 50 gangs operating in the Bahamas, most in New Providence. Some gangs recruit members from junior and high schools and other members are "forced" to join gangs simply because they live in an area where the gang operates. Despite there being laws on the books outlawing gang activity, gang leaders and having membership in a gang, not one single person has been charged under these laws in the Bahamas.

Ask me the question..... is the police doing enough? The answer is no . Too often you and I would pass the police on the road flexing their muscle or seeking to intimidate someone for a traffic violation, while they are doing their job , the real crime is been committed by a group of boys sitting on the block down the road. They would have driven right by them on a daily routine. Now you tell me what are they congregating in that very same spot for everyday? Am sure we would have all heard the scenario , that were there is smoke , there might be a fire !! plus have ever had to dial a station or 919 for an incident lately? It is as if you are interupting a break period or a criminal . The police officer at the desk wants you to do their job for them , by giving them full details even if you are trying to prevent or alert others around as to what you are doing. Our police officers needs so much more training in the area of people to people skills. While they may protect the nation at large , they are falling in decay on the moral aspect of their personal duties

I agree with the above writer,is the police doing enough?it seems to me that any one can ride around anytime of day anywhere with an AK47 or any other high powered weapon and don't ever be detected,but the police are quick to pull you over for missing plate or some other minor traffic infraction,but the Criminals in known areas are free to roam and do what they want and the police know who the criminals are,known criminals are known and the police cannot seem to do anything with these scum who have a bunch of young illiterates worshipping them as some Demi God.