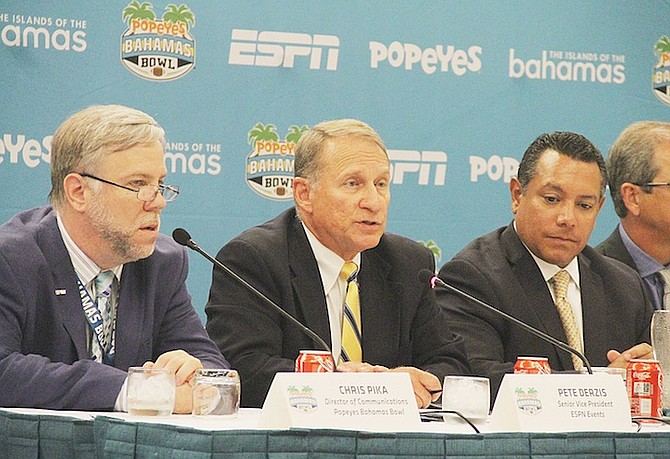 In its inaugural edition, The Popeyes Bahamas Bowl made an indelible mark on the NCAA Bowl season, and now the event looks to extend its reach through a partnership with “the worldwide leader in sports.”

ESPN Events officially introduced itself to the Bahamian public at the 2015 Popeyes Bahamas Bowl Summit yesterday as it assumes its role as owners and operators of the upcoming event.

“It’s a special day for us and behalf of my colleagues at ESPN we’re very excited to announce the acquisition of the Popeyes Bahamas Bowl. It is an exciting time to add this incredible event to our portfolio of events we do throughout the United States,” he said. “As a company we have a great commitment to college football. We have built an incredible industry as a rights holder from a television standpoint, so the natural extension for us was on the event business, both in the postseason with the 13 bowls as well as the preseason with the three events we do. College football is second only to the NFL and it continues to grow.”

The bowl was acquired from Bahamas Bowl, LLC, which owned the inaugural game in 2014.

The 2014 game featured Western Kentucky of Conference USA against Central Michigan of the MAC in the first FBS-level bowl game outside of the United States or Canada since 1937. The Hilltoppers held on for a 49-48 victory over the Chippewas in one of the most memorable bowl games of the 2014 season.

Derzis said the decision to acquire the Bahamas Bowl was one beneficial to both parties.

“For us I think it was a combination of factors. We work with the conferences here. We have been partners with them in a variety of our other bowl games so we have a great comfort zone. We know them well and we work exceptionally well together,” he said.

“I would be less than candid if I didn’t mention that the Bahamas as a destination is arguably one of the greatest opportunities for young people to attend. So, I think it is a combination of all of these things coming together that interested us in pursuing there opportunities.”

With ESPN Events on board, Derzis outlined the results of the summit and mentioned some of the changes we may see at this year’s event, including a marketing campaign geared specifically toward locals and the possible online streaming of the game live on ESPN3.

“We had a great session. We met as a team, all of the stakeholders, for two hours and came out with some incredibly positive suggestions. I think what you are going to see now is all of those suggestions take focus in coming up with a basic marketing and outreach plan that includes everything, including educational seminars to certain segments to gain a better understanding of what American football is. What you will see is a comprehensive targeting marketing plan and we are excited about building upon it,” he said.

“We want to build a long term sustainable business for this game. One that gives back to this community, one that provides a great experience for the student athletes coming to your country. One that highlights the culture of the Bahamian people in the telecast, these are incredibly important points that we will factor in to all the decisions we make around the development of the bowl game. From our standpoint to be able to host an event in a world-class destination as the Bahamas, a world-class resort as Atlantis. When you put all of those together what you have is a unique and exciting opportunity to build something that will have a long lasting sporting activity for the people of the Bahamas.”

Popeyes Louisiana Kitchen has extended its title sponsorship in a multi-year deal with the Popeyes Bahamas Bowl.

“Popeyes provided terrific support for the inaugural Popeyes Bahamas Bowl last year,” said Pete Derzis, senior vice president of ESPN Events. “This multi-year extension will allow us to build on the work they did last year and highlight this unique bowl experience.”

Added Hector A Muñoz, chief marketing officer in the US for Popeyes: “This news signifies the reach and power of the Popeyes brand. We have established a new tradition with the Popeyes Bahamas Bowl that will allow us to connect with fans in a forum they love — college football. Big brands do big things and we cannot think of a better demonstration of Popeyes growth and success. We are pleased to make this announcement.”

Britton Banowsky, commissioner of Conference-USA who also served as president of the Bahamas Bowl LLC, said the growth and development of the event will reach its true potential by year three.

“Year one was about getting the game launched, executing the game, doing it technically well, but we knew it was going to be a challenge to market locally because there was no brand recognition,” he said.

“People just didn’t know. We tried to do as many things as we could, but we learned so much from that. The venue is a manageable size, so I do believe, if not this next year, by the third year it’s going to be a high demand event locally and people are going to re-arrange their schedules on Christmas Eve to carve out three hours for the event.”

According to an analysis of expenditure on the 2014 game, the Popeyes Bahamas Bwol spent just over $1.2 million in the Bahamas. That number did not include the money spent by Popeyes for activation in Nassau.

The game reached nearly 12 million viewers in the United States and saw over 13,000 attendees locally. There was a strong social media presence with nearly 56 thousand posts, 141 million impressions and 1,587 articles.