Video: Peter Nygard Ordered To Return To Court In September 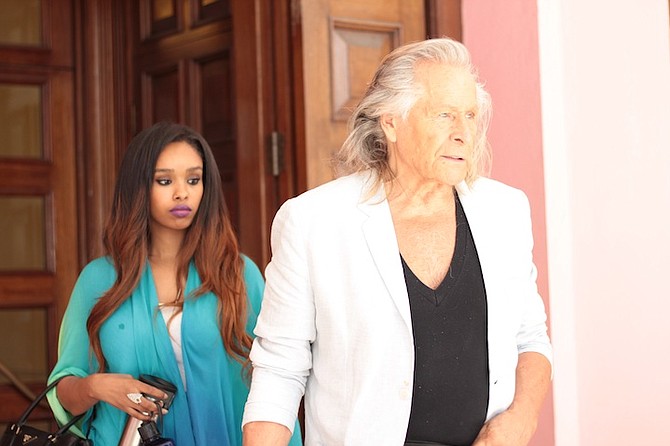 PETER Nygard, the Canadian fashion mogul, has been ordered to return to court in September for the continuation of proceedings against him concerning his alleged contempt of court.

Justice Rhonda Bain made the ruling in the afternoon session of a hearing on Friday. It stemmed from Nygard, on May 7, being served by environmental group Save The Bays (STB) with a legal notice of its application accusing him of breaching the terms of an injunction barring him from engaging in development activities at his home in Lyford Cay.

Not only was Mr Nygard ordered to appear on September 28, but he was informed that he will be cross-examined concerning the allegations brought against him.

On Friday morning, Nygard’s lawyer, Elliot Lockhart, QC, asked the judge to reconsider her initial position that the Canadian multi-millionaire be made to appear at subsequent hearings.

On Thursday, Nygard had not shown up at the Ansbacher House courtroom, which prompted a legal back and forth between Mr Lockhart, and STB lawyer Fred Smith, QC, concerning whether Nygard should be present for the proceedings.

The judge ultimately used her discretion to order that Nygard appear in her courtroom.

“We would ask that he be allowed to leave and the proceedings continue in his absence,” the lawyer added.

“If there is need for him to give evidence we would have to summon him again?” Justice Bain asked.

“I will conduct his defence,” the lawyer said, emphasising that while he could not tell the court how the matter would end “I have a course in my mind where I will take it”.

Mr Smith said that, while he would not advise counsel on how to conduct its defence, “I do object to the indication that this case is going to be handled by him in a fluid way.”

The lawyer added that guidelines exist for counsel representing an alleged condemner which are supposed to supply the court and applicants with preliminary points they intend to argue.

Mr Smith added that Nygard had been made aware of these proceedings for some time and as “this is not intended to be a trial by ambush, we should have had notice before now.”

After argument, Justice Bain ruled that Mr Nygard is not excused “and on the adjourned date Mr Nygard is also expected to show up”.

The ruling shocked Mr Lockhart. “I’ll put it in the record that you indicated you are shocked,” the judge said.

Mr Lockhart said he wished to address the court on a case authority - Thursfield v Thursfield - cited by Mr Smith on Thursday. “You will see from this decision that there is no absolute requirement for an alleged condemner to be physically present at any time during the proceedings,” he argued.

“However the court has the power to order him to be in attendance. There is nothing that prohibits him from doing so as was the case here. The condemner never attended despite the order and the court vested upon him the maximum power it could.”

Mr Lockhart said the absence of the condemner did not stay the proceedings nor did it affect the power of the court’s final judgement. He noted that he complied with the court’s order and produced Mr Nygard for 10.30am as requested.

“So Mr Nygard has no desire of flouting any order of this court,” the lawyer submitted, adding that he was not one to “advise him to travel down that road”.

Mr Lockhart asked the court’s discretion to reconsider her decision. Justice Bain said she would do so after actual proceedings began, at 12.15pm.

Mr Smith drew to the court’s attention photographs which purported to show that over the course of December, 2013, substantial amounts of sand were progressively dredged from the Clifton Bay side of the Lyford Cay property and pumped onto Nygard’s private beach.

In July 2013, Justice Bain ordered that until the conclusion of judicial review proceedings challenging the legality of the construction of a groyne and the dredging of the sea bed off Nygard Cay, neither activity could continue to take place.

STB’s battle with Nygard over the construction/development activities at his Lyford Cay home stem from allegations that the activities have led to substantial growth of the property. The group claims that the Canadian has almost doubled his property’s size, from 3.25 acres to 6.1 acres, since he acquired it in 1984, by allegedly reclaiming Crown Land from the sea.

The advocacy group is alleging that Nygard achieved this without the necessary permits and approvals, claims that have been denied by Nygard.

The proceedings will resume on September 28, 29 and October 1 and 2.

Why are we so tolerant of this miscreant? He continues to thumb his nose at us and our laws. Why is he not in jail for contempt? Let's see what happens if one of us doesn't show up for our court appearance? Can you say arrest warrant?

Comrades allegations yet to be proven but wouldn't you find it strange that following the July 2013, Justice Bain order to cease any work until the conclusion of judicial review proceedings challenging the legality of the construction of a groyne and the dredging of the sea bed, might have been allowed by government to continue off Nygard Cay? Therefore, I pose the question to the PLP Cabinet that wouldn't any normal citizen/resident out there being accused of dredging not have been investigated by the proper authorities and proper reports written and filed - and if this was not performed, then why not?
I am surprised "King's Counsel" Freddy seems not to have requested the Honourble Justice to make the government produce such reports, or an explanation as to why no investigation was ever conducted?

Just an idle thought, but I've always wondered whether the Miss Universe pageant was a huge fishing net constructed for ageing men to select their next pocket piece from the youngest and most beautiful women in the world (after the "old" one was discarded of course)

"contestants may not be married or pregnant. They must not have ever been married, not had a marriage annulled nor given birth to, or parented a child. The titleholders are also required to remain unmarried throughout their reign"

Just plain weird, what does "not have ever been married" have to do with physical beauty?

Thisours, like all things for auction, untampered merchandise is worth more. If I had a daughter and she possessed physical beauty there would be a cold day in hell before she's allowed to be paraded like a piece of meat in front of people in a superficial circus like a pagent. Young women need to realize it's the 21St century, get a education, get a career, and command respect. Enough with these stupid primitive activities.

Privileges of being wealthy.... We can speculate he likes her for her physical assets, she likes him for his $$$$, nothing wrong with a good business arrangement....

She doesn't look like a happy camper... probably has no clue what it's all about.

He obviously has no respect for the court showing up in his Disco Bobby Brown attire with young gal in tow in attempt to bolster his facade of virility.

As a long time guest and Permanent Resident of this great country I have to agree. It is so sad that so many of us try to do so much to try to be good residents of this country; to contribute to local charities; to work for the betterment of one of the most beautiful places God created on this earth; only to be tarred by the conduct of this egomaniacal, serial law breaker. He flaunts the law and publishes strutting videos claiming to own the country and the current government stands by, looking like a bunch of grinning cheap suits, bought and paid for. It's disgusting.