Insight: Chaos In The Plp 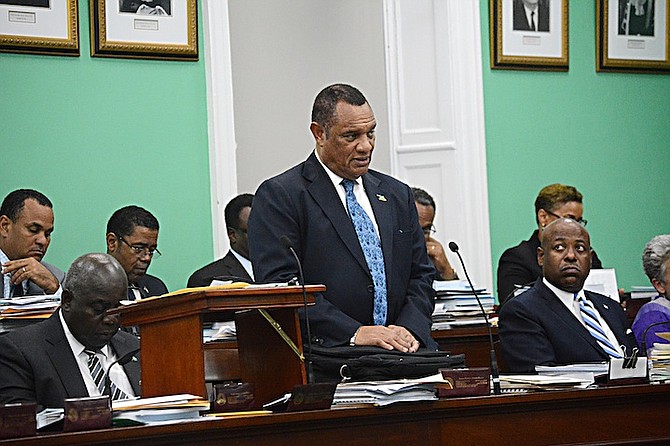 For the past two weeks the Progressive Liberal Party (PLP) has been mired in internal chaos, with two of its members of Parliament abandoning ship in near succession, citing the party’s poor leadership as a main catalyst.

The PLP’s love affair with the old guard - those senior members who put party protocol and bureaucracy over fresh ideas and freedom of speech - is another point of contention that has frustrated newcomers to the organisation.

This week, the PLP will no doubt be in full damage control mode as its party members try to downplay the catastrophe of losing two of its “new generation” leaders in less than two weeks. The mud throwing and the name sullying has already begun, with PLPs immediately casting aspersions on defectors Greg Moss, Marco City MP, and Dr Andre Rollins, Fort Charlotte MP.

Some have said the two were never truly members of the PLP and had likely joined the party just to win a seat in Parliament and a place in the government, so their vitriolic attacks on the PLP and its leader, Prime Minister Perry Christie, are born out of dissatisfaction of only being a backbencher.

Bamboo Town MP Renward Wells, who last week admitted he was contemplating his own resignation from the PLP, may be the next one out of the door.

Diehard PLPs will say that this does not reflect negatively on the party or Mr Christie. While the words of Dr Rollins and Mr Moss might not resonate with the PLP’s rabid base, they do strike a chord with moderate or swing voters who vote on substance, not party colours.

So far this term, we have seen higher unemployment, a rising murder rate and a new tax that negatively impacts the poor and middle class. We have also been saddled with Cabinet ministers who believe public disclosure means pontificating in Parliament, instead of answering the tough questions about what is going on in their ministries.

Most of the people I speak to about the upcoming election are not excited about what seems the inevitable possibility of a third term of Mr Christie, given the leadership quandary in which the FNM finds itself. Many voters, like those newcomers who were ushered into the PLP simply to stack the 2012 election odds in the party’s favour, hoped that the Centreville MP would have engaged in some sort of succession planning.

Mr Christie continues to refer to this era of his political life as the “twilight” of his career, yet there is no concrete evidence that he will step aside before or after the next election to inject some fresh blood and energy into what is increasingly being seen an antediluvian party.

There are rampant rumours that other MPs are dissatisfied with Mr Christie and are supportive of a reported leadership bid by Deputy Prime Minister Philip Davis. Yet, the prevailing thought, I am told, is because Mr Christie can win a general election it is better for PLPs to back him instead of supporting an unknown variable.

The PLP, while in opposition, lost two of its members - Kenyatta Gibson and Malcolm Adderley – and despite the stinging blows those men wielded at Mr Christie as they left the party, the PLP was able to win a hotly contested by-election in 2010 and the 2012 general election by a wide margin.

Mr Gibson, the MP for the former Kennedy subdivision, quit the PLP in 2008 and joined the Free National Movement (FNM) the next year. When he left the PLP, he branded Mr Christie as a “washed up, has been, egotist.”

But he didn’t stop there.

“So as to make it clear, I wish the record to reflect that Perry Christie is no longer fit to lead the party of Pindling, Butler & Hanna,” Mr Gibson said in a statement about his departure from the PLP. “He is arch-mediocrity, captain of all things small and petty, master of all things which are insignificant and void. He is best described as the man who is an expert at using shallow words dressed up in glittering phrases. His word and promises count for nothing! Mr Christie, let me offer you some advice that most of your parliamentary colleagues speak of privately behind your back. They are the words which Cromwell uttered to an English Parliament: ‘You have sat too long here for any good that you have done, Sir! Depart I say, and let us have done with you! In the name of God, go!’”

Similarly, Mr Adderley had brutal words for the PLP’s leader after he quit the party in 2010. Mr Adderley said he and his family suffered the “worst personal experience” they had ever faced during the seven and a half years he was an MP due to a deteriorating relationship with Mr Christie.

Mr Adderley also said he was the victim of “vicious politics and hatred” from those “wretched beings outside the boundary” of his constituency and was unable to help his constituents as he would have liked during Mr Christie’s first term as Prime Minister.

Despite these attacks, Mr Christie was able to retain his post as PLP leader and is now enjoying his second, non-consecutive term as Prime Minister. Yet the old shortcomings that plagued him in his first term continue to dog him.

Mr Christie and the PLP must realise that it is time for the leader to step aside, for the good of the country and the party. Surely there must be more than one man fit to lead the PLP; if only that potential leader would have the courage to step forward.

What next for the “new generation”?

If our history tells us anything, both Greg Moss and Andre Rollins will have a hard fight to remain relevant and retain their seats after the next general election.

Their arguments sell newspapers and strike a chord with many people; however, whether that will translate into votes at the polls is another thing. They should both take note of the fate of Branville McCartney, who left the FNM in a huff of displeasure to later form his own party.

While the Democratic National Alliance acted as a spoiler in the 2012 general election and won more than 10 per cent of the vote, the fact that Mr McCartney could not recapture his own seat was disheartening evidence of voters’ attachment to the two major political parties.

From all accounts, Dr Rollins does not have the favour of his constituents, some who have said he is not visible in the area and is not a good representative. Meanwhile, the head of the PLP’s Marco City constituency branch told The Tribune last week that Mr Moss does not connect with the grassroots and suggested the MP has become one of the political elites he so despises.

However both men possess a zeal for public life and appear willing to put their convictions over party politics.

Their willingness to buck the party line has been a refreshing change from the sea of brown-nosers and carbon-copy politicians who all laud the Prime Minister at every available opportunity instead of admitting that many see Mr Christie as a disappointing leader nearing his expiry date.

Hopefully their actions will spur others to continue to hold this government more accountable, no matter the consequences.

T rust me on this one Moss and Rollins do not care about any one but themselves.