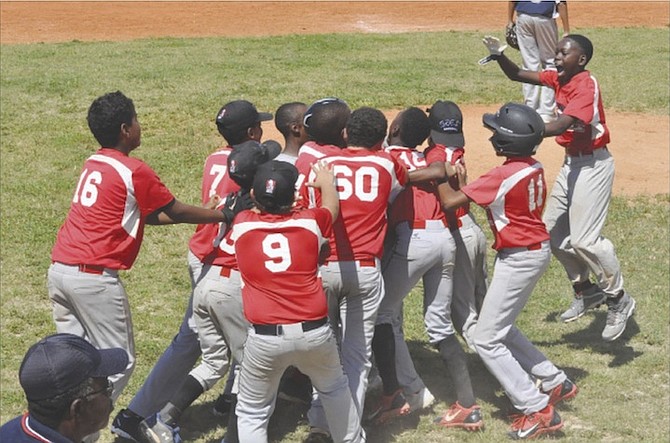 The Bahamas Baseball Federation’s 13th annual Andre Rodgers National Baseball Championships came to an end on Sunday in Grand Bahama with teams from the host Grand Bahama and New Providence splitting up the hardware in the various divisions.

Federation secretary general Theodore ‘Teddy’ Sweeting said the tournament lived up to its advanced billing with some exciting matches held over the four days of competition.

“For us, we were able to see some very exciting games in respect to all of the islands who competed,” Sweeting said. “In the bronze medal game in the 13-15 division, we saw Abaco playing Eleuthera to extra inning. Abaco got the bronze for their first medal ever in the tournament.

“We were very pleased with the fact that the Family Island teams made the sacrifice to come to the tournament. Not having one of our largest organisations, Freedom Farm, not present put a damper somewhat on the attendance of the tournament, but we had a large crowd every night from the spectators in Grand Bahama on the days that we had the nationals.”

From all perspectives, Sweeting said the tournament was a resounding success and they were able to crown all the champions in each of the six divisions. However, he said when they host their annual general meeting in November, they will have to find a way to ensure that they can accommodate all of the island affiliations in all of the divisions in the future.

“We want to ensure that at every nationals, we have a full complement of all of our membership and hope we can support those memberships who will need our help in attending the nationals. We know that Freedom Farm had some challenges this year and so instead of just sending one or two teams, they decided not to send any.”

The tournament turned out to be an exciting one with the following results posted:

Bronze medal - Abaco All  Stars in a come-from-behind victory over Eleuthera in extra innings.

As this is the only tournament of a national magnitude in the country, Sweeting said they will also be debating at the AGM ways for the federation to be able to lure all of the top players wherever they are playing overseas in whatever league to come home and participate in the nationals.