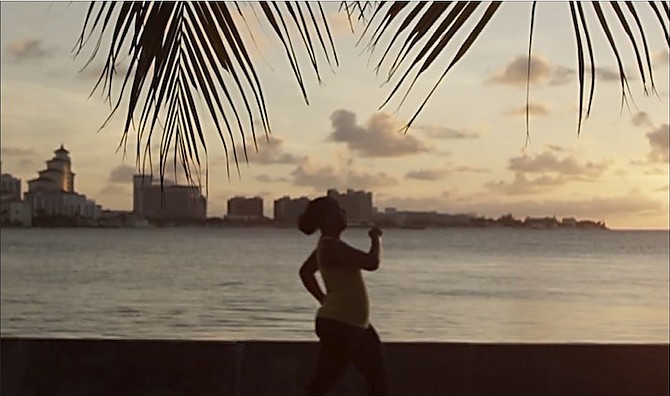 An image from the Stronger Bahamas video showing a woman jogging in Nassau. A male model featured in the video has complained that the pay was less than $100 for a two-day shoot and said he felt he was not informed of the true nature of the campaign before or after the production.

FORMER Free National Movement Senator Dr Duane Sands said he is now “absolutely convinced” that the Christie administration’s Stronger Bahamas initiative is nothing more than an attempt to mislead the Bahamian public.

Dr Sands was responding to reports that local actors and models used during the filming of the campaign’s controversial television advertisement were paid less than $100 for the two-day production.

The government previously confirmed an allocation of $4m to the Office of the Prime Minister for the 2015/2015 fiscal year for “advertisements and media supplements”. It is unclear just how much of this amount is being used for Stronger Bahamas.

Prime Minister Perry Christie, during his budget communication, said that the government made the decision to combine the $4m normally spent on public engagements, research and communication to fund a “national conversation”.

However, Dr Sands is offended by the initiative.

“The PLP government has sunken to a new low with this campaign,” he told The Tribune. “The PLP claimed that the Stronger Bahamas campaign was supposed to address the aspirations and hopes of Bahamian people. This is insincere.”

When interviewed by The Tribune earlier this week, one of the models featured in the heavily circulated ad said he was not informed of the true nature of the campaign before or after the production.

“We were told that it was a government initiative to promote Bahamian culture. When the prime minister made his budget communication, and the Stronger Bahamas (slogan) was used, that is when we truly realised what we were a part of,” said the model, who asked to remain anonymous.

The model added: “I felt misled and used. I don’t want to make it a political thing, but I just would have felt better if I knew what I was getting involved in.”

According to the model, a local talent agency was contracted through the Ministry of Youth, Sports and Culture to provide the “talent for the production”.

“The amount presented was under $100 for a one-day shoot. The production took two days, the amount remained under $100,” added the model.

Communications officer in the Office of the Prime Minister, Nikki Reid-Simmons, yesterday denied that models and actors had been “lowballed or taken advantage of”.

Mrs Reid-Simmons insisted that those hired were paid the going rate for talent in this market.

“They were contracted through a local agency, a Bahamian-owned local agency. All of the persons used signed an agreement and were paid in full before that ad ever aired,” she said.

“It has been a month since that ad first ran and this is the first I am hearing of this issue.”

Meanwhile, the model who spoke with The Tribune said those involved with the production didn’t raise an issue with the amount paid initially because they thought the production was going to be for a good cause.

However, the model said those feelings quickly changed when media reports claimed a foreign firm had been paid to produce the commercial.

“I quickly moved beyond the money issue because I could see that I was used as a political ploy. The models and actors used, we all came across as tools to push the PLP’s faulty message,” said the model.

After hearing the model’s claims, Dr Sands said: “To say this process is bothersome would be mild, this is clearly an abuse of public trust.

“The question now has to be asked, who benefited or who is benefiting, the local talent used were paid slave wages. The PLP has used this entire ordeal as a chance to play on the emotions and feelings of Bahamians at a time when there is a lot going wrong in the country.”

Members of the FNM have been critical of the Stronger Bahamas initiative from the beginning, with many in the party suggesting that the campaign was nothing more than government propaganda.

The government hired foreign firm Fleishman-Hillard to work on its new initiative with local public relations and media companies. It is unclear how much the foreign firm has been paid.

Of course it is an attempt to mislead, is that not the core of the party's values? Practices? Their primary operational tactic? But we eat it up like there is no tomorrow so who really is the problem? FMN is no better just for the record, really just horse* is different from Cow*