Bringing The Gift Of Hearing To Little Perron 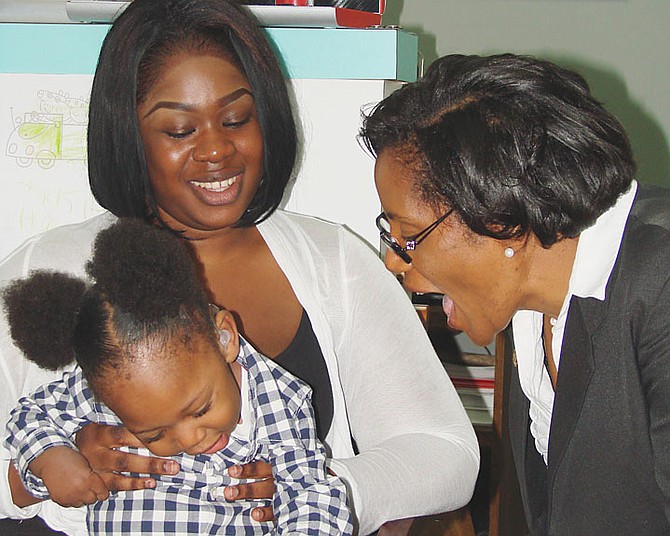 THE Rotary Club of East Nassau has donated free hearing aids and audiology services to a toddler suffering from a mild hearing loss.

One-year-old Perron Watson suffers from mild to moderate sensory neural hearing loss, meaning that soft speech, such as conversational speech, is impossible for him to hear.

As a result, his ability to speak would have been adversely affected, as he would not be able to hear himself and others to be able to properly develop.

On Friday, however, Dr Kim Scriven, who is in charge of the Audiology and Speech Clinic at Doctor’s Hospital, in conjunction with the Rotary Club of East Nassau’s Gift of Hearing programme, presented Perron with free binaural hearing aids - worth between $3,000 and $4,000 - and free service to help remediate his auditory defeciencies.

“What it does is amplify all the speech sounds that he’s missing or having difficulty hearing,” Dr Scriven said. “If you don’t hear those speech sounds you’re not going to produce it. So if he’s only hearing vowel sounds, vowel sounds will come out, so he’ll never be able to say ‘door’.

“We have fitted him with binaural hearing aids,

meaning two ears, and it’s important because the message crosses the brain at the same time. So we want him to be able to hear from the right and the left.”

According to Perron’s mother, Indira Butler, he was diagnosed at birth with pulmonary hypertension, causing him to have “tight lungs”.

Doctors told her that oxygen was not flowing throughout the entirety of his body, causing the left side of his brain to suffer damage, which then caused the right side of his body to be significantly weaker than the left.

Ms Butler said local physical therapists told her that due to Perron being incubated for three months, he would have to

get his hearing and vision checked.

She said she eventually went to Doctor’s Hospital and visited Dr Scriven, who informed her that Perron had suffered a mild hearing loss. As a result, Perron can only hear loud sounds, such as doors slamming and car horns. However, his ears cannot detect sounds made at the conversational level between two individuals, much less the subtle “baby talk” mothers typically engage in with their toddlers.

Dr Scriven at the time informed Ms Butler that Perron would need hearing aids - priced between $3,000 and $4,000 - as his hearing deficiency would eventually interfere with his ability to speak.

However, upon learning that she did not have the funds to pay for the hearings aids, Ms Butler said Dr Scriven placed her on a “special list from the Rotary Club.”

On Friday Dr Scriven fitted Perron with two clear moulds and a mild hearing aid, which would allow him to hear sounds in a normal capacity and potentially eliminate the risk of a bothersome speech impediment.

“I feel good he’ll be able to say ‘mommy’ and ‘daddy’ and stuff like that,” Ms Butler said. “It feels great that he got his hearing aid so he can say much more stuff.”

According to Dr Scriven, The Gift of Hearing programme has identified and assisted parents who cannot afford to purchase hearing aids since 2008. The Rotary Club purchases the hearing aids and Dr Scriven then provides free service at the audiology clinic.

The programme fits between 10 to 15 children each year with two aids each, with the total number to date being over 120 kids from New Providence, Eleuthera, Grand Bahama, Abaco, Exuma and Andros.