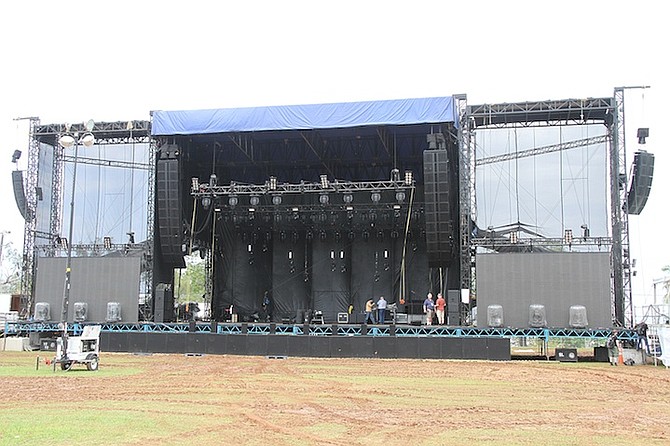 EXECUTIVES of the Bahamas National Festival Commission are confident that the proposed Cultural Village and other event sites will be completely ready in time for the start of the inaugural Bahamas Junkanoo Carnival Festival.

Ed Fields, a BNFC official, said the group is “deep in the throes” of getting the West Bay Street, Arawak Cay and Fort Charlotte sites prepared for individual events, set to get underway later today.

“It’s going to be wonderful. We have three stages, a Rake n’ Scrape stage, a Junkanoo Village stage and ‘Bahamia’ stage where we will have a number of events going throughout the weekend,” said Mr Fields.

He added that some events scheduled for this weekend will occur simultaneously, however, Mr Fields offered his assurance that each event will feature unique Bahamian cultural aspects delivered perfectly.

“(There will be) lovely art, foods and the traditional Bahamian fair, so this is going to be a wonderful experience for everyone.”

BNFC announced earlier this week that due to ongoing festival events there will be a number of road closures throughout the weekend around the Cultural Village site.

According to BNFC, all roads in the immediate area of the carnival site – West Bay Street between Nassau Street and Chippingham Road - will stay open to traffic flow up until 6pm on Friday.

Mr Fields said that at that time, all traffic commuting into that area will be diverted from West Bay Street on to Chippingham Road and then onto Infant View Road.

“If you are not coming to carnival, stay out of the area. You can take the Independence Highway if you want to traverse east to west because there are going to be times when the road is shut down,” warned Mr Fields.

Those road closures will take effect on Saturday, May 9, at 10am until 8pm.

Road Fever will feature 28 local groups or bands, all of which are locally owned and operated.

The Road Fever event will feature a competition aspect; awards will be given to the group that displays the best application of indigenous material and the best section costume; both of which will be prejudged before hand.

An award also will be presented for the best overall group.

Judging for the best overall group will be done on site, with all tallies to be independently confirmed by accounting firm Baker Tilly Gomez.

The inaugural Junkanoo Carnival got underway in Grand Bahama with the Music Masters semi-finals on April 17-18.

The rain of the last few days is very unfortunate indeed. It means that the grassed area at Fort Charlotte is already a quagmire, and will be ruined for months to come. For many people this is the only area they can take their daily walk or exercise on. All this is before thousands of spectators will tramp through the sodden turf.

But it does raise an interesting question,,,,,,,,I wonder if any of the Carnival millions will be spent on reparation work after the event, to maybe improve the infrastructure of some of the island's tourist spots? Probably not, and all we will have is a dirty mess to remind us of the Government's latest folly

I drove by Fort Charlotte weeks ago and I couldn't believe my eyes, all of the grass was brown. Who is responsible for taking care of that area? Landscaping requires more than a lawnmower. Grass has to be treated. Why does Cable Beach look the way it does and the rest of Nassau looks like an untamed dry desert? Fort Charlotte was in horrible shape before this event.

Stop hiring these bush landscaping people. There are certain jobs that you cannot give out to minimally skilled people, no matter how much you want to help.

That said Ed Fields says they are going to start a complete resurfacing when the event is over. Hopefully they do.

The government needs to regrass Clifford Park and relocate Haynes Oval to a new facility and create a good parking lot to accommodate the patrons of this evolving cultural site.

Then create a National Heroes Park adjacent to the Botanical Gardens and really make this a cultural centre ................... this area would be able to facilitate any major regional cultural event