The Island House To Bring Millions To Economy, Says Pm 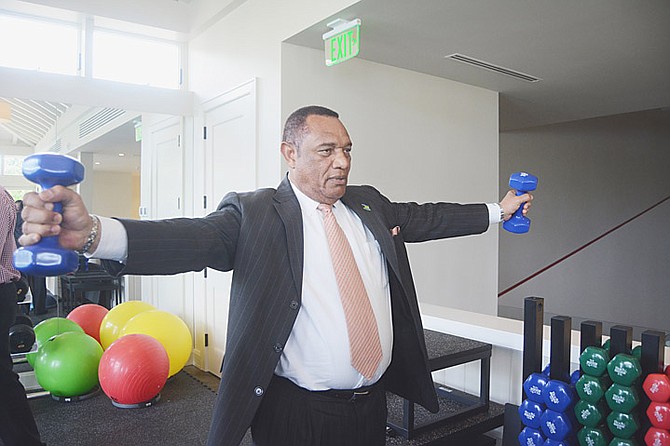 Mr Christie said the official opening of The Island House, a $40m, 30-room hotel owned by the Holowesko family, will provide a stimulus to the public treasury in the form of “direct wages, customs duty imports, Value Added Tax (VAT), and hotel taxes.”

Mr Christie also said with the opening of the Island House, New Providence is poised to boast an inventory of almost 11,000 hotel rooms by the end of the year.

At the official opening yesterday, Mr Christie applauded the Holowesko family for taking a decision to “invest in their homeland and to seek ownership in an industry traditionally dominated by international investors who have long capitalised on its benefits.”

“I also applaud the Holowesko family for showcasing our Bahamian culture by infusing local community patronage, the exhibit of local art and cultural interchange into their business model of the operation,” Mr Christie said. “This overlay of our way of life within activities and ambience of the Island House will bring genuine greet-and-meet charm and cultural focus to the extreme western tip of the island, and act as a local counter-point to the international flair of the larger hotel properties like Atlantis.”

There are also two restaurants on the property, Shima, which features Southeast Asian cuisine and the family-owned Mahogany House restaurant.

There are 128 employees currently at The Island House, Mr Christie said. Of those, only three are on work permits.

“So I again applaud them for believing in the capacity of Bahamians to manage their business while bringing a uniquely Bahamian experience to every facet of the organisation,” Mr Christie said. “After all, this is what people travel here for. Our beaches, our food, our friendliness, and our unique format and delivery of the Bahamian cultural experience.”

Island House Principal Mark Holowesko said the “success of Mahogany House and the introduction of The Island House demonstrates why we need to help promote small businesses and works in this country”.

“As Bahamians, we need a full complement of products, we need Bahamian products, and an understanding that small businesses worldwide are the foundation for sustainable growth and employment,” he said. “We offer, we hope, a world class product because we have world class people. And anyone who doesn’t think that we as Bahamians cannot compete on a global scale with the very best is just plain wrong. The people who work here have and will show this to be true.”

Yesterday’s official opening makes the Holoweskos the owners of two resort properties in the country, the other being the 23-room, all-Bahamian owned and operated Highbourne Cay Plantations on a private island in the Exuma Cays, according to Mr Christie.

According to Mr Christie, The Island House was recently featured in the Boston Globe daily newspaper at “virtually no cost to the operation”.

Mr Holowesko said that in the last issue of Travel + Leisure magazine, Mahogany House was listed as a top restaurant in the entire Bahamas.

The above photo will surely cause Christie's cardiologist to have a heart attack!

He's preparing to lift all the bags of money that will come from siphoning off the 'millions of dollars' that will enter the economy.

But also, good for the Island House. I think the upscale boutique hotel model is a very good fit in the Bahamas.

Any Bahamian who invests in the hotel/tourism infrastructure is to be commended ......... Building 20-room exclusive eco-resorts throughout the Family Islands will do far more than investing in foreign owned "mega resorts". Just look at the SE Pacific model ............... Musha Cay (Exuma) was just voted one of the best island resorts in the world ($60,000 per night!!!)

I agree. We need many more of these small hotels dotted around the islands instead of huge (ugly) colossi - BahaMar et al.

@duppyVAT - indeed. This is the model we should be following. The anchor project strategy was a load of nonsense from the get go. Zero Bahamian ownership, most of the revenue leaving the country, the creation of yet more armies of waiters and janitors. Neo-plantations - that is what those mega-resorts really are.

While I am not a cheerleader for the PLP, I must commend Mr. Christie here for a job well done.

The GOVERNMENT has tremendous power to STOP PROJECTS. Look at the development for east end Grand Bahama that has been simmering for well over 5 years now. It is even headed by a former MP and cannot get any traction.

Christie could have EASILY stopped this hotel from coming into existence and he chose not to.

For that I applaud him.

Christie didn't do squat! (No pun intended) Seriously, Private decision, Private money, personal vision. Something no politician can emulate or create, but have an extraordinary propensity to screw up!

That is my point. The GOVERNMENT has tremendous power to STOP PROJECTS. Look at the development for east end Grand Bahama that has been simmering for well over 5 years now. It is even headed by a former MP and cannot get any traction.

Christie could have EASILY stopped this hotel from coming into existence and he chose not to.

For that I applaud him.

I think many small out island hotels are run by locals. Amazing hypocrisy that he's Izmirlian sink.

I fail to understand the logic here. We should applaud the Prime Minister because he did not stop a project from coming into being? What utter nonsense! The Holowesko family should be applauded for believing that they can make a difference, despite Christie and his inefficient government. I don't believe that Christie is that powerful to stop a legitimate investment by any fiscally sound Bahamian. That is why we have the Courts, to review, and if necessary, overrule any dictatorial tendencies of the legislative. I'm sorry, my friends, Mr. Christie gets no credit for this investment; he will have to settle for the photo credit.

There are so many white, conchy-joe, Chinese, Jewish and black Bahamians with shit loads of money that do nothing but invest in wholesale and retail business ................ it is about time they get up of their millions and help to build the tourism, manufacturing, agriculture and industrial infrastructure of this country ............... Holowesko .... we applaud you.

MadHatter - As I understand it, Christie those had precious little to do with this project, and may not have even realized it was going on. I believe the permits were given under the former government. Christie just woke up last week, realized that this hotel was already opening, and scurried over there to get his face in the picture.

What the P.M. is really saying is "I so glad this open, something positive at last (even if it is die hard FNM's and conchy joes who did it), because now the treasury gone get more money for me to squander."