Life Of Crime: What Can We Do About Domestic Violence? 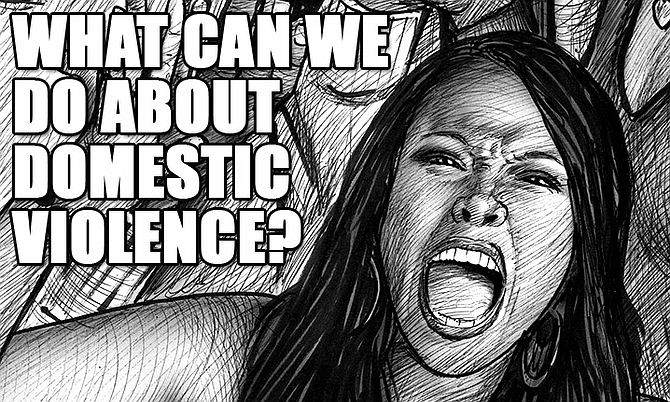 “I just came home with my girlfriend from a party, we had both been drinking and then I called her by the wrong name. She was furious and attacked me. I hit her and then pushed her away, she fell and hit her head, there is blood everywhere and she is screaming!

“I am sitting in my front room just after midnight, when a car drives up to the house opposite to me. My neighbour runs out of the house shouting and pulls his wife out of the car by her hair kicking her.

“My husband is very jealous and possessive. I look at the ground when I walk past men in case he thinks I am smiling at them. When the phone rings and it is a wrong number he thinks it is a boyfriend and there is a big fight.

What should I do?

“I am a corporal on the police and I have problems with my wife; she always rows me about everything. I just got called to a domestic dispute, I really do not want to get involved.

These vignettes are all real. The first guy should have called the ambulance and the police, even though he may have been arrested. He threw her out of the house and the neighbours called; he was still arrested.

The second respectable homeowner did nothing. He did not think it was his business and he did not want his neighbour to know that it was him that made the report. He should have called the police as she could have been seriously injured or even killed.

The lady with the husband who is so jealous demonstrates a very common problem; she and most others try to change themselves as the relationship continues to get worse. She and others must break the silence and talk to others about the problem, at least call a hotline, get some of it off your chest and get advice.

The policeman illustrates the reasons for the lackadaisical response of some officers to domestic violence. It is one crime that many of us can see ourselves. If pushed would we lash out as well, have we in fact ever hit someone we loved?

Oscar Wilde, the great Irish poet and playwright, served time for gross indecency; he was severely affected physically and mentally by his time in prison. He later wrote “The Ballad of Reading Jail” in which he relates the story of a man who was executed while Wilde was in prison. He was an army officer who had killed his wife due to her infidelity. The poem depicts the brutality of life and death for us all with the immortal lines:

Yet each man kills the thing he loves,

By each let this be heard,

Some do it with a bitter look,

Some with a flattering word,

The coward does it with a kiss,

The brave man with a sword!

Personally, I do not think that there is anything brave about killing, but the inclusiveness of his words are startling.

This fear that domestic violence is a family thing ... that could even have been us if the circumstances occurred. This makes us less likely to push for incarceration and find all sorts of rationalisations like “Why don’t they just leave”, putting the blame on the victim and enabling us to avoid involvement and action.

The campaign to stop domestic violence began as a women’s movement and deserves a great deal of praise; however, despite efforts to involve men, it is still wrongly seen as a “them against us problem”.

It should no longer be accepted as a woman’s issue. Even though most assaults are on women by men, it is clearly a societal issue. The violence and abuse within families impacts on us all, it leads directly to future violence with all the emotional and financial drain to us all. It will take societal action, men and women working together to change this destructive force. It is also the area of crime and homicide where prevention has been shown to work.

I believe that we need a clear set of laws, rules and guidelines that produce a plan that clearly sets out exactly what must happen in each reported case. The problem is so widespread around the globe that there are numerous programmes from which we could learn and choose.

There are pilot programmes of mandatory arrest for those who commit violence against a partner or ex-partner. This would require us to speed up the process of getting to court to protect witnesses and lessen attempts at revenge. Some countries are using a “Go Order” scheme, where the senior police officer can serve an order banishing a suspected abuser from having any contact with their partner for 48 hours, which can be extended to 28 days while the relevant teams sort out the best approach.

The police need clear guidelines as to their responsibility – if arrest or banishment is automatic it makes decision making easier. The Blueprint for Safety Initiative has been launched in a number of American cities and provides help for all agencies involved. The police are provided with improved training in evidence collection at the scene, better assessment methods – particularly in asking specific questions that go directly to risk assessment – and enhanced report writing.

The Barnet Council in London has a Safer Families Project. They recognised that serious cases must be handled by the police but felt that early intervention by supporting families in incidences of low level violence could reduce escalation. They provided funding for a project manager and three domestic violence workers, they used the Barnado multi-agency domestic violence identification scale to identify families. They took referrals from the police, midwives, health visitors, social workers and others and, out of 164 families they worked, only three escalated to serious violence.

There is still ground to be covered in education about domestic violence in a year when the NFL fumbled the ball with their policies and the Cleveland Cavaliers basketball team used violence as a totally inappropriate joke. Both have tried to put things right, but there should be no ambiguity violence against women is wrong.

The simple reality is that at least a third of all murders across the globe are related to domestic violence and this is an area where prevention programmes work. There is a need to teach non-violence at all levels and to teach and reinforce how positive relationships work. The recognition that a multiagency approach is essential has been widely accepted, but there are many areas where co-ordination and co-operation could be improved.

The key to success is this inter-agency response: from the first phone call to a hotline or emergency services there needs to be a seamless passage through the police, prosecution and appropriate disposal of the case with the clear objective of keeping victims safe and offenders held accountable. The police cannot do it alone, the courts are impotent without evidence, women’s groups are unable to solve it alone. It is the co-ordination, the willingness to look at the problem from different vantage points and bringing men and women together to protect victims and either help perpetrators or stop them from offending further.

NEXT WEEK: Sexual violence and is rape a crime in The Bahamas?

Somewhere along there, they should calmly and sensibly swat their behind to make their point more clear.

But NO - instead they keep saying it and doing nothing, until they "get vex" - and then they ill-treat / brutalize the child.

Young men remember this - if even only subconsciously - and when they grow up they take it out on another woman - getting back at that big monster (which women are in their eyes) who beat them as a child. This is even if they do not remember, or realize why they are doing it.