Life Of Crime: Gangland Bahamas - How Much Violence Can Be Put Down To Gangs? 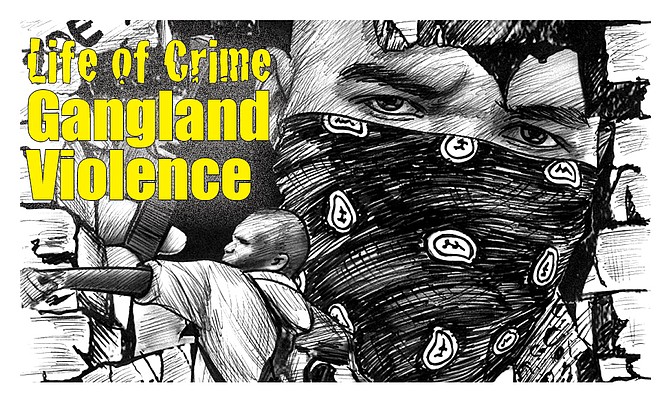 DR Mike Neville is a forensic psychiatrist who has spent 40 years – the majority in the Bahamas – working in the hospitals, courts and prisons at close quarters with offenders. The father of a recently murdered son, he is bringing his experience and expertise to bear in a series in The Tribune designed to inform an evidence-based national debate on how to solve the rising levels of crime here.

Week by week, Dr Neville examines the causes, effects and potential remedies of crime, from the cradle to the grave, looking at the reasons behind the increasing catalogue of murders, shootings, armed robberies and sexual assaults.

I READ all the time about gang-related crime in The Bahamas; in fact recently, a senior official went so far as to blame all killing on gang activity.

The publicity is so tenacious that I find it strange that I know very little about gangs in this country. Despite years working in Sandilands, visiting the prison and reading all the research that I can find, my understanding of Bahamian gangs remains vague.

As I read last week about the shootout between biker gangs in Texas, the gangs not only had names but wore them on their jackets. The reporters were able to give a detailed account of the history of each gang and the locations in which they operated.

It appears that most gangs want to be clearly identified as that helps create an aura of fear and power which helps attract recruits. The structure of Bahamian gangs, however, seems more like that of gangs in the United Kingdom which are thought to be more fluid; they often disappear or fragment and alliances can change rapidly.

There can be no question that gangs present a major threat to the chance of The Bahamas returning to the time when it could be regarded as a peaceful community. I believe that a greater understanding of the scope and function of gangs is needed if we are to prevent the growth of the gang culture and it is important that we examine strategies to effectively prevent and manage the growth of this problem.

Carlos Reid, the pastor and reformed gang leader, has written extensively about gangs in The Bahamas. In 2010, he estimated gang membership to be at 20,000: if correct this would be a huge figure when considering that gang membership is predominately between the ages of 14 to 35. His figure would represent a large number of our youth.

In 2013, he wrote that “four major gangs had moved from youth gangs to enterprises, suggesting an increase in criminal activity and financial emphasis”.

I suspect that this type of criminal gang became associated with drug trafficking, which has been with us from the 1970s. The drug trade has also encouraged organised crime to flourish in The Bahamas and the rest of the Caribbean. Gangs have been formed all over the world for centuries, many of their names are well known and have even been immortalised in movies.

An academic definition of a youth or street gang was proposed by W B Miller writing for the office of Juvenile Justice in 1992: “A self-formed association of peers, united by mutual interests, with identifiable leadership and internal organisation, who act collectively or as individuals to achieve specific purposes, including the conduct of illegal activity and control of a particular territory, facility or enterprise.”

It is certainly a bit of a mouthful and may not make much sense to many local gang members but it explains what is necessary to be classified as a gang. It also helps us begin to understand some of the reasons that youngsters may join a gang, especially “the need to belong”.

The perception is that gangs can offer protection, respect within their community, money and a sense of power. This makes gang membership attractive to kids who do not feel that they belong or are a part of society. The breakup of the extended family unit, the erosion of the educational system, youth unemployment, dissatisfaction with traditional religious values and ever-increasing poverty have all created the ideal atmosphere for gangs to flourish. There has always been a strong association between immigrant groups who feel excluded and vulnerable and gang recruitment.

In the 1970s, criminal gangs did not seem to be regarded as a problem in The Bahamas. However, the 1980s and 1990s saw the explosion of drug trafficking and gangs were needed to control the local transhipment and distribution networks.

This enterprise created millions of dollars some of which entered the local economy; certainly the flow of money seemed to be tacitly approved by some in society. The income, of course, went mainly to those who were part of the trade and this enabled the gangs to recruit new members and increase their power within the community.

However, unlike American gangs, there has not been a permanent presence of specific gangs, with many of the older gangs becoming obsolete and their names changing regularly.

There does, however, seem to be some more sinister developments with the emergence of gangs with international links that also have very violent reputations. These include the “One Order” gang which is active in Jamaica and the “Zoe Pound” gang known in Miami and along the Florida coast.

Another concern is the treatment of women: not only are they complicit in concealing weapons but the macho image of the gang culture encourages physical abuse, emotional abuse and even rape. All this while the age of gang members is becoming younger with kids excluded from primary and secondary school becoming easy targets for recruiters.

There has been some success across the Caribbean in arresting and imprisoning a number of notorious “older” gang leaders and drug lords; however the removal of these despotic men usually creates a power vacuum which is filled by a younger gang member. We all know that younger men tend to be more volatile and much more likely to use violence to increase their fragile self esteem and their desperate need to have respect within the gang.

They are much more likely to react to imagined acts of disrespect and retaliate in a particularly violent fashion to demonstrate their power.

This would again suggest that our present “War on Crime” and using only enforcement strategies is not likely to produce any long-term change. Each success will only increase the likelihood of younger, nastier leaders taking control; as long as the money is flowing in response to their illegal enterprises the criminal activities will continue only the players change.

Do we throw up our hands and say there is nothing that can be done? Do we continue to push the myth that all violence is gang related?

Crime is also related to greed and envy, which can occur without gangs.

We also have many wonderful youngsters. We must not look at all of them as gangs, even if fear can be politically expedient.

These may well be the present policies but this country deserves better and there are plenty of other places around the world which have struggled with similar problems. There are public health initiatives that view violence as a contagious disease; the idea is to prevent transmission by what they describe as “violence interruption”. Members of the community work with victims, friends and family to reduce revenge violence and the ongoing research should prove interesting.

A programme started by a policewoman, Karyn McCluskey, in Glasgow, a Scottish city with a population of about 600,000 may be of value here. The city used to be the murder capital of western Europe but, over the years, violent crime and murder rates are down and it seems to be largely due to the development of the police’s “Violence Reduction Unit.”

She speaks of “violence working like an infectious disease, it is passed on. You may suffer abuse as a child and believe that nobody cares about you. You are incapable of empathy and hardwired for violence. There’s the search for a thrill, the sensation seeking. These young men are not equipped to make good decisions for themselves, they are just caught up in the gang dynamic.”

• A zero tolerance police warning that if violence does not stop, life will get very tough for every single gang member.

• A pledge from assorted agencies and charities that if youths do leave violence behind, they can get help in education, training and job finding.

• Involvement of the local community in real life discussions, with the youngsters having to listen to their peers, family and friends.

The scheme has expanded to include a family centre for children under five, a play centre for children up to 12 and other outreach initiatives. Many of the mothers suffer from depression, substance abuse and are victims of domestic violence themselves; it is surely obvious that they, too, must be helped for the programme to work.

Programmes in early childhood are the clear route to prevention; if gangs are starved of members, if there are fewer newer recruits, they will lose power and influence.

These programmes will need to be properly funded and it will be many years, most likely after the next election cycle, before the benefits will be seen.

There is no need to accept this programme is the best for The Bahamas: there are many others. Perhaps the Royal Bahamas Police Force would consider sending a team to Scotland to study the programme and even modify it for our local needs.

I am not a gang expert. However I do know that all crime and mayhem is not caused by gangs, however early prevention is similar for all violence. I am sure that to do nothing continues to demonstrate support for gangs and the myths that surround them.

NEXT WEEK: mental disorders and offenders in The Bahamas.

For previous articles in the series see tribune242.com and look under the Editorial section.

I think that gangs validate the existence of the marginalised young Bahamian male. Very little else in Bahamian society does.

The time to address this was in the early 80's, almost 2 generations of kids have been born and socialized in this toxic environment of fatherless homes, poor education, and poverty since then and are now adults parents of the other. That leaves us neck deep in this pool of ignorance, violence and corruption. There is no magic formula that will allow us to erase the social destructive tendencies of 2 generations of people.