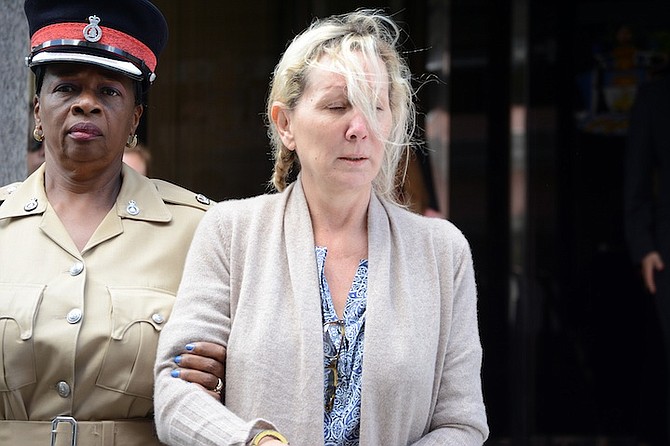 Donna Vasyli outside of court.

THE Court of Appeal yesterday dismissed a bail appeal by Donna Vasyli, the Australian accused of murdering her husband, but her legal team may take the case to the London-based Privy Council for a final decision.

The appellate judges rejected the 54-year-old widow’s appeal by a majority two to one vote at a hearing at the Court of Appeal yesterday morning.

Murrio Ducille, Vasyli’s attorney, told The Tribune that this now allows his client, the wife of deceased millionaire podiatrist Phillip Vasyli, to exercise her “further right” to appeal to the Privy Council to have her request for bail granted.

On March 24, Mr Vasyli was found dead at the couple’s Old Fort Bay home with multiple stab wounds. He was the owner of four podiatry clinics - three in Sydney, Australia and one at the Old Fort Bay Medical Centre in New Providence.

His wife has been on remand since March 30 when she was arraigned in connection with the murder. However, she has since applied twice for bail to the Supreme Court.

Vasyli’s lawyers filed documents in the appellate court on May 4, days after Senior Justice Stephen Isaacs, who was ordered by the Court of Appeal to reconsider his initial refusal of bail about a month ago, denied bail a second time to the accused.

Last week, this newspaper reported that Vasyli said she would submit an alibi to the Office of the Attorney General in 21 days.

The chief magistrate further instructed the accused that she could not offer an alibi at trial if she did not enter one at the VBI presentation or within 21 days to the Office of the Attorney General.

After consulting with Mr Ducille, Vasyli chose the latter and is now scheduled to appear in the Supreme Court before Justice Bernard Turner on June 12 to receive a date for trial.

She will be allowed to enter a plea to the murder charge at her Supreme Court appearance.