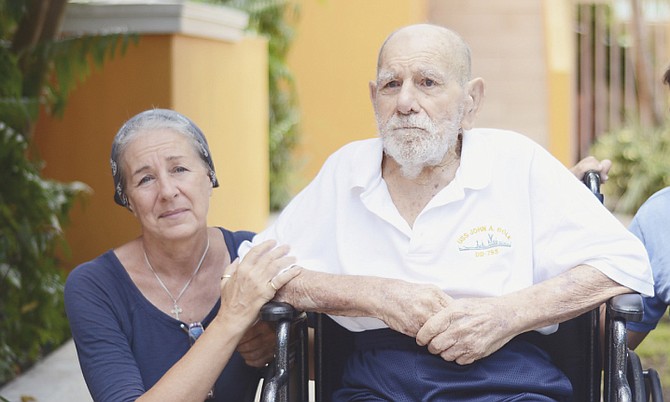 Fiona Maillis with her father-in-law Anthony Maillis, a Second World War veteran, whose care needs after being displaced in the wake of Hurricane Joaquin leave the family feeling trapped in New Providence. Photo: Shawn Hanna/Tribune Staff

HURRICANE displaced families remain handicapped by the devastation wrought in last month’s category four storm as they struggle to care for disabled or elderly dependents.

Nicholas and Fiona Maillis told The Tribune they felt trapped in New Providence, as they are unable to afford respite care for their 97-year-old father and World War II veteran Anthony Maillis.

It is a circumstance that has stunted their ability to return home to Clarence Town, Long Island to begin restoring their home and fully heal from the traumatic experience of Hurricane Joaquin.

“I want to go home. I want to be able to do the things I need to get us back to normal. I saw my friends yesterday, they both have handicapped children and my friend Sharon, and she’s so exhausted because she doesn’t have a home.

“They don’t have an income. She’s got three children who have learning disabilities so she chose to homeschool them. Her youngest is disabled, she has a severely handicapped daughter and Social Services doesn’t know where the disability cheques are.”

“So the money that is vital to them is back and forth and they’re stuck in Nassau,” she said. “All they’ve had is rumours that their homes have been condemned but no NEMA, no RBDF, no official has come and said we’ve assessed your house and this is what. They’re in limbo.”

“I looked at Sharon’s face and in that moment she didn’t know what the next moment was going to hold, whether there was going to be an answer for her,” she added. “All she could say is I don’t have a home, we don’t have an income, we are just here. She’s staying with family here. She looked void, vacant, empty, desperate.”

Fiona and her father-in-law, who suffers from dementia, were airlifted out of Long Island by helicopter in the days following Hurricane Joaquin. She has not seen her home for more than a month.

Nicholas, 61, stayed behind to assist with emergency efforts in the immediate aftermath of the storm when communication was sparse and chaotic.

The thought of her storm-ravaged home and belongings lying exposed and neglected is a major source of anxiety and frustration; however, Fiona acknowledged that her plight is significantly better than some of her close friends that saw their homes completely destroyed.

The couple is extremely grateful for the assistance they have received from family members, loved ones, and the community.

“There are so many other elderly people,” Fiona said, “so many families with disabled children who are in similar situations because they have this dependent that cannot cope for themselves.

“They haven’t had any support from Social Services - my friend Sharon’s house was underwater. She had to float her elderly mother on a piece of floating pallet and her disabled daughter out of there in the middle of the storm because the water had gotten too high and they couldn’t stay. I don’t know that the government is thinking about these things. There are so many people that don’t have an income right now, that don’t have a home.”

The storm also wrought havoc on Anthony Maillis’ mental stability, which has seen a decline over the past two years. The death and funeral of his 99-year-old brother, former PLP Senator Alexander Maillis, days after the storm left him even more fragmented, according to his son Nicholas.

The World War II veteran served under the United States Navy and survived the kamikaze attacks of Japanese aircraft in the Pacific Ocean.

However, he does not receive any pension for his service and his only income is his National Insurance benefit.

As the family rode out the storm, Mr Maillis had to be confined to one side of his bed as the floodwater rose in the home.

After the hurricane passed, Nicholas said his father remained in a catatonic state for two days.

“The thing with dementia is the more unfamiliar and pressured things become, the more the brain breaks down,” said Fiona, “so he went through the fear of the storm, coming out and seeing everything disastrous, and then being on a helicopter coming here, all that disruption. For those first two weeks his mind was just a scramble, there was this fear response, and the least little stress or pressure sends them into aggressive or defensive behavior and agitation.

“There was no help, no one I could call and say I’m having a meltdown. I’ve gone through this storm too, I might be getting PTSD (post-traumatic stress disorder). Things are calming down but even so I want to go home.

“We’re still in an upset, he’s still in an unfamiliar situation, and even if we get a caregiver it’s not really going to help at the moment but it will help in the long-term so we can get him back to what’s familiar,” she added.

Fiona and Nicholas are the owners of the Bahamian Calendar, a publication that will see its 30th anniversary in 2017. They have survived numerous hurricanes on Eleuthera, including Andrew, Floyd, and Irene.

When they moved to Long Island, Nicholas said that building a strong home on high land was a top priority for him. He said that he hoped Hurricane Joaquin was serve as a wake-up call for the entire Bahamas on the need for experienced and organised emergency response, and updated building standards.

“I thank God I am alive,” he said, “and I have a chance to try hard again and stay in this world. Everything can get broken up around you but if you’re left alive, you have a chance to start over again. Now this has woken up everybody, what if something like this hits Nassau? Is Nassau ready for that?

“What would happen to Nassau if a category four or five came and sat on it for two days? Are we ready?”

Meanwhile Christie and his elitist cronies are living high off of the broken-backs of decent honest hardworking Bahamians who are finding that no matter how hard they work, or how much they must now do without, they will never be able to make ends meet or help the most needy in their families!

Where is Butler Turner in all of this, and Father Cartwright?

Some body I do not care who the Church, The Government MS :Butler . Father Cartwright get on the ball and help this family and no pictures or speeches just make sure they are helped right away.