Updated: Donna Vasyli Sentenced To 20 Years In Prison For Murder 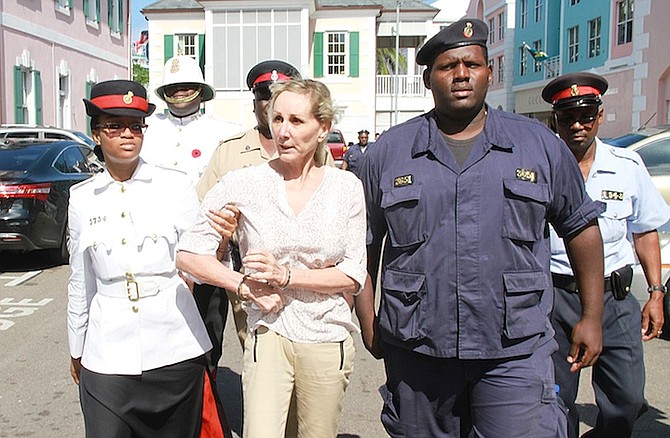 Donna Vasyli pictured outside of court in 2015.

AFTER she was sentenced to 20 years in prison for the stabbing death of her millionaire husband, an attorney for Donna Vasyli said her legal team intends to challenge the guilty verdict of a jury that the widow felt “betrayed” her.

Vasyli, 55, had no emotional reaction to the sentence, unlike her previous court appearance when she collapsed in anguish after being convicted of the murder of Philip Vasyli, an Australian podiatrist.

Acting Chief Justice Stephen Isaacs took a half-hour recess to consider her lawyer’s call for her to receive stringent probation and the Crown’s suggestion of a 30 to 60-year custodial sentence.

Vasyli’s lawyer Murrio Ducille immediately informed the judge of his client’s instructions to contest the conviction to the Court of Appeal, which he has 21 days to do.

Speaking to reporters on the judge’s decision not to grant the request for probation, Mr Ducille said: “The judge has to do what he has to do and then we do what we have to do.

“That’s totally within the judge’s discretion and having regard to the regime of sentencing, I think that he has done the best that he figured he can do.”

As for his client, who returned to custody on October 1 following the guilty verdict, Mr Ducille said: “She’s doing good.

“Her posture has certainly improved. She has come to accept certain realities until such time when she can be vindicated.”

When pressed on the widow’s sentiment to probation officer Janice McKenzie that she felt “betrayed by the jurors who convicted her with no evidence,” the lawyer said: “That’s her view.”

“She’s entitled to that but the system, you have to accept certain things from the system and that’s about it,” he added.

Concerning her appeal, the lawyer added: “We’re on our way to do that.”

He would not say what possible grounds of appeal the legal team intends to advance.

Mr Vasyli was found stabbed to death on March 24 at the couple’s Old Fort Bay home, located inside a prestigious gated community.

At trial, the jury saw the widow’s videotaped interview while she was in police custody. During that interrogation, a police officer suggested to the widow that she stabbed her husband for embarrassing her in front of houseguests with his drunken state. She strongly denied the accusation in the presence of her lawyers at the time, Elliot Lockhart, QC, and Judith Whitehead.

During that interview, Vasyli told police that her husband had been drinking and fell down the stairs – shattering glass from picture frames along the way – hours before his dead body was found.

She added that he was walking around the house looking “disgusting” with his pants hanging down even though she told him guests were coming to the house. However, she said, she did not argue with her husband.

During the trial, the Crown also called Constable Jermaine Knowles to the witness stand who said he saw Vasyli in the main house after the murder. He claimed Vasyli told him “we had a fight last night.”

During closing arguments, Mr Lockhart said the murder weapon did not have Donna Vasyli’s DNA anywhere on it nor were police able to find a fingerprint of his client at the crime scene.

He invited the jury to acquit his client of the charge because the Crown’s case “logically does not stand up to scrutiny”.

Meanwhile, Neil Braithwaite, one of the Crown’s prosecutors, told the jury that the accused was trying to conceal her crime as a number of her claims in her record of interview did not match up with the statements of other witnesses.

“She’s lying to cover up what she did to her husband, it’s as simple as that,” Mr Braithwaite said.

In yesterday’s sentencing proceedings, Mr Ducille “commended” the report of the probation officer to the court for consideration of sentencing.

“I wouldn’t find a more favourable probation report one could have,” the lawyer said. He added: “There’s nothing to indicate that she’s a peril to society.”

Mr Ducille invited the court to exercise its discretion and impose probation for his client pursuant to Section 124 of the Penal Code.

The lawyer highlighted the case of Heastie vs Regina where the female convict was given five years for probation.

“She offered the defence of battered spouse syndrome. But your client’s defence is quite different,” the judge noted.

Mr Ducille accepted the point but said it did not stop the court from suspending a prison sentence for first time offenders.

“Donna Vasyli is a first time offender notwithstanding the gravamen of the charge,” Mr Ducille added.

In response, Acting Director of Public Prosecutions Garvin Gaskin urged the court to impose a sentence of 30 to 60 years.

Mr Gaskin also asked the court to bear in mind the “inherent consequence” of Vasyli rejecting the jury’s finding.

“An inherent consequence of rejecting the jury’s verdict means that the convict has not demonstrated any remorse,” the prosecutor submitted.

After a 30-minute break, the judge made his ruling.

“Notwithstanding that the description of Mrs Vasyli by those interviewed is incongruent with her actions as stated by the probation officer, the court is not permitted to look behind the verdict of a jury. Whether or not the jury’s verdict ought to be disturbed, given the evidence presented, is a matter for the Court of Appeal,” the judge said.

“The circumstances of the offence cannot be put higher than a domestic dispute gone horribly wrong. This factor leads to the conclusion that Mrs Vasyli is not a menace to society. I’m fortified in this view by the fact that she has no antecedents. Her record to date has been clean,” the judge added.

“That section clearly speaks to the powers of the court to release on probation persons convicted of any summary offence but this offence is an indictable offence,” the judge noted, adding that there was nothing “trivial” about murder.

He added: “Taking into account all of the circumstances, I hereby sentence Mrs Vasyli to a term of imprisonment of 20 years. That term is reduced by the five months she spent on remand and is to run from today’s date.”