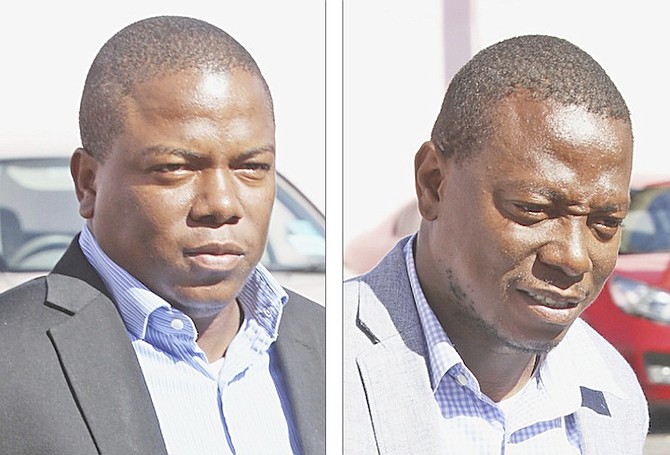 A JUDGE yesterday denied bail to a contractor accused of having a role in the killing of a construction worker after lamenting the “record rate of murder” and a “consequential depreciation in public safety.”

Supreme Court Justice Gregory Hilton had been asked by attorneys Murrio Ducille and Krysta Mason-Smith to grant bail to 39-year-old Dwayne Heastie, one of two brothers awaiting trial in

connection with the September 18 fatal shooting of Jean Richmond.

The attorneys, among other submissions, asked the court to consider the declining medical health of the applicant who, according to forensic psychiatrist Dr John Dillett, is “undergoing significant emotional stress” and “developing a depressive episode.”

The judge, however, found that “while there is a concern, in my view, there is not sufficient evidence of a medical nature to cause the court to be moved to grant bail to the applicant on this basis alone.”

“In the present state of circumstances in the Bahamas, there is a record rate of the offence of murder. There is a breakdown in public order and a consequential depreciation in public safety,” the judge added.

It is alleged that the pair, concerned together, intentionally caused the death of Richmond.

It is further alleged that they were in possession of an unlicensed 12-gauge shotgun and six shotgun shells for the weapon, neither of which were they legally authorised to possess.

They will not be allowed to enter a plea to the charges until they are formally arraigned in the Supreme Court. They are currently in custody of the state.

According to initial police reports, shortly after 11.30am on the day in question, two men were involved in an argument at the exclusive Palm Cay community off Yamacraw Road that resulted in one being shot with a shotgun.

Richmond died at the scene after being shot in the head.

In the October 29 and November 5 bail proceedings before Justice Hilton, lawyers for the elder sibling argued that the applicant was a fit candidate for bail based on the criteria set out in the Bail Act, 2011 and prior Supreme Court and Court of Appeal decisions.

They argued that Heastie has substantial ties to the jurisdiction being Bahamian, married with three children who depend on him and the income he brings from his construction company that also employs 250 persons.

His lawyers also argued that since his remand, Heastie’s health has deteriorated and that his livelihood is in jeopardy due to his continued incarceration.

They further noted that Heastie had a constitutional right to bail and was willing to abide by any conditions placed upon him and would appear whenever required to attend court.

Crown prosecutor Patrick Sweeting, however, objected to bail for the accused on the basis that the offences Heastie is charged with are very serious and warrant his continued detention until trial.

Mr Sweeting contended that the Crown’s case against the accused was “cogent” enough to believe that Heastie will abscond if granted bail and may interfere with witnesses in the case.

The crown respondent also argued that there has been no unreasonable delay in the case and that the court was duty bound, when deciding on bail, to consider the need to protect the safety of the public and/or public order.

“The proper test of whether bail should be granted or refused is whether it is probable that the defendant will appear to take his trial (as) bail is not to be withheld as a punishment,” the judge said, highlighting the authority case of Jonathan Armbrister v the Attorney General.

“It is clear that the onus is upon the Crown to satisfy the court that the accused person ought not to be granted (bail) and that the standard is on a balance of probabilities,” the judge added.

The court noted that the Crown intends to rely on the evidence of an eyewitness who accompanied the deceased to the workplace of the bail applicant on the day in question.

With a dispute on the account of what was said and/or heard prior to the fatal shooting, the judge said: “The court will not delve into the truth of the evidence.”

“It is also accepted that the seriousness of the offence is not an independent ground for refusing bail but is a consideration in determining the issue of bail. The right to personal liberty is an important constitutional right and a defendant, who is presumed innocent, should remain at large unless it is necessary to refuse bail in order to serve one of the ends for which detention before trial is permissible (as) each case is individual and needs an individual assessment.”

“The court also has to consider the character and antecedents of the applicant. In this application, the court takes note of the fact that the applicant has no previous convictions or other pending matters and also the apparent good character and positive attributes of the applicant who is married with children, the owner and operator of a business employing numerous persons and a coach of a junior baseball league.”

Justice Hilton, having regard to all of the circumstances relevant to the proceedings, refused bail because of the seriousness of the offence, no unreasonable delays in the case that is likely to be heard in 2016, the incentive for the applicant to abscond and that the “existing need for public order and public safety is paramount.”

Heastie can contest the court’s decision to the Court of Appeal.

Good!! Blow the damn mans head off with a shotgun...after you short paid him his wages...stay your asp in jail!!

This matter is sub judice and comments should not be allowed - get your act together Tribune.

I agree. The Tribune's bias always seems to rear it's ugly head in what they report or leave out of their reports. Had this situation been opposite, I have no doubt commenting would have automatically been disabled.

I agree, several times I thought a topic would be at least allowable to discuss but the section was disabled and this story being worst than most is allowed comments? smh

Does this man not realize that he is safer in jail???

If you value your life, jail is the safest place right now. There are no guns in jail. But in the streets of Nassau, there are thousands.

Investigative journalism is surely lacking, getting news from police briefings & court arraignments is not journalism, give us the inside scoop, hidden facts obtain by putting forth extra effort. Background of the parties involved including any violent pass not reported. Help us understand how this dispute escalated to a killing. Was this an ongoing issued? Where there threats? News outlets in the U.S are like hound dogs looking for facts and exposes & report independent facts many times not uncovered by law enforcement. Good investigative journalism is necessary in keeping balance by ucovering details, ensuring fairness, transparency, rule of law, and keeping the system honest by keeping public aware. How do we know if justice is being upheld or whether someone has been denied or granted bail fairly? Guess we'll have to wait for the court in 2 years to get the more facts, at this point don't have any idea based on reporting whether this is murder or self defense.

the murder rate high enough with out snoopy investigative journalist...

"They further noted that Heastie had a constitutional right to bail and was willing to abide by any conditions placed upon him and would appear whenever required to attend court."

Willing to abide by any conditions place upon him? He wouldn't obey the law of NOT murdering someone, but he will abide other conditions??? LOL

Truepeople, it gonna get worse regardless. To many fatherless young men with poor socialization, no direction, no education or poorly educated, no job, no hope, sitting up on the block or living in abject poverty. More babies are being breed in these conditions and what the party tribalist loyalist forget is the fact that we live on small islands where we may think we're safe behind gates but its only a short distance to our door step. High crime is only the symtom of the disease brought on by 40 years of unchecked corruption from our leaders. In 2015 the disease is worse so Investigative journalism will just gives us tribune readers more facts to answer questions ourselfs.